Ocean Township — May 14, the residents will have to decide which of the nine people running for council will get the five seats up for vote. Ocean holds nonpartisan elections, meaning it does not matter what political party affiliation they have. 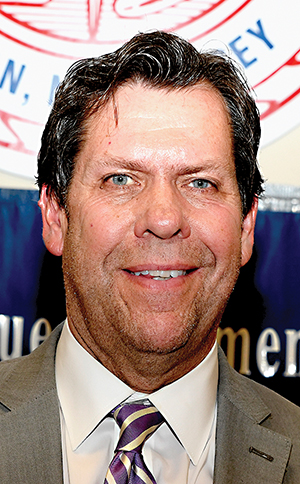 On May 6, there was a meet the candidate forum, moderated by The League of Women Voters at the Board of Education building on Monmouth Road. It started promptly 7 p.m. and the seats in the room quickly filled, resulting in residents standing along the interior walls.

A unique dynamic has occurred this election cycle, with one incumbent on a different ticket than he was last time.

Four out of the five incumbents are seeking reelection; however, one of those is not part of the group ticket.

The last election had Christopher Siciliano winning with his team Donna Schepiga, John Napolitani, Robert Acerra and Richard Long, who is the one not running again. (In Ocean, council chooses who will be mayor among themselves, the office is not chosen directly by voters.)

Siciliano decided to put together a new ticket for 2019. He removed Acerra and since Long is not running he selected Dr. David Fisher and Dr. Margie Donlon, who will join incumbents Schepiga and Napolitani.

Acerra feels that he was removed from the Siciliano ticket as retribution, and that the mayor was pressured by Senator Vin Gopal because he ran for Assembly against Eric Houghtaling and Joann Downey in 2017, who are both in the same political party as Gopal.

Monmouth Musings reported that Siciliano did not deny that Gopal wanted Acerra off the ticket, but said that is not the only reason he removed Acerra from his team. “Rob is a nudge,” Siciliano told Monmouth Musings. “He went against me too many times and grandstanded. I decided it was time for new blood.”

Siciliano said he felt Acerra was not committed to the township after he made an assembly run. “He ran for higher office before completing his first term, past legislators from Ocean, like Joe Palaia and Dan Jacobson, completed terms before running for the legislature. I want committed people to my team,” Siciliano told Monmouth Musings.

Acerra has joined forces with Victor Ashkenazi. Two others have also joined the race for council, Jacquelyn Wenzel and Raymond Pogwist, each running independently.

The forum’s format allowed each of the candidates to make a 60-second opening statement. Then the moderator would ask questions submitted by residents, asking each candidate to respond. Only eight candidates attended at the forum. Ashkenazi, according to the moderator was sick and unable to attend.

After two hours of answering questions, it was obvious that residents had eight highly qualified people seeking five seats. Some of the hot topic issues were taxes, over development, flooding, traffic delays, over population of deer in the township and Deal Lake.

Siciliano, Donlon, Napolitani, Fisher, and Schepiga all support the current administraton’s vision for Ocean. Differences between the incumbent ticket and the other candidates had to do with environmental issues, taxes, health insurance, and transparency.

In terms of the environment, one candidate stood out. Pogwist, who is an employee of the NJ Department of Protection, is passionate about green space, which he says Ocean has very little of. He was also very clear on his stance on flooding, saying that trees should not be cut down, and the fee to do so should be higher.

Acerra and Siciliano disagreed on spending money to improve the parks and playgrounds and development. Acerra stated that he was the only councilperson who voted not to sell one of the only open space site remaining in the township. The property is located on Roosevelt Avenue and Acerra said he would always vote to preserve open space.

Acerra also felt that the township has $8 million in surplus, which could help repair the playgrounds and parks.

Siciliano sharply disagreed. “That would be a mistake. We use it to keep the budget down, about $6 million a year for that. And during my tenure as mayor we have pitched three zero tax increases,” said Siciliano.

A question came from the audience about two of the five on the governing body receiving health benefits. Siciliano stated he was one of the two who were grandfathered or the exception to the rule, which does not allow any elected official to receive health benefits.

“I collect $9,700 in health benefits from the township. I am on my phone all day and answering emails and talking with residents, and I feel that I have earned those benefits. Being mayor is a lot different than a councilperson,” said Siciliano.

The other councilperson getting health benefits at a cost of $20,000 to the residents was Schepiga. “I also feel that I have earned the benefits. I run all the events for the township. Do you know what it would cost to hire someone to organize all these events? Their salary and benefit package would exceed what I am allowed,” said Schepiga. She added that she pays 3.5 percent of that cost, which is in accordance with New Jersey law.

Wenzel, who stated she is the newest member to the township seeking election as she has only been in the township for 22 years, attends all the meetings and would like to see more transparency in how items are voted on. With a history of working in high-end fashion and traveling the world, she feels that she can bring new fresh ideas to the council.

“I just want to say that on May 14, you don’t have to vote like it’s a menu. You can vote à la carte, picking from the ballot you want,” said Wenzel.

The ballot position for the May 14, election has Siciliano on line 1, Donlon is line 2, Napolitani is line 3, Fisher on line 4, and Schepiga line 5. Pogwist is line 6, Wenzel is line 7, Acerra on line 8, and Ashkenazi is line 9.

Residents have the ability to vote for individuals and do not have to select entire tickets. They can pick up to five people.

Moreover, after watching the forum, they have eight highly qualified, willing and able candidates to choose from.