Laurino Farms cares for the produce and the community

Bob Laurino’s decision not to use chemical products on his crops began after a tragic event: The death of his father, the former owner of Laurino farms. 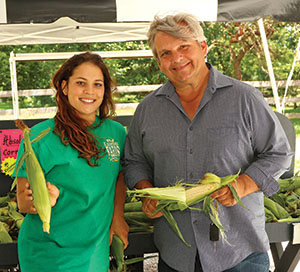 Fresh Jersey vegetables and fruit are available, as are friendly faces and knowledgeable help.

While Laurino says he can’t confirm for sure that his father’s throat cancer was due to the use of chemicals, he has unfortunate memories of his father spraying his fields with weed chemical controls, all while doing so without a mask.

“I’m sure those chemicals did irreparable harm,” Laurino said. “After his passing, I decided I would change my whole operation and, while a lot of work, I’m so happy I did.”

To operate a chemical-free farm, Laurino’s day starts at 6 a.m. every morning. Using a tractor, he cultivates his fields until 7:30 a.m., when he begins to open his farm stand. He and his crew start packing their vegetables for delivery around 9:00, spending the day running back and forth to the fields to bring in freshly picked vegetables. After the farm stand closes at 6:30 p.m., he goes back to his tractor, working the fields until around 8:30-9:00 p.m.

“Go home, shower, paperwork, and I’m in bed by midnight,” he said of his routine after the workday is over.

Laurino comes from three generations of farmers: His grandfather came from Italy, starting the family tradition of farming. Today, Laurino’s mother, Maria, continues to work at the farm with him.

“My mother Maria has been there since the beginning with my dad, and even now she is at the farm almost every day and I couldn’t do it without her,” Laurino said. 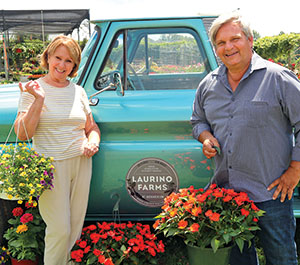 To help those in need, Laurino Farms has partnered with the Hockhockson Farm Foundation and Lunch Break to give low-income families access to fresh fruits and vegetables. The program is called Caring Sharing Agriculture and gives those who donate the opportunity to give a share of fruits from Jersey Grown and vegetables from Laurino Farms.

“Lunch Break with Gwedolynn Love, and her great staff and caring volunteers, already do such a great job of helping those in need,” Laurino said. “Being able to work alongside them and Jon and Tracey Stewart’s Hockhocksen Foundation, well, it was a no brainer.”

Laurino says that he also leases his farm from the Stewart family (Jon Stewart is best known as the former host of The Daily Show) and praised the amount of good work they do for the community, from helping abused animals to aiding local families who need food.

What is most amazing is they do a ton of this, yet never attach their name to it,” Laurino said of the Stewart family. “They do it anonymously, so the public only sees a small fraction of all they do.”

For over 30 years, Laurino worked alongside his father to help make the farm the success it is today. Now, the responsibility to maintain it is on him.