Long Branch – On Monday, May 18, the city held a virtual meeting to discuss the master plan. “It is our vision for the next 10-years,” said Mayor John Pallone. He added that they do not see any major changes in the planning or zoning within city limits. 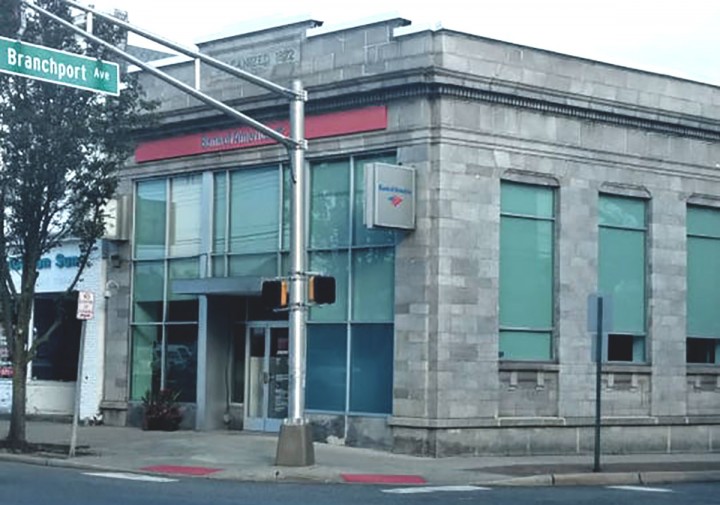 Bank of America on the corner of Broadway and Branchport Ave. now belongs to the city.

“It’s also crucial to all of us that we preserve our single-family neighborhoods. Our goal is to make the city a safe place to live, improve the quality of life and maintain a city that is affordable,” said Pallone. One of his highlights was that since he has been in office he has not increased the tax rate and recently the council adopted a citywide tax abatement program for residents that will benefit all working families.

Pallone started off saying they want to continue to improve the oceanfront but to put more emphasis on the rest of the city. “That would include improvements to the commercial district on Broadway as well as adjoining areas. These improvements will also prioritize historic preservation, our environment, the arts, parks, recreation and citywide landscaping,” said Pallone.

Before he started going over the next 10-years, he wanted to highlight what he and his team have accomplished during the past two years as it has to do with the master plan. Next month the city will be closing on the historic Bank of America that is located at the intersection of Broadway and Branchport Avenue, which was donated to Long Branch and will be transformed into a community arts center and a new office for the department of economic and community development.

“We’ll soon be starting construction on a new community pool to be built without any cost to the taxpayers of Long Branch. And we just received the largest transit village grant of any municipality in the state,” Pallone said. The grant money will be used to make significant improvements to the Third Avenue corridor. Another project about to start is the much needed improvements to the railroad station.

Speaking about parks, Pallone stated that a new dock. Boat launch and bulkhead replacement project has just been completed at Branchport Park. A large open space grant was obtained for Jackson Woods. “We created a new park and flower display on Liberty Street, landscaped city hall, Slocum Park, and other areas throughout the city,” said Pallone. He added that the new carousel opened in Pier Village last summer and much of the oceanfront development will be completed by the end of fall. “Finally we applied for a grant for a large library extension and community resource center.” If they are awarded the money the library will have a state of the art business center, health and wellness center and a large auditorium.

Nicholas Graviano, planning director for the city, said that the last master plan was adopted in 2010 and must be reviewed every ten years. He stated that purpose was to examine the policies and objectives of the last plan and determine if there have been any changes in the policies and objectives since 2010. “It also has the ability to form new recommendations on development regulations and policy,” said Graviano. He also stated that Long Branch is not the same as it was ten years ago, with Superstorm Sandy, the fading of brick and mortar retail sector. We have seen a rise in the transportation network companies such as Uber and Lift, so were living in quite a different world than we did in 2010.”

In regards to the city population, Graviano said that Long Branch is about the same in 2020 as it was in 2010. With respect to building permits and development, he stated that the city has seen roughly 1,500 new houses starts, 25-percent single family and 75-pecent into two-plus family developments.

For 2020, Graviano said that the first goal of the plan is to revitalize city areas around waterfront areas. Second he said the city seeks to improve the gateway areas; Broadway, Joline Avenue, Branchport Avenue, Ocean Avenue and both of the city’s train stations. “Were looking to seek landscaping on public and private properties. Were also looking to amend the existing redevelopment plan with commercial land use standards that fit the current economy.  Regard to housing, they want to increase affordable housing and protect the quality of life in all neighborhoods.

Laura Neuman, city engineer, stated that Long Branch would be looking to create pedestrian and bike path networks throughout the city. Graviano stated that it a major component of the 2020 master plan.

During the question and answer portion of the meeting, many asked about green initiatives to which Graviano stated the city would support them. He also said that the planning board has been requiring new projects with electrical charging stations within their parking areas and this is something they will formalize in the master plan.

Pallone added that the city has had several workshop meetings with an EV company called Green Spot about locating charging stations throughout the city. Currently the city administrator and attorney are working with the company. “Hopefully that will be up and running by the end of the calendar year,” Pallone said.

During the question period, one caller who was not identified asked if the city is taking into account infrastructure plans for local roadways to accommodate all the development. “The city is always aware of the traffic concerns of its residents. From a positive standpoint traffic is definitely a signal of vitality and desire to be in the city. It’s an unwanted consequence of being a popular place to visit and live. The city is constantly exploring funding sources to examine and study parking and traffic patterns that are generated during summer peak periods as well as seeking to promote the usage of public transportation and transportation network companies for visitors to come to the city and get around once they are here,” said Graviano.

One caller asked where they can view the master plan and will they wait until people can get together in public for this to be approved. “This is step one, we hope to have another meeting where we can get the public involved and get your input,” said Pallone.

Graviano stated that this is the beginning of the process where they will submit a report to the planning board, who will then conduct an official public hearing. “What we are doing here is not required by law, we are going above and beyond to seek the communities input in regard to the preparation of the document,” Graviano said.

Vincent LaPore called in and stated that the Long Branch redevelopment was all started to pay down a $23 million debt. “Ask any resident in this city if they saw tax relief with our current oceanfront redevelopment. They haven’t,” said LaPore. He also stated that it is imperative that high density particularly on the oceanfront no longer occurs. “Particularly high density throughout this city with counterproductive tax abatements.”

LaPore stated that the overdevelopment of the oceanfront must be halted. He wants the new master plan to say if a beach club is sold along the Elebron section of the city it can’t be used for housing, and that it should be for recreational or open space. He added that the city is maxing out with sewage, traffic, parking and that high density is not the cities future.

One caller wanted to know if  pier and speed ferry were going to be part of the master plan. Unfortunately, according to Graviano it requires funding sources way beyond that of the city. “I don’t see it happening anytime soon,” said Graviano.

Pallone stated that the pier project that was envisioned is well over $100 million and the federal money is just not there. “The cost of that project is just highly unlikely,” Pallone said.

He said if you have questions just email the city at masterplan@longbranch.org