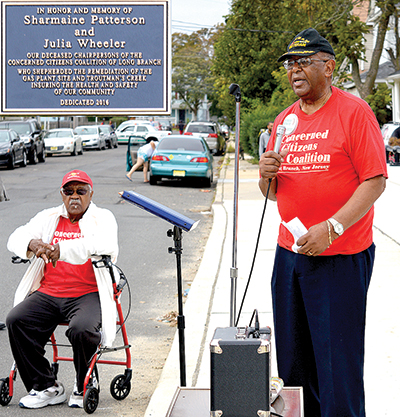 Avery Grant, Executive Director of the Coalition, with Joe Turpin, who also played a big part in the Coalition.

By Patty Booth O’Neill
Long Branch — It was a bright day for Long Branch Saturday morning as citizens gathered for a dedication of a plaque erected in honor of Long Branch activists Sharmaine Patterson and Julia Wheeler, at the site of the  Seaview Ave. Bridge.

Making introductions was Avery Grant, Executive Director of the Coalition, who organized the push to get the plaque made. “This is just a symbol of what those two ladies did,” he said. “It just goes to show you what ordinary citizens can do to help their fellow citizens.” Alongside him was Joe Turpin, who was also a big part of the Coalition and getting things done.

Mayor Adam Schneider along with members of the City Counsel, and Bill Dangler, President of the NAACP and member of Long Branch Board of Ed were present at the unveiling.

It was a long time coming for Patterson and Wheeler, since 2002 if you want to get down to it, when The Concerned Citizens Coalition of Long Branch was formed after over 30-40 people in housing, churches, and community facilities surrounding the area started to become ill. That was just the beginning and many more would follow.

Wheeler and Patterson were co-chairmen of the volunteer organization that brought attention to the old gas plant, and the pollution it had left, to a national level.

The area adjacent to the bridge was the site of the old gas plant, which stopped operations in the 1960s, but left behind extremely contaminated land. New Jersey Natural Gas Company bought the site, and eventually cleaned it up, but the river and surrounding land were still contaminated and making people sick.

“The NJNGC did not have anything to do with this contamination. They are the most community minded group,” Grant said.

The Concerned Citizens Coalition brought these problems to the public eye, and when the late Vivian Martin heard about the contamination she took a poll on how many people were getting ill — and came up with almost 300.

The publicity allowed The Concerned Citizens Coalition to participate in decision making for the clean up of the overall areas.

Through many meetings and with help from then-Governor Jim McGreevy, cleanup was extended to off-site properties and damages to natural resources and the creek were restored.
People who had become ill filed a law suit and as a result 292 people received checks ranging from $20,000 up to $200,000.

Grant gave credit to Congressman Frank Pallone was also instrumental in getting the federal and state agencies involved.

“Today we are putting up a plaque at the intersection of politics and family,” Mayor Adam Schneider began as he addressed the crowd. He spoke about how he met Julia 35 years ago, and how he got to know her family. “I never knew Sharmaine, but after she passed I realized I knew some of her family members.”

His political comment was “Vote! It’s part of what we are talking about today. You exercise your power. Vote… Because those two women fought for that right and encouraged everybody here in this community to exercise that right, so please do so.”

He also the told family members he was glad to be a part of the dedication of the plaque.

“We look forward to working with the members of the community in the spirit of Julia and Sharmaine,” Schneider said.

Sharmaine’s friend, Pastor Caroline Bennett spoke about her and how she had a sense of humor in everything she did.

Other pastors, Rev. Richard Worsley and Rev. Joseph Calhoun, also spoke about the women, their hard work and dedication.

Towards the end of the event Grant had the crowd clap for the two women who could not be present. “Let’s give them a hand,” he urged. “They allow people like us to be in on the decision making.”

The plaque is finally unveiled.

Avery Grant, Executive Director of the Coalition, with Joe Turpin, who also played a big part in the Coalition.

Councilwoman Mary Jane Celli and Annie Grant enjoy the plaque dedication and stories told by friends and family of Sharmaine and Julia.

Kent Thornton listens on as his mother, Brenda Bursay, talks about her mother, Sharmaine Patterson.

Avery then reminisced about old times. “It used to be we only had to make one call and we’d have  200 to 300 people out here to solve our problems,” Grant told the crowd. “We have to go back to that day. But I do have to say this is just a great day in Long Branch.”