Mad Love by Marisa Smith, now at NJ Rep, is an old fashioned romantic comedy brought up to the 21st century, a sweet, heartwarming audience pleaser touched with a modern attitude. 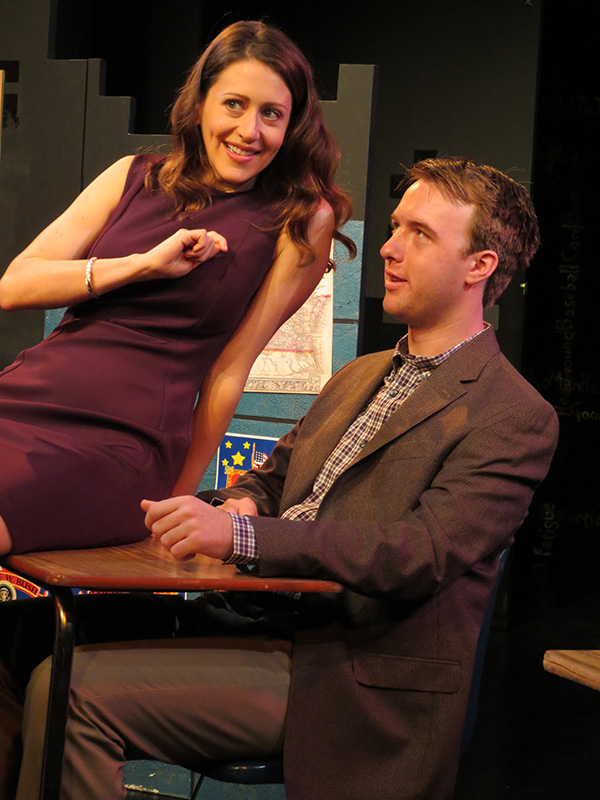 As soon as we meet the extremely attractive main couple, Sloane (Alex Trow) and Brandon (Graham Techler), it is clear that these two crazy kids are made for each other, even though she is a rich girl employed by her father and he is a struggling Middle School history teacher.

They are similar to a young Hepburn and Tracy whose relationship is like a Taylor Swift song. They break up, they quarrel over who initiated the breakup, they flirt, they make up, and they repeat.

As the play opens, their main quarrel is as to whether Brandon will act as Sloane’s sperm donor (suitably compensated). She never wants to marry, and hates babies, but would like one of her own during her years of peak fertility, and in time to get her body back in shape for bikini season. He doesn’t want a stranger coming to him years later saying, “I have long fingers and strange eyebrows. I must be yours!”

Brandon shares a shabby bachelor pad with his older brother Doug (Jared Michael Delaney), who suffered a traumatic brain injury jumping out of a window to impress his Cornell fraternity brothers, and earns very little money stocking a fruit stand. Doug calls Brandon “Buffer.” That is probably a childhood nickname, but Brandon acts as a buffer between his sweet, naive brother and the world, concealing as long as possible that the insurance money for their mother’s nursing home is running out.

Looking at their home, dominated by a huge recycling tub (the center of a running joke as to whether it should be in the kitchen or the living room) and a tiny refrigerator filled only with beer, we can see Brandon and Doug have little disposable income. Their only options are to take Sloane up on her proposal, or to find out if one of their baseball cards is insanely valuable.

Sloane drops by the apartment, where she and Doug bond over his pet lizard, Pogo. Sloane is posing as “Liz Novak,” and Doug tells her about his brother’s many girlfriends. Her furious reaction is priceless. Another visitor is the voluptuous Ukrainian escort, Katarina (Brittany Proia), who may or may not have a heart of gold, but certainly has an eye for Prada. Doug quickly falls for her physical charms and homemade soup.

The set (Jessica Parks) is superlatively clever. What appear to be plain black panels covered with words relevant to the plot can be moved many ways to reveal hidden locations. The manpower to move them is supplied by Delaney, perhaps because Doug is the only character who wears sweat pants.

I have nothing but praise for the writing, acting and direction, except for a tiny quibble. Although Brandon can use the word “peninsula” in conversation, he is stumped by “tumescence.”

What is the relevance of tumescence? That is the name clever Sloane has chose for a perfume which her father’s company is marketing for a big celebrity. I can’t tell you which celebrity, but her signature song is “Like a Virgin.”