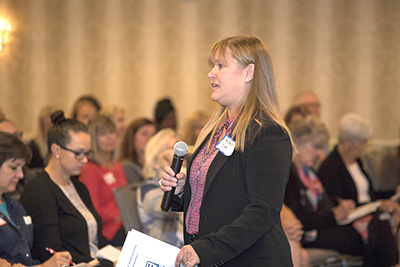 According to Michelle Scott, Ph.D., associate professor and director of the SRF project, the forum was inspired by the attention that followed the release of the Netflix series “13 Reasons Why” earlier this year. She noted that she watched the national conversation on suicide shift following the release of the series from “something that needed to be talked about to something that was being talked about.”

However, she felt that a critical issue to be addressed with youth — how to start a conversation about suicide — remained outstanding. She hoped this forum would suggest ways to begin and expand that conversation in potentially life-saving ways.

In his remarks on beginning the conversation on a national level, Victor Schwartz, M.D., medical director of the Jed Foundation and co-creator of the talking points surrounding “13 Reasons Why,” said that the latest information released from the Centers for Disease Control and the Substance Abuse and Mental Health Services Administration show that for the period 2007 to 2015, rates of suicide deaths have gone up by almost 50 percent.

Schwartz theorized that the proliferation of social media during this same timeframe may have some causal effect, though he did note that a lot is not yet known about “the impact of being on social media as much as young people are today on their development and growth.”

While the effects of spending excessive amounts of time in “a virtual world one step removed from a face-to-face interaction” has not yet been studied sufficiently to determine if it is harmful, Schwartz said that a young person’s ability to access extraordinary amounts of unfiltered information could be a problem under certain circumstances.

“Sometimes a small impediment can make a tremendous difference,” he said. “Where you used to have to go to a library, now you can access that [information] yourself.”

Adolescents and young adults are consuming more information and viewing more programming online than older adults, he said, noting that these groups are also the ones most at risk of negative consequences, such as suicide contagion.

Schwartz said that the alarm was raised in the suicide prevention community after the release of “13 Reasons Why” because of the “particular nature of the platform and the quality of the shows.”

Other artistic portrayals of suicide — such as Shakespeare’s “Romeo and Juliet” or the current Broadway musical “Dear Evan Hansen,” which both deal with self-inflicted deaths — have not had the global impact in the same ways as “this very affecting soap opera of a show,” he said. “This is partly because the kids were really appealing and the story was really compelling.”

Maureen Underwood, LCSW, a nationally recognized expert on youth suicide prevention, provided several key ways to use what is being presented in the media as a way to begin personal conversations. She pointed out that children are learning and talking about suicide at younger ages — including, she said, elementary age populations — which she sees as an impetus for learning how to have more “safe” conversations about suicide.

Noting that there does seem to be a generational difference in acceptability of conversational topics, Underwood noted that “students are more open today to talk about things that [older adults] would never have thought about.” She also encouraged those in attendance to watch the television shows, see the movies, listen to the music and, in general, consume at least some of the media that younger people are talking about and interacting with as a way to begin a conversation.

Underwood noted that most young people who watch potentially disconcerting shows, such as “13 Reasons Why” or who listen to music with disturbing lyrics are not suicidal, there is a small percentage who are, “so we are here to give you a bit of guidance in talking to kids.”

“The goal is to get kids to open up and tell you how they feel and not for you to give a lecture,” she said, emphatically.

“The three most important words in any conversation about suicide are ‘tell me more,’” she continued. “It is the best way to get more information.”

“And if the answer [the young person] gives makes you worried, you need to consult a mental health professional, your pediatrician or a hotline for more information.”

Robin S. Mama, Ph.D., LSW, dean of the School of Social Work, said that conferences such as this forum are important to the school. “We have community members who work in this area who need to have updated information; we have students who have internships that need this information and it’s an important issue — a social issue — that we cannot ignore as a school or as a community.”

After the conference was moved to an off-campus location due to overwhelming interest, Mama called the attendance “phenomenal.” She said that it showed that even more work needs to be done by the SRF project in this area to meet the demand.

For more information on the work of the SRF Suicide Prevention and Training Project or to make a donation to the project, visit www.monmouth.edu/SRF or contact Michelle Scott at mscott@monmouth.edu.

If someone you know exhibits the warning signs of suicide, call the U.S. National Suicide Prevention Lifeline at 800-273-TALK (8255).

On Dec. 8, 2017 the Lords of 52nd Street, legends of the Billy Joel band, will present a concert to benefit the SRF Project at 7:30 p.m. in Pollak Theatre on the Monmouth University campus. For tickets, please call 732-263-6889 or visit www.monmouth.edu/mca.