Editor’s Note: This article contains references to parts of the male anatomy some may find offensive. In our next issue there are reports of worse “pranks”.

Oceanport — Saturday afternoon was a normal day for Joe Irace as he and his family were preparing for Easter Sunday. The mood quickly changed after a package arrived. 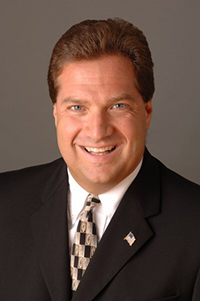 “My daughter answered the door and a package was delivered addressed to me. I didn’t remember ordering anything so I told her to open it,” said Irace. When his daughter opened the package, the entire family was shocked by its contents. “The first thing we noticed was someone singing, ‘you’re a dick, you’re a dick.’ We couldn’t get it to stop.”

Also inside the package were candies shaped like a penis. On that package, it read, “Eat a bag of Dicks!” There was no information on who shipped these tiny little members to Irace. “I was upset that someone felt it was okay to send this to my home,” said Irace.

In 2007, Irace was elected to the Borough Council and has been serving on it ever since.

“In my 12 years on council we have had some contentious times, arguments and disagreements. However, we all knew that each of us love Oceanport and were trying to do the best we could for the borough, and we really didn’t carry those differences into our relationships,” added Irace.

The last few years however, Irace has seen a change in how people treat elected officials they disagree with.

“Maybe it has to do with social media where people can hide their identity and say vicious outrageous things and never face the consequences. I understand people are passionate in their positions, heck so am I am. But, you have to reach a point where you can agree to disagree with someone and move on,” Irace said.

Oceanport, which has an election coming and a primary in June, has several people on the ticket. Irace is running for another term. He said the two biggest issues recently in the borough are taxes and the development of Fort Monmouth.

“Mayor Jay Coffey is [advocating for] close to a six percent tax increase while the council is at two percent. Concerning Fort Monmouth, we do not want big college campuses, or towering housing units. Oceanport has not had enough input into what we would like to see developed on our section of the base property.”

There have been other issues that caused some at public meetings to sound off. According to Irace, the biggest non-issue in the borough was change of the Environmental Commission to an Environmental Committee. In the end, the council worked out everything with those members and it was being blowing out of context.

As an elected council member in Oceanport, Irace receives $1,500 annually. Considering the amount of time that is required, those officials are volunteers.

“In all my time on council I have never received an anonymous letter or package. Of course, I have had people stop over and state their views one way or the other, but as I said we are all here for the betterment of Oceanport,” said Irace.

Irace called the Oceanport Police Department to report the package sent to him. “Unfortunately, I don’t know how far they will get as the company that sells it promises it will be anonymous,” added Irace.

If police are able to expose the tiny edible penis shipper, Irace just wants them to be accountable for their actions.

“I was told that this is not just a prank, it is actually harassment of a public official. What upset me the most was that it was sent to my home, where my family lives. My wife and daughters did not run for elected office, I did. They should not have to be exposed to this,” Irace said.

According to the company website, which markets these items as “pranks,” what Irace received was “The Evil Singing Bag of Dicks.” It sold for $31.69. What makes this selection so “devious” is the annoying and obnoxious jingle never stops playing. 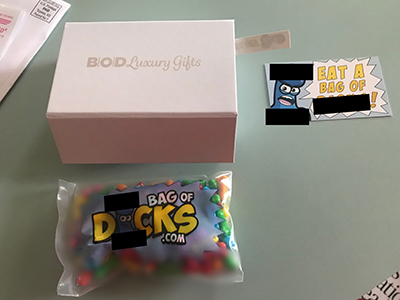