Kushner Co.: A vision for city, not just Pier Village­

Long Branch — It was a well attended meeting of local businesses on Wednesday morning at Brookdale Community College on Broadway. Probably one of the best attended over the years, perhaps due to the guest speakers. 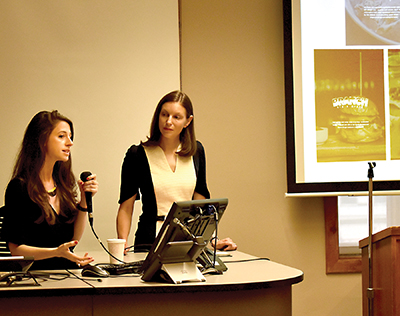 Karen Zabarsky and Nichole Kushner of Kushner Companies put on a presentation discussing what the company wants to see in Pier Village and around the city.­

Nichole Kushner and Karen Zabarsky of Kushner Companies were guest speakers talking about their status and purpose of investments in Long Branch like Pier Village Phase III and other ongoing projects.

“We are here today to give an update on what’s going on in Long Branch and what we’ve been up to,” Kushner opened. “We’d like to talk about things we’re working on in the future.”

“I think we’ve just seen the magic that happens when we are more integrated and working together with so many members of the community,” said Zabarsky, Creative Director for Kushner Companies.

She spoke about new shops coming into Pier Village and some that are already there. Coming soon inside the Wave Hotel are smaller grab-and-go eateries such as Branch Burger (named after Long Branch) and Orilla’s Tacos.

Kushner said that businesses were chosen to include everyone from any demographic. “We try to be very thoughtful about creating that experience,” Kushner said.

They added that they look forward to working with everyone and brainstorming on how they can work together.

The meeting was open for discussion and questions, a major one being asked by Todd Katz.

“I think there are a lot of questions about the downtown area. We understand that you guys believe in the town so much that you want to invest in downtown,” Katz said. “Can you touch briefly with what you can share and the timing of your plans with downtown?”

Several months ago, Kushner Cos. reported it was planning to buy the downtown Broadway redevelopment project from Long Branch Partners, current developers. But in the meantime, Long Branch Partners had been proceeding with the paperwork to transform the area between Second Avenue and Liberty Street. But there had been rumors going around that Kushner Co. has indeed taken over the downtown project.

“We are excited about the potential of Long Branch,” Kushner said. “We really believe in this area, we know this area as a local (Kushner grew up in Long Branch), so we see the growth.”

Sources have told The Link that the property transfer to Kushner Cos. is effectively a “done deal” but that it hasn’t legally taken place yet so they can’t officially confirm it.

Kushner spoke about how having the train in Long Branch as a gem to the area.

“So if you’re by transportation everything is possible. Pier Village is just the beginning but I think given the partnership we have with this town, and given the opportunity, we believe in it so much that we can expand that all the way down to Broadway.

Next week The Link will write about other topics covered at the meeting.