Long Branch — A year ago it was just an idea that began as a result of a comment made at a beach bash hosted by MOCEANS, an organization that works to help those with disabilities lead independent lives. Last year, they got special sand mats to hold handicap accessible a party on the beach. 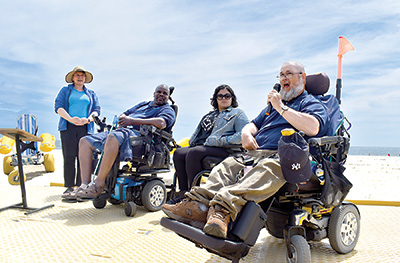 Over 100 had attended the party in Long Branch and one person who uses a wheelchair was overheard saying, “This is the first time I’ve ever been on the beach.”

That comment opened up the eyes, hearts and pockets of those at the event, who, up to that time, had taken accessability of the beach for granted.

And the wheels started turning.

On Saturday, the city held a ribbon cutting for the first fully accessible beach on the Jersey shore.

“I’m proud that the City of Long Branch is one of the first to provide a fully accessible beach,” said Mayor John Pallone. “And we hope it doesn’t end here. This is just the beginning of what we want to offer our residents.”

MOCEANS Executive Director Judyth Brown was grateful for the accomplishment.

“All we did last year was have a beach party and look what came out of it. It was a moment that said yes to a lot of hopes and dreams,”she said to the crowd.

The hard work to bring Saturday’s auspicious event to fruition began a year ago. One phone call was made to Ed and Mimi Feliciano, owners of South Beach Condominiums across the street from the ramp. Without hesitation they donated the money to fund the project built at North Bath Beach.

“We came (to Long Branch) to be good neighbors,” said Ed Feliciano. “The truth of the matter is everybody should have this along the ocean. “

“We’re making a difference and the people of Long Branch deserve it,” Mimi said.

The Felicianos proudly attended the ribbon cutting along with local dignitaries Senator Vin Gopal, Congressman Frank Pallone, Assemblyman Eric Houghtaling, Freeholder Tom Arnone and Long Mayor and Council. There were also excited members of MOCEANS in attendance along with their friends and supporters.

“I’ve been ready to go to the beach for 35 years, said Stan Soden of MOCEANS, also known as the “unofficial mayor of Long Branch.”

“This is a wonderful thing. They don’t realize how they’ve opened up the world for us.”

Senator Gopal was adamant that the project would be a model for all the towns across the state and country. “What the city has accomplished today is really remarkable.”

With the Felicianos generous donation, Public Works Director Stan Dziuba and department employees got to work. They built the handicap-accessible zig zag ramp connecting the boardwalk to a 120 foot walkway that connects to 60×40 foot area for beach-goers in wheelchairs or walkers. There are picnic tables and sand/ocean wheelchairs to enjoy for the day.

Wali Mohammed, an employee at MOCEANS was impressed and excited by the accomplishment.

“We are going to use Long Branch as our pilot program for what the state of New Jersey can do for beach accessibility for everybody,” said Assemblyman Houghtaling as he presented the City of Long Branch and MOCEANS with a proclamation on behalf of Gopal, Houghtaling and Assemblywoman Joann Downey for their accomplishments.

“This is a great day for Monmouth County and Long Branch. This is going to be a model for other towns,” Arnone said.

“Take a look around you,” said Brown. “This is community at work. This is every level of government, private money and foundation money, but most of all passion and inspiration that comes from grass roots.”

“This day means so much. I’ve lived in this town for 35 years and I’ve alway said this is one of the most user-friendly town for people with disabilities. The people of this town are always there without being asked,” Soden said. “I can’t thank you enough.”

Firefighter Tim Phillips announced that FMBA Local 68 will be donating a fully accessible handicap playground that will be erected adjacent to the present area. That project will begin in a few weeks.

Brown spoke about other needs that have to be fulfilled including housing and transportation. 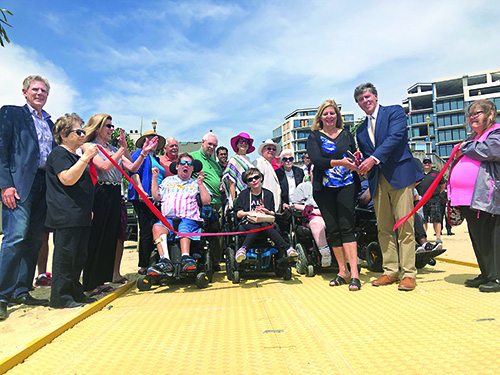 It was a proud day Saturday as the ribbon is cut to Long Branch’s first fully accessible beach. By Sunday the area was already being utilized.