Theater Review: Memoirs of a Forgotten Man an unforgettable experience

Long Branch — Memoirs of a Forgotten Man, by D.W. Gregory, is rich in character and incident and subject. The theme is memory, and the central character is Alexei, touchingly played by Benjamin Satchel. Alexei has both total recall and synesthesia.

He remembers everything that ever happened to him, and his experiences and recollections are enhanced with mixed senses, seeing and tasting sounds, hearing and smelling colors. His differences make him insensitive to ordinary cues. Alexei can tell when someone is lying, because that person’s words look like washed-out chalk, but he cannot recognize that no one likes being called a liar. 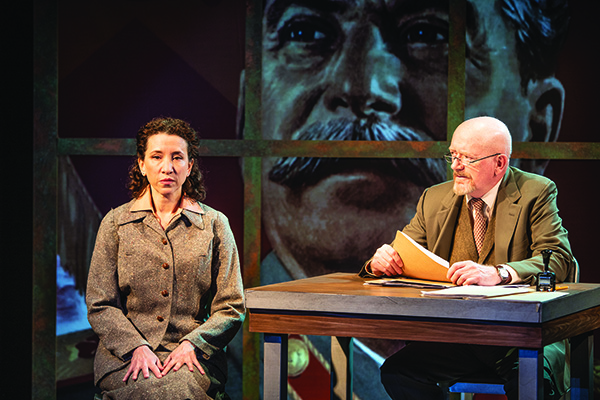 To remember everything can be dangerous, as we learn from Memoirs of a Forgotten Man, while simultaneously experiencing extraordinary theater and seeing what can happen when a government has absolute power over what is fake news and what is reality, and can alter that truth daily.

In 1957 Moscow, psychologist Natalya (Amie Bermowitz) is seeking permission from bureaucrat Kreplev (Steve Brady) to publish her paper on “Mr. S.”, a remarkable patient who could memorize hundreds of items instantly and perfectly. She is pale and submissive, the actress’s beauty hidden behind dowdy hair and clothes. He is simultaneously officious and sinister, recalling the colorless men who wielded immense power in the recent movie The Death of Stalin. Kreplev wants the present location of “Mr. S.” for reasons that unfold during the play, and he is willing to threaten Natalia with thwarting her career or even with blackmail to get the information.

As Kreplev presses Natalya for details, the play shifts back to 1937 and young Alexei’s life in Leningrad. Steve Brady steps into the scene and the past to become older brother Vassily. The family is completed by Andrea Gallo as their sweet, innocent mother. She also plays a stern teacher and a splenetic male newspaper editor (my secret favorite, because mother Andrea is heartbreaking but editor Andrea is hilarious).

The action moves magically and smoothly between 1937 and 1957, the eras meeting as 1937 Natalia speaks across the decades to 1957 Kreplev. In the earlier time, the Stalinist purges are going on, its victims wiped from history (as fictionalized in George Orwell’s 1984 and recorded in David King’s The Commissar Vanishes: the Falsification of Photography and Art in Stalin’s Russia). Alexei begins working for the state newspaper, and fails to understand why Comrade Bukharin’s name has to be removed from print or Bukharin’s picture from official photos, although Alexei can picture Bukharin and recall his speeches verbatim.

When neighbor Madame Demidova (Amie Bermowitz again) visits with currants and a lemon scavenged from the apartment of a mysteriously vanished couple, it’s clear anyone can be in danger of vanishing after a two a.m. knock at the door.

Kreplev offers to bury evidence of Natalya’s past missteps. He says the past can be erased and many in the post Stalinist era have left their old lives behind to become someone else. Young Alexei asks Natalya to teach him to how to forget. But can memories be excised without loss and pain to ourselves and others? Can traumas be eradicated along with painful memories? Is forgetting the horrors of history a luxury we can afford? I think we need art like Memoirs of a Forgotten Man to help us to remember.