Township of Ocean – The June 25, virtual meeting of the mayor and council was moving along rather quickly, until it was opened for public comment. 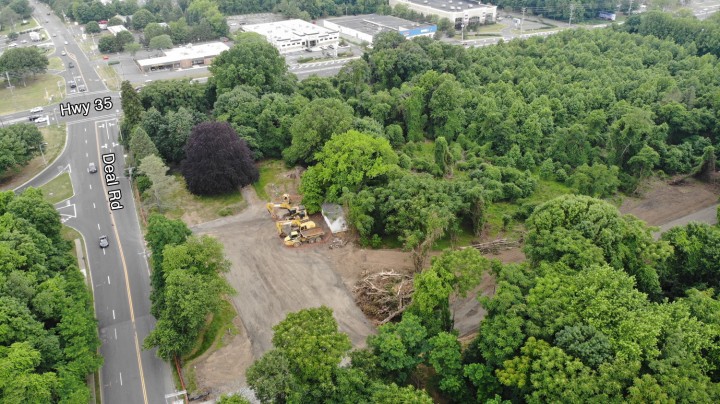 Aerial shot of 32 acres on the corner of Hwy 35 and Deal Rd.

Jacquelyn Wenzel, who made an unsuccessful run for township council in 2019 has been an outspoken critic of Mayor Christopher P. Siciliano and his governing body over the development of property known as 32 acres. During the question session of the meeting each member of the public is allotted five minutes to speak. Wenzel battled and argued with Siciliano and Martin J. Arbus, township attorney.

Wenzel, who stated she is the spokesperson for a private group of community members known as Save 32 Acres, stated that the current plans for the massive commercial and residential property at the intersection of state Highway 35 and Deal Road has not been given the final approval from the Department of Transportation. She had two facts  she was trying to stress to the council.

The project will have an “urban jughandle” and according to Wenzel, the traffic coming out
of the development will not be allowed to make a left on Deal Road to head eastward toward the Ocean. Instead those cars will have to travel down Logan Road to Sunset in order to go to the beach. Siciliano allowed Wenzel to talk and then attempted to explain that there will be a controlled signal at that intersection.

“Have any of you read the DOT report?” asked Wenzel. She added that it says nothing about the controlled intersection.

“I’m not concerned. Department of Transportation are professionals. I will read the final report when it comes out,” Siciliano said. He also added that the developer would do whatever is required as he has spent lots of time and money to get the project going.

“DOT says you can’t make a left onto Deal Road when you exit at Deal and Logan. Nobody is representing us, not even the planning board. People are coming to me for answers and I represent them,” said Wenzel.

“The planning board made its decision. I’m not sure what they approved,” said Arbus. He added that he thought they would take a “slip” road when leaving the development to get onto Deal Road. Arbus added that Wenzel does not represent the community. “You represent a section of it.”

“Marty, you would have to bring up my election results,” Wenzel said.

Another caller, who said that she lives on Logan Road and that Wenzel does speak for those residents, asked Siciliano how come he is so terse with Wenzel.

“Jackie spins a false narrative which has a salacious ending. I have tried to stop it (development) as hard as I could,” said Siciliano. When the plan first appeared in front of Siciliano five years ago was much denser. “According to her spin, we should all be in jail.”

The second issue that Wenzel had was that the developer was cutting down trees without all his approvals.

“Jackie we crushed this guy for five years. It cost him a lot of money over that time. If you don’t get your way we’re bullies,” said Siciliano. The developer also had to post a tree restoration guarantee. “So if he loses and does not get his permits, he will have to plant new trees.”

Another woman who called in (we are withholding her name) said she was the victim of a sexual assault. Michael Muscillo, Township Manager, attempted to cut her off and offered to meet with her. The caller stated that she has an order of protection, but the police department says it can’t enforce it because it infringes on his civil rights. “I feel very unsafe,” said the caller.

Arbus asked for a copy of the order and he stated that he along with Muscillo will talk with Police Chief Steven Peters.

Jim Bay had called in and was asking questions about resolution 20-105, which ratifies the collective bargaining agreement with the Superior Officers Association of the Township of Ocean Police Department. He wanted clarification on the length and terms.

A+ Pools for new and maintenance!

Muscillo stated that it is a three-year deal from January 1, 2020 to December 31, 2023. It gives them a 2.5% increase, along with supervisor compensation. Muscillo also stated that these officers work an 8-hour day as compared 12-hours worked by the PBA.

Bay also requested that the township post the contracts on its website, as the last one listed was from 2017.

Bimbler Blvd. resident Brian Mullins asked for help from the governing body as his street is being used by oversized vehicles and those looking for a shortcut to the Asbury circle. “Over the past four years the wires have been pulled down six times, the most recent was last night,” said Mullins. He spoke about the speeding vehicles, many with out of state plates as their navigation systems take them that way as the fastest route. He had a few suggestions that the mayor and council liked and will sit down with the chief to discuss a way to help make it a safe street.