The road from Seven Presidents Park to the Church of the Presidents is widely used by both Long Branch residents and visitors to the city. 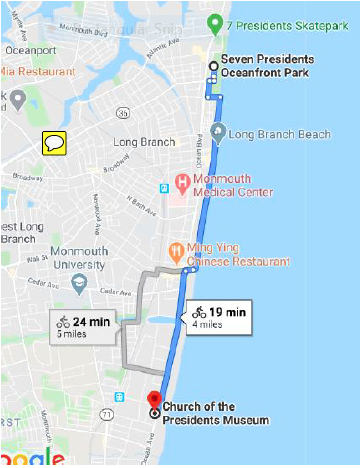 It is a popular place to bike and walk with historical sites along the way and is referred to as the ‘Seven Presidents Historic Trail’. This route also includes the city/county beaches and Pier Village Town Center. It is heavily trafficked with vehicles, especially during the summer months and has increasingly become less comfortable for pedestrians and bikers alike.

In order to identify opportunities for improvement, the Long Branch Green Team commissioned a sub-team to conduct a bike and pedestrian audit. Training on how to conduct the audit was provided by EZ Ride and the audit was conducted by the Green Team. Feedback from a variety of Long Branch City personnel and other community stakeholders was incorporated into the final report

Back to Business with Long Branch Free Public Library

Summary of Opportunities and Constraints:

1. The most significant area of concern is for bikers traveling on Ocean Avenue between South Bath Ave and Madison Ave. North and south of this section, bike lanes do exist on Ocean Avenue, but there is nothing in place to connect them through the busiest section of Ocean Ave. Instead, there is very limited room for biking with cars parked along the road and heavy traffic, especially during beach season, travelling both north and south. The sidewalks are also very crowded and there are no designated bike lanes despite a number of cyclists who use this road. The adjacent street, Ocean Boulevard, which runs parallel to Ocean Ave, does not offer a safer alternative.

2. Two additional areas of concern are the Brighton Ave and West End Court intersections. These are heavily trafficked with cars making turns into the West End Business District and/or dropping off beach goers at the designated drop-off points located in this area making it dangerous for pedestrians and bicyclists alike. Cyclists, in particular, get squeezed by right turn lanes that leave them with nowhere to proceed.

3. While not as significant a safety concern due to the relatively wide street, there is an opportunity to take advantage of the large grass shoulder on the stretch of Ocean Ave that borders the west side of Seven Presidents Park. While the street does not have a bike lane, there is room to cut a bike/pedestrian path into the grass shoulder without infringing upon the street. Alternatively, opening up a path through the park parallel to Ocean Ave would also work well.