Andrew Koch, 73, of Long Branch, died at Monmouth Medical Center in Long Branch NJ on Thursday, July 9,2020. He was born in Newark, NJ and was a collection agent for many different agencies. 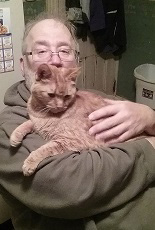 He recently retired in 2010 . He was an avid animal lover . He was always finding stray cats and taking them in. Once he even rescued a chipmunk from a stray cat and returned it to the woods. He also was a dog lover and had adopted many rescue dogs. Other interests included horse racing and Atlantic City. He was a connoisseur of cigars and was often seen with a stogie sitting in his car down by the ocean. Andy had a good sense of humor and was a great yarn spinner. He loved to tell his tale tales.

He leaves behind his wife, Patricia and his autistic son, Aaron, his aunt, Pat Koch Thayler. He is predeceased by his son Dustin; father, Harold, mother, Frances Schottenfeld Koch; Uncle former New York City Mayor Ed Koch; uncles, Milton, David and Alven Schottenfeld. No services planned at this time. In lieu of flowers, donations in his memory may be made to the SPCA, 260 Wall Street in Eatontown, NJ 07724.