Long Branch – When a rain-relocation site was required minutes before Governor Phil Murphy was slated to address the press in West End Park, much to the appreciation of the Governor, moving indoors was a seamless  transition. 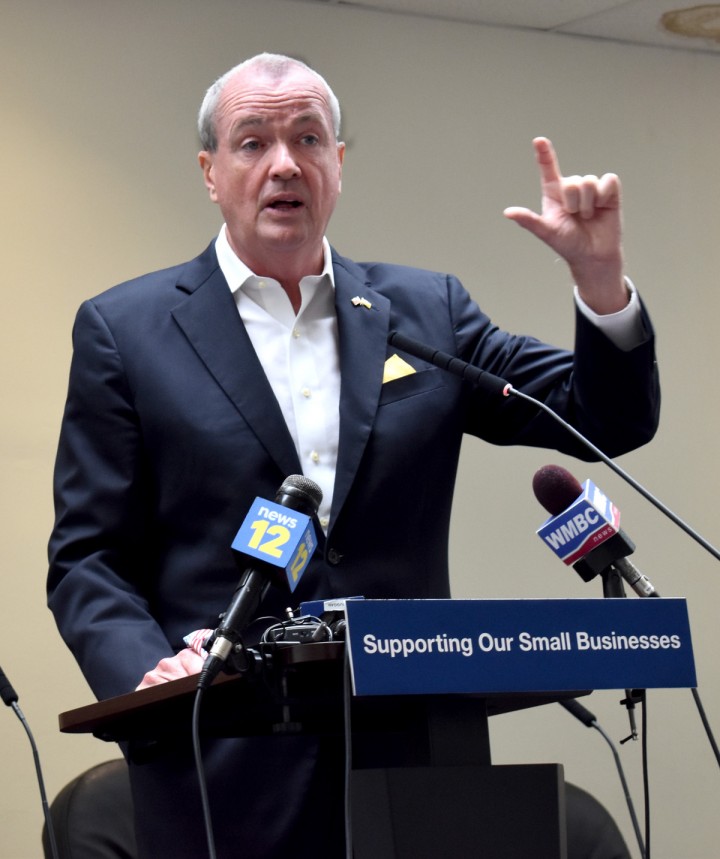 “Right up to the last minute we weren’t sure if the rain was going to be a problem or not,” said Long Branch Mayor John Pallone. “We removed chairs so they weren’t so close, moved microphones and everything went smoothly after that.”

The impending rain didn’t stop  Governor Murphy from making a pit stop at the park on Thursday afternoon to say hello to the farmers market vendors and other visitors to West End.

Later on at City Hall Mayor Pallone introduced Governor Murphy. “I’d like to thank the Governor today for going through extraordinary measures above and beyond for all the people of New Jersey,” he said.

Murphy’s main concerns were  the COVID-19 crisis, the plight of small businesses and unemployment. He spoke about taking unprecedented actions offering tens of millions of dollars in grants and loans to small business owners, helping their businesses survive.

“We are committed to helping small businesses across our state survive this unprecedented crisis,” said Governor Murphy. “A stronger and fairer New Jersey starts from the bottom up. The Small Business Lease – Emergency Assistance Grant Program will infuse much needed funding into local economies by assisting both small businesses and the landlords that they rent from.

We have many more plans on the horizon to unveil amounting to hundreds of millions of dollars in direct economic assistance to help move struggling New Jersey residents and small businesses on the path to recovery,” Murphy said before introducing Lieutenant Governor Sheila Oliver.

“Governor Murphy and I remain committed to supporting New Jersey small business communities and we will do everything in our power to help them come out of this crisis stronger,” the Lieutenant Governor said.

Senator Vin Gopal said that it was a testament to Mayor Pallone and Council that the Governor chose Long Branch for the event. He also gave a shout out to Michael Sirianni, president of the Long Branch Chamber of Commerce, for doing such a wonderful job with local businesses. Sirianni had asked that 501C organizations, that many chambers are, be considered for the Main Street Grant program.

“There are states all over the country wishing they took the steps that New Jersey took early on with COVID,” Gopal said. “It is time for small businesses to get back on their feet. What a wonderful job the Governor’s programs go towards doing so.”

President and CEO of NJRA Leslie Anderson was present to relate what her organization has to offer. “We work with the state’s most economically challenged communities. We go where most people don’t want to go,” she said speaking about how her company was involved in Long Branch beach properties pre-Pier Village.

It was a challenge, she said, to get private companies to invest in Long Branch until her organization purchased parcels of land so the developer could begin the project in what is now Pier Village. “That’s what we do and that’s who we are,” she said.

Anderson said the NJRA is offering $10,000 grants. “This is a grant. There will be no obligation for the small business to pay it back.”

The applications will be done all on line and the application process will be open on August 10 at NJRA.US. Their goal is to keep small businesses from being devastated as the pandemic ends.

Jackeline Mejias-Fuertes, Director of the Small Business Center at Brookdale Community College spoke about how her committee works on challenges by coming up with solutions and making recommendations.

“We have assisted over 1200 small businesses during the pandemic by helping them obtain approximately $2.8 million in funding,” she said.

Governor Murphy said that people ask him all the time what he would do with more federal money. “It’s an easy answer, a lot of focus would go into the small business community,” he said.

“COVID-19 has disrupted our economy behind only The Great Depression and the Civil War. We will not let COVID-19 take us down!” Murphy said.

Senator Vin Gopal at the podium