Those for and against President Donald Trump gathered on Sunday afternoon in the area of the Elberon section of Long Branch to await his arrival. 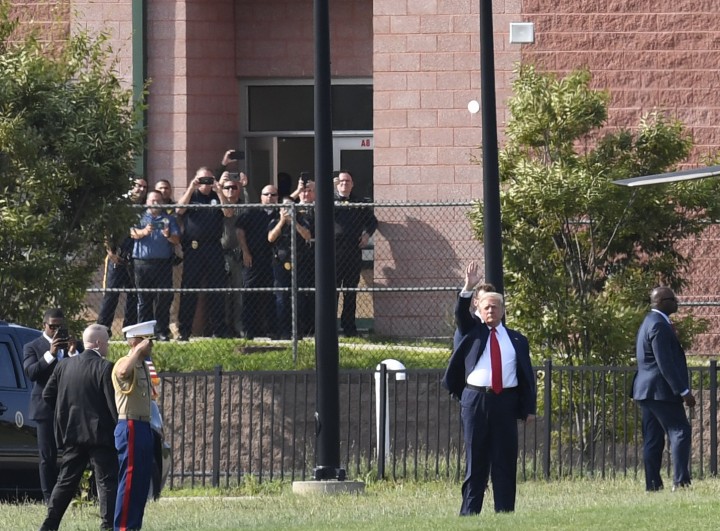 He was to attend a fundraiser in his honor that evening at the home of Stanly Chera on Ocean Ave. Chera, a friend of Trump’s, passed away earlier this year due to COVID-19. Stanly’s son Haim ran the event.

Protesters gathered in the area on the south side of the Elberon Train Station, 1/4 mile from where Trump was to land.

On one side of Lincoln Ave were about 75 anti Trump protesters, complete with hand-made signs and a Baby Trump balloon supplied by Jack Gavin from West Caldwell. They shouted out their views, their main chant being “Dump Trump.”

On the other side of the street about the same number of Trump supporters with megaphones and sound systems blared “Four More Years” and patriotic music, both sides believing the other was unpatriotic and wrong. At times their differences becoming heated, at one point each calling the other Nazis.

People in automobiles drove by honking their support, mostly pro Trump. Teens hung out of car windows, cursing and yelling, both sides flashing the finger. If the two opposing sides got near one another, it seemed as if a brawl would break out, but it never did, as police stepped in to break it up.

A lot of sweat and spit was flying, making masks necessary. Not all wore them.

Later on in the afternoon, soon before Trump was to arrive, police ordered the Baby Trump balloon to be taken down and the megaphone off, being utilized by Rafi King, leader of the pro Trump group.

All week long members of the Secret Service had been at the George L. Catrambone School securing the area, with military planes practicing landing. On Sunday the sidewalks next to the school were packed with onlookers, families set up in lawn chairs, cheering.

“Don’t bother trying to get near to the landing site,” one officer told Walter O’Neill of The Link News, as we also tried to get closer for a better view and photos. “We are moving everyone out of the area soon.”

Secret Service surrounded the school, bomb-sniffing dogs checked the area for explosive devices and snipers situated themselves on the school roof.

As people were shooed away from their spots close to Park Ave, Secret Service lined the railroad tracks. They allowed onlookers to line up along the tracks for awhile and then they were also told to leave that area. So most onlookers, including the pro and anti Trump people amassed in the north end of the train station parking lot.

Beginning from around 1:30, it seemed as fights were inevitable throughout the day… until, around 4:15 the sound of military Ospreys rumbled in the air, and then appeared as small dots in the distance. A hush came over the crowd as everyone stopped to watch as three impressive Military Ospreys drew closer, flew low overhead and touched down in the field next to the school on Park Ave. Everyone waited for the president to  follow in Marine One.

A while later Marine Two appeared in the sky and landed behind a tree and out of sight to onlookers. Then Marine One arrived, hovered close to the school ground, slowly did a one eighty and landed in plain sight.

Cheering and jeering erupted in anticipation. President Trump stepped out of the helicopter, turned to the crowd and waved. The cheering and jeering got louder with Dump Trump and Trump in 2020 signs held up. He got into his car and the motorcade drove by and they headed to Chera’s home not far away.

At the fundraiser, according to videos, Trump announced that he would have a deal with Iran four weeks after he is elected in November. He left the event at 7pm.

Surrounded by Secret Service and snipers on the roof, Trump waves as soon as he exits the helicopter.

An anti-Trump woman attempted to walk through the pro-Trump side and was immediately surrounded and badgered until police pushed them away from her.

The crowd grew quiet when the first Ospreys appeared in the sky.

Military Ospreys coming in for a landing

President Trump passed by in an armored SUV with flags on the front.

The motorcade traveled passed the crowd

President Trump’s helicopter lands in the field on Park Ave.

After sweeping the area for bombs blue tape was put up to signify that area had been checked.