The Amerigo Vespucci Society (AVS) in Long Branch recently held a backyard dedication at their society’s building. The space was dedicated in the name of their late member, Senator Tom Gagliano. 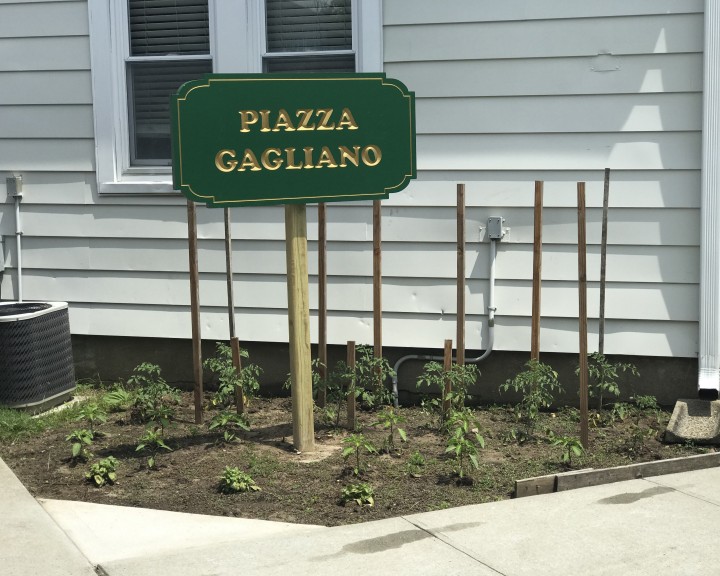 Society member Joseph Valentino stated, “my family has always had the highest respect for the Gaglaino family, and in particular the late Tom Gagliano. Therefore when we were informed of the dedication my family decided to invest in the event by donating a custom made sign renaming the backyard to ‘Piazza Gagliano’.”

The backyard had been revitalized with a series of upgrades over the past several years including improvements to the bocce ball court, newly cemented walkways, benches, fig trees, and a small vegetable garden.

The improvements were originally inspired and led by 50+ year member Tom Gagliano, whose father was a member and whose sons and grandsons are current members. Tom, a former NJ State Senator, had a passion for his Italian heritage, the AVS organization, and especially the backyard.

According to AVS President Joseph Sirianni, “Tom was respected by everyone, he was a complete gentleman who helped many throughout the years. By having the backyard dedicated in his name we keep his legacy alive for future members.”

The backyard dedication included AVS board members, The Mayor of Long Branch – John Pallone, Monmouth County Freeholder – Tom Arnone, and many members of both the Valentino family and Gagliano family.

The AVS takes its name from the famous 15th century Italian explorer and map maker. The AVS has a long history in Long Branch New Jersey dating back to its founding members in 1875. The organization was originally established as a mutual aid society where Italian men could congregate, escape from discrimination and anti-Italianism that began during the period of large-scale Italian immigration during the late 19th century.