OCEANPORT – The way Natalia Lynch had it planned out in her mind is that she would spend another year or so working as an assistant trainer before trying to go out on her own. Then owner Al Gold offered to let her train nine horses from Gold Square LLC. 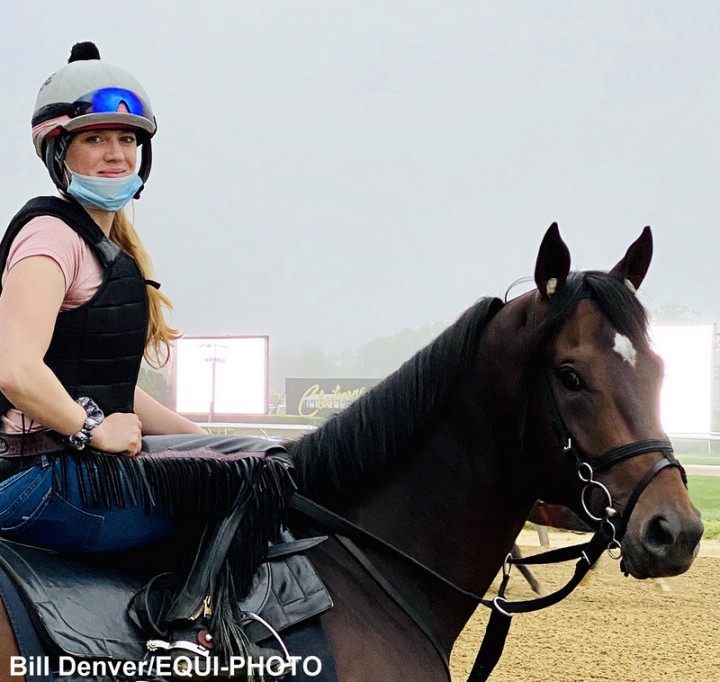 So on Aug. 25, Lynch, known by her nickname “Tally,” officially became a licensed trainer. A day later, she saddled her first starter.

And now on Saturday, with just the fourth starter in her burgeoning career, the 26-year-old Lynch will send out Wendell Fong in the $100,000 Mr. Prospector Stakes that headlines Monmouth Park’s 14-race card that day.

“It’s very surreal,” she said. “I haven’t had time to sit down and process how quickly everything has happened yet. I remember the day I got my trainer’s license I was walking out of the office and a trainer said to me `who do you work for?’ I looked down at the license and said `I guess myself now.’

“I keep telling myself that this is not any different than what I have been doing for a long time. This is something I have been working for. When Al Gold gave me this opportunity I couldn’t turn it down. So my one-year process before going out on my own turned into a two-week plan.”

Lynch, who will be based at Belmont Park, currently has 10 horses overall, eight from Gold Square (one was claimed). The Bethesda, Md. native was enrolled in the nursing school at Towson University when she started galloping horses, originally with the intent of becoming a jockey.

“I ended up not going back to school,” she said. “I started riding and worked my way up. I rode in a few amateur races last year. But my ultimate goal was to be a trainer.”

After becoming an assistant to Brittany Russell, Lynch then worked for Jeremiah Englehart. Most recently she was assisting Ray Handal.

Now she’s in a race saddling a horse under her name against the likes of Hall of Famer Jerry Hollendorfer, Kelly Breen, Monmouth Park’s leading trainer, and Gregg Sacco, who has multiple Grade 1 winner Mind Control entered in the field of seven 3-year-olds and up going six furlongs.

“It’s terrifying to think about at times,” said Lynch. “I just look at it as at some point I hope I’m where they are. And I keep reminding myself that all of them started somewhere, too.”

A 4-year-old son of Flat Out, Wendell Fong (the horse’s name is an obscure reference from an episode in the old “Frasier” TV sitcom) will need to re-capture his 3-year-old form if the colt is to become Lynch’s first career winner. Robertino Diodoro trained the horse in his last start, when he was fifth in an $80,000 optional claimer at Saratoga on July 23. Jorge Vargas, Jr., who rode the horse his first six career starts and accounted for all three of Wendell Fong’s career victories, has the mount.

“He’s a really cool horse,” said Lynch. “His last race he was a little bit out of form but I had a thought to give him one more shot in a stakes race. He was running really good in stakes company at Oaklawn and I felt the race at Monmouth Park fit him. We put Vargas back on him because they did so well together when Wendell Fong was a 3-year-old.”

Lynch says she hopes her emotions don’t get the best of her when she winds up saddling her first winner – but suspect they will if it comes in Saturday’s Mr. Prospector Stakes.

“I don’t know if I’ll be able to talk after the race if we win it,” she said.