The Amerigo Vespucci Society (AVS) of Long Branch New Jersey has announced the recipients of their annual academic scholarships. This year’s scholarships, to be applied for the 2020 Fall semester, have been awarded to two New Jersey high school seniors. 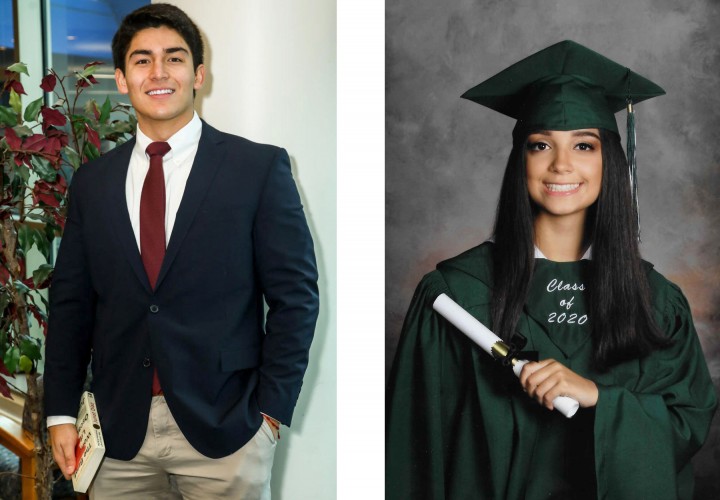 Eros Bottino (left ) has been accepted to Harvard University. Giuliana Santucci is heading to Monmouth University.

The first recipient, Eros Bottino, is a recent graduate of Christian Brothers Academy in Lincroft where he was an honors student and a star varsity athlete. Eros is trilingual whose native language is English. He is fluent and proficient in Italian and Spanish. Eros was voted by the Asbury Park Press as the athlete of the decade within the category of Shore Conference boys track and field. Eros has been accepted to Harvard University where he will be a member of their track and field team. Eros plans on pursuing Mechanical Engineering.

The second recipient, Giuliana Santucci, is a recent graduate of Livingston High School in Livingston, where she was an honors student and varsity cheerleader all four years. In addition, she performed as a Spirit of America cheerleader in the New York City Macy’s Thanksgiving Day Parade. Giuliana is bilingual whose native language is English. She is fluent and proficient in Italian. Giuliana has been accepted to Monmouth University where she plans on pursuing a field in Education.

AVS President Joseph Sirianni stated, “It is an honor for our organization to award these scholarships. We wish these two young adults the best in their future endeavors.”

The AVS takes its name from the famous 15th century Italian explorer and map maker. The AVS has a long history in Long Branch dating back to its founding members in 1875. The organization was originally established as a mutual aid society where Italian men could congregate, escape from discrimination and anti-Italianism that began during the period of large-scale Italian immigration during the late 19th century. Since that time the society members have made it a priority to assist each other and their families when there was/is no other place to turn.

Today, the AVS continues to be a mutual aid society as well as a 501(c)3 organization assisting individuals and organizations in the community and providing educational scholarships. They are active in combating pervasive negative stereotyping and defamation of Italian Americans in the media and promote the extraordinary history and accomplishments of Italians and Italian-Americans. They also promote the admiration, general appreciation and love of Italy, its culture, society, arts and people. The AVS joins other local and national organizations in promoting Italophilia and combating anti-Italianism.