Mayor Pallone: Progress on Seaview, parks and around the city

By Neil Schulman - The area around Lake Takanassee is very different than it was a year ago, and that’s far from the only spot that’s gotten some improvements. The area by the train station is in the middle of a facelift, and other parts are getting some new looks as well.

“Last summer, with the county, there was a total renovation of Takanassee Bridge,” Pallone said. They not only fixed the structure, but added new lighting and improved paving. Long Branch followed this up when it got a $40,000 grant to beautify the area around the lake with its more landscaping.

The city also worked on beautifying and improving Branchport Park. Among other things, there’s a new boat ramp and paving there.

The city also redid Liberty Park on Union Avenue and worked on several small parks around the area, including the triangle in uptown Broadway, the former community garden on Sairs Avenue, and West End Park.

Pallone said that a grant for Jackson Woods Park means that work will be starting in May or June, improving the appearance around the trails and paths there. He said that park improvements are important to the city.

“We just want to do more of that.” 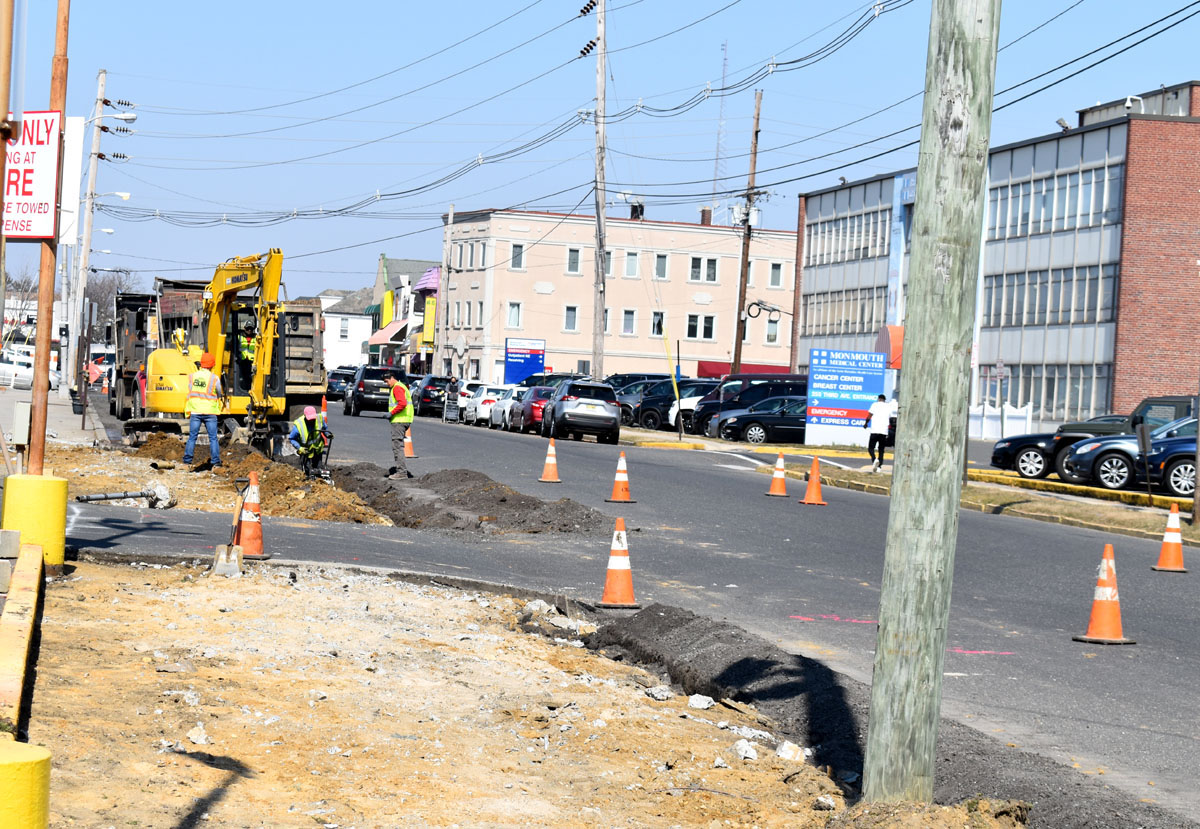 The work on the sidewalks on Third Ave are well under way. In front of Fine Fare Supermarket the concrete is poured and he bricks are installed.

In similar news, work is underway on Third Avenue by the Long Branch railroad station. That’s the result in part of a $500,000 Transit Village grant. Transit Village centers are areas recognized by the state to encourage mass transportation by improving the areas around them. Last year, Long Branch received the half-million dollar grant, the largest in the state.

They also received another $250,000 grant for improvements.

These are going to improving the roads, sidewalks and other parts of the area around the train station. And during the summer, the station’s parking lot was repaved and the station repainted, from what Pallone described as a “mustard” color to something more reminiscent of the nearby beach.

The roadwork on Third Avenue began in early March and is expected to take 75-90 days.

One of the two long-unused buildings that make up Seaview Towers on Ocean Boulevard has come down, and the second one is in the process of being removed.

Pallone said that when he ran for office, one of his team’s platforms was addressing abandoned and unused buildings in the city. 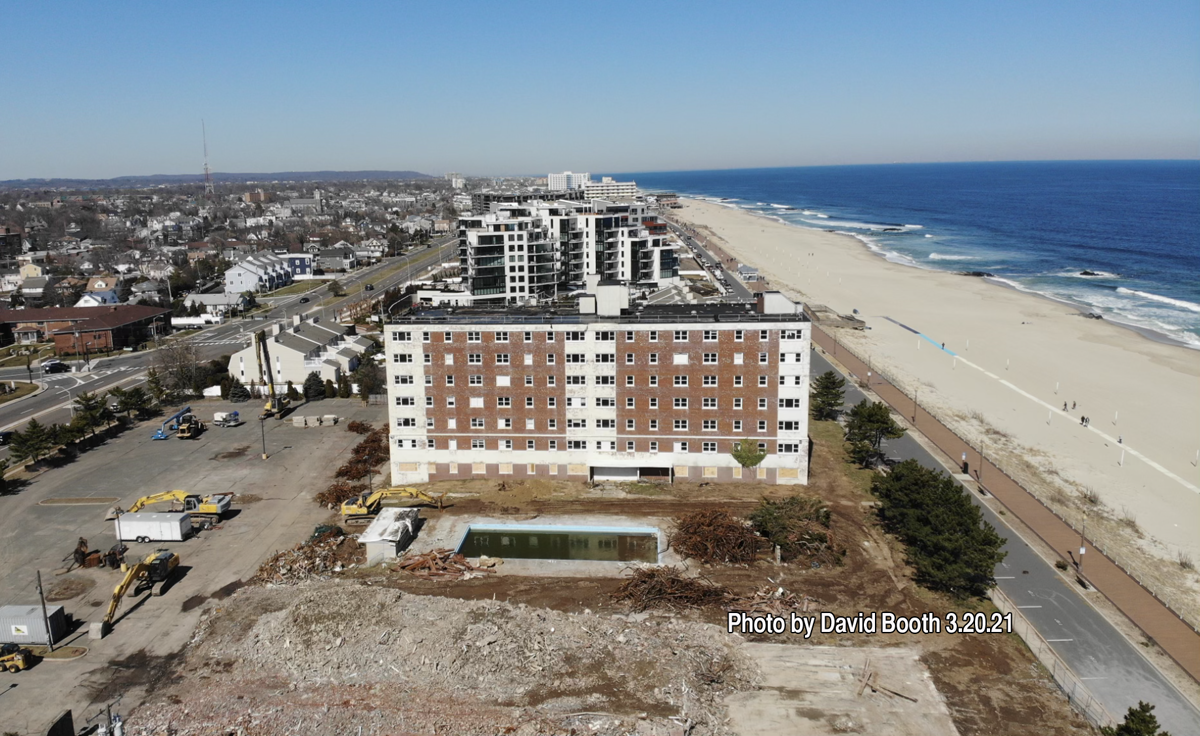 Demolition of the south tower is complete, and work has begun on the north tower. Demolition is expected to be complete by Memorial Day, with that section of the boardwalk reopened.

“That was a promise we made, to tear down abandoned buildings,” he said. Seaview Towers is the most prominent example of that.

If work continues on schedule, it will be taken down by Memorial Day.

After it is demolished, the city will open up the boardwalk. In the meantime, they’ve put mats along the beach so you can walk on the sand on that stretch. It’s proved popular.

“A lot of people are using these mats, which is good,” Pallone said.

Things still aren’t back to normal, but Long Branch is working with businesses to make the process of staying open easy.

Starting in May, Brighton Avenue will be closed to traffic Fridays to Sundays, 4-11 p.m., to make dining outdoors easier. We’re trying to help residents and even the store owners,” Pallone said.

A few months ago, the city held a business resource fair, providing information and resources useful to them. Another is being planned for April.

During the pandemic, the city also got several CARES grants of $5,000 to assist businesses. “That’s not a lot, but it helps,” Pallone said.

Long Branch also has a few general programs to assist business owners. It offers a five-year tax abatement on up to $100,000 worth of property improvements to businesses. Parts of the city are also Urban Enterprise Zones, and businesses in the UEZ can apply to pay half the normal sales tax rate.

The City of Long Branch has provided Covid-19 vaccines to “thousands” of residents,” Pallone said.

They’re not the only ones giving out vaccinations, but they’re targeting groups which may have difficulty with the more conventional process. “Seniors, those who are underserved, who don’t have access to a computer,” Pallone gave as examples.

With the help of the Visiting Nurse Association, Long Branch has been trying to make the process as simple as possible. They have a phone number set up if registering online is tricky, and they make the vaccine accessible.

“We literally went door to door” for the homebound to get vaccinated, Pallone said.

Pallone said the city employees have been on top of things and working hard.

“It’s a real advantage we have our own Health Department,” he said. “They’re there every day. Our police and office of emergency management have been wonderful too.”

Among other things, the city makes sure that there’s always someone who speaks Spanish and Portuguese.

Long Branch’s goal is to make the time between when residents place the call and get the vaccination as short as possible, ideally within 7 to 10 days.

Pallone noted that this is a group effort, not just the city and the VNA. Monmouth Medical Center has helped give vaccinations, and Monmouth County has donated supplies of the Johnson & Johnson vaccine to the city. The Family Health Center has also been working to vaccinate its clients.

Pallone said one of the reasons that the city is so efficient is because they were able to adapt their testing procedures. Earlier in the pandemic, there were many residents who needed to be tested but had trouble getting to places which could administer those tests, and the city worked out ways to make it feasible.

Any Long Branch resident who qualifies for a vaccine can call the city at 732-571-5694 to arrange an appointment.