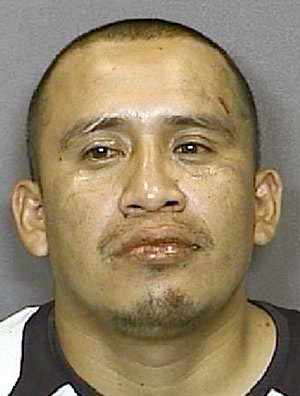 Long Branch – Detective Michael Verdadeiro, was off duty and ordering food at Por Dol Sol restaurant on Broadway the other night when he was approached by an employee seeking his assistance.

According to the Long Branch Police Department, an El Salvadoran national, Edgar Roland-Santo Velasquez, 28, of South 5th Ave., was intoxicated and harassing restaurant employees. Verdadeiro approached the drunken Velasquez and identified himself as a police officer and asked Velasquez to leave the restaurant.

Valasquez refused to leave then became very abusive and started cursing and yelling. Verdadeiro began to escort Valasquez out of the business. Once outside the restaurant, Valasquez yelled to another man (in Spanish) who was allegedly waiting outside to help him attack Verdadeiro.

At this point Verdadeiro again identified himself and produced his police badge and requested that the two men leave the area. Valasquez, in Spanish, told Verdadeiro; “I kill police in my country. I got a knife and I am going to kill you.” He then attempted to punch the LB police officer.

Verdadeiro slipped the punch and attempted to wrestle the drunk to the ground. One employee of Por Dol Sol called LBPD HQ and reported the officer needed assistance immediately while others help Verdadeiro get the two men under control.

Officer Joshua Wagner responded and with Verdadeiro’s assistance placed the two men under arrest. Verdadeiro suffered minor injuries during the struggle. Velasquez is charged with threatening to kill a police officer, aggravated assault, and defiant trespass. He is currently at the MC jail in lieu of $25,000 bail with no ten percent option.

The other man was identified as Wiber A. Martinez, 23, of Pacific Street in Long Branch. He was charged with hindering and resisting arrest. He is also at the county jail in lieu of $5,000 bail.

Both men are being held on an additional detainer by ICE, the U.S. Immigration and Customs Enforcement Agency.

Photos by the LBPD