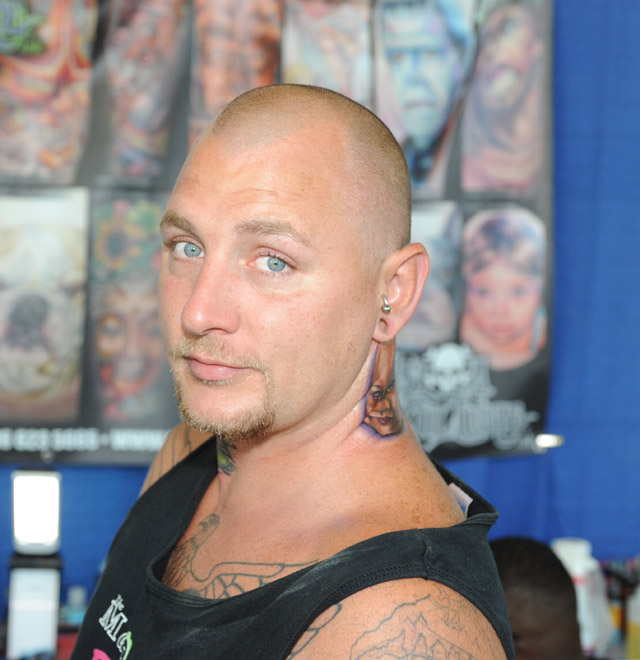 By Walter J. O’Neill, Jr.
Asbury Park – Over 150 of the world’s best tattoo artists gathered in the city for three days last weekend for the 2nd Annual Visionary Tattoo Arts Festival. Starting Friday afternoon, thousands filed into the Convention Center on the boardwalk to either get a tattoo, watch tattooing or enter one of the many contests.
At the conclusion of the three days of inking, one local man walked away with the biggest honor of all. Eric Eastborne, master tattoo artist at Body Art World on Broadway, Long Branch, was named Best Overall Tattoo Artists.
“I tattooed a pumpkin from a horror flick on a client Friday night,” said Eastborne. “It took well over six hours, and he is really into horror film tattoos.” Those six hours of work earned Eastborne his second overall best in tattooing award in as many years.

“You have the best tattoo artists in the United States right here, doing what makes each one of us unique,” said Eastborne. On Saturday afternoon he hooked up with a tattoo artist friend from New York and had his son, Tank, tattooed on his neck.

Besides all the ink, the festival also offered live painting by Chet Zar, the artist for HellBoy 2. It also featured “Show Devils,” which is billed as the world’s most dangerous show. It was a mixture of the old style freak shows with a modern twist.

Serana Rose, “The Electric Girl” performed neon swallowing and glass eating. The famous “Tattooed Puzzle Man” who has appeared on the X-files and goes by the name of “The Enigma,” along with the hot and sexy “Fire Eater” performed some stomach-turning stunts.

One of the strangest performances was the Suspension by Skin Mechanics. They are a Florida-based group who travel the world and push steel pins through the skin and hang from surgical hooks. They say it was originated from Native American rituals which they have evolved into a mind over matter edge of your seat show.

Other side shows included Parkour by NYPK, a group of young men and women who seem to defy gravity as they leap from place to place. Liberation Skateboards and the Garden State Skate Magazine were on hand to demonstrate some new techniques and board designs. The Peek A Boo Revue out of Philadelphia had a group of sultry women keeping the old tradition of cabaret alive. One high flying act was Circus Eris, amazing aerialist from Brooklyn, who demonstrated her acrobatic skills high above the stage floor.