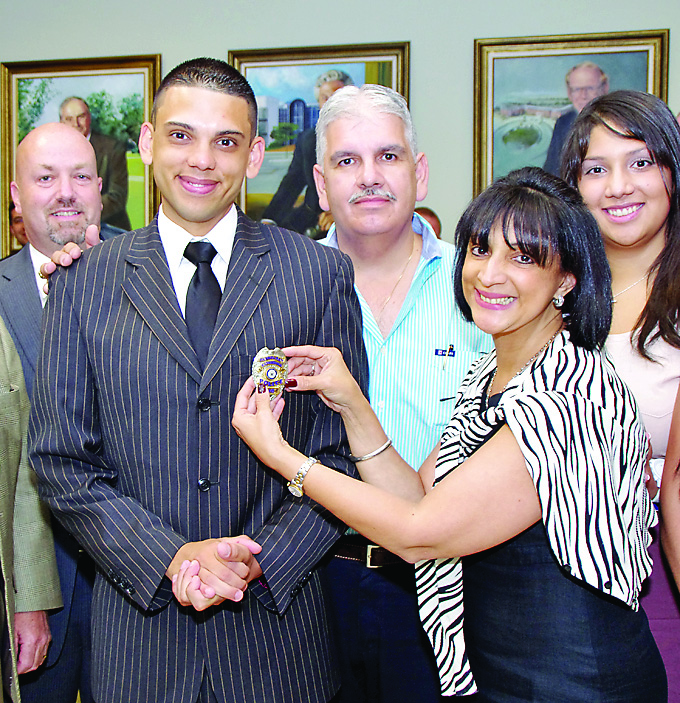 Originally published Aug. 4, 2011
By Jonathan Weber
— Two new patrolmen have been added to the roster of the Eatontown Police Department and were sworn in at last week’s Eatontown Council meeting. The two men are replacements for retiring officers.

﻿Former Plumstead Township Police Officer Christopher Quackenbush moved to the Eatontown Police Department. He is shown here getting his new badge pinned on by girlfriend, Jessica Casamento, while his father Daniel looks on.


Police Officer Christopher Quackenbush moved to Eatontown from Plumstead Township in Ocean County. He is an honor student graduate of Central Regional High School in Bayville, where he excelled in football, baseball, and track. There he earned the U. S. Marine Distinguished Athlete Award for Leadership and the Sam Pepe Leadership Award for football.
Quackenbush has a Bachelor’s Degree from Fairleigh Dickinson University in Sociology with a minor in Criminal Justice and had an incredible 3.6 grade point average. He won the Outstanding Achievement Award in Sociology and was a member of the Sociology National Honor Society. He played both baseball and football at FDU with a four year varsity letterman in football.

Newly sworn in Police Officer Jorge (George) Gonzalez comes to the Eatontown from the Princeton University force. He was born in the Dominican Republic where his father was attending medical school. He was two years old when his family moved to New Jersey and opened up a medical supply business in Middlesex County. The business is now in its 21st year.

Gonzalez graduated from St. John Vianney High School in Holmdel, where he was the editor-in-chief of the school newspaper. Upon graduation, he attended Middlesex County College, joining the local first aid squad and earning his EMT. He then transferred to Rowan University, working nights on ambulance service while attending school during the day. In May 2008, he graduated with a B. S. degree in Business Administration and from the Police Academy with a class II certification.

He then worked as a special officer in Perth Amboy and then Princeton University and earned his full Class A certification for the Gloucester County Police Academy.