A slab of steel, empty beds; LB receives a part of history 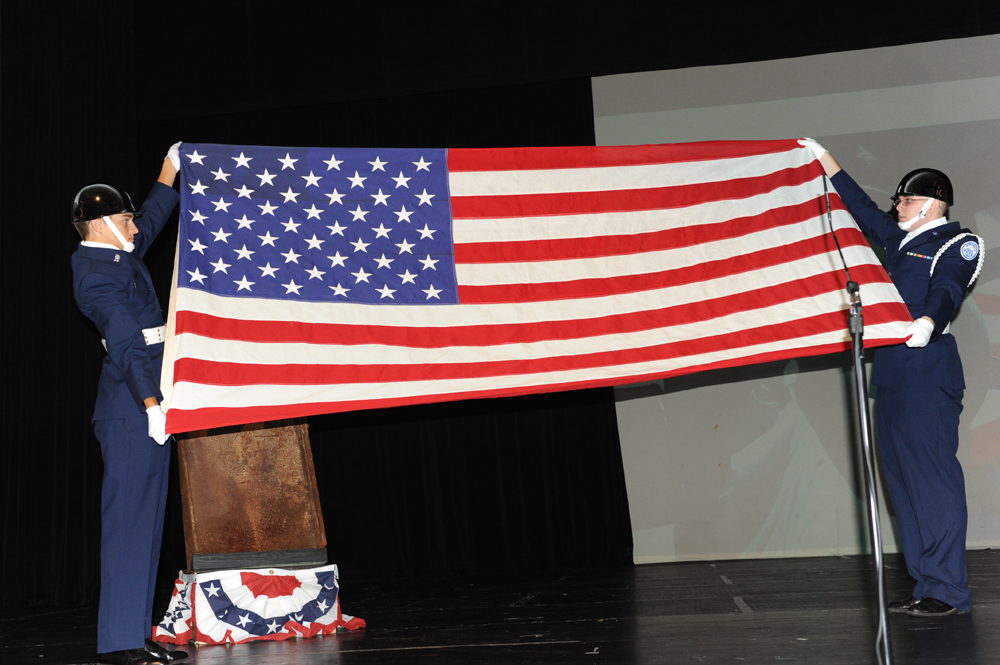 By Patty Booth O’Neill
It’s a dubious honor. An honor no American would ever choose to be a part of. No human should ever want to be a part of. But because we can’t turn back the clock or rewrite history, 9-11 is now a part of us all.
On September 9, the auditorium at Long Branch High School was filled with students and local dignitaries for the unveiling of a piece of a steel removed from the twisted rubble of World Trade Center.

The ceremony began with  the National Anthem performed by high school student Keziah Spiegel, followed by a a prayer by Jordan McKinzie.
The donation of the steel beam was orchestrated by New Jersey Senator Sean Kean. “I’d like to thank Senator Kean for helping us get this piece of steel from The World Trade Center,” Long Branch Superintendent Mike Salvatore said. “We are very grateful.”
Every person in the auditorium was honored and filled with pride to be part of the ceremony.
“It’s a reminder that you really can’t take anything for granted,” said 10th grader Shabazz Shuler.
“You can never forget the past,” said Antione Felder, also in the 10 grade. “You should never forget history. It’s important.”
Both students were only five years old when terrorists flew planes into the World Trade Center in New York City, into the Pentagon in Arlington, Virginia, and had hijacked a plane that was crashed into a field in Shanksville, Pennsylvania, believed to be headed for the White House.
“I don’t remember it when it happened in 2001,” Shuler said. “That’s why this ceremony is so important for all of us.”
The steel beam, highlighted on stage  by a spotlight and still hidden beneath an American Flag, was flanked by the Long Branch High School Jr. Air Force ROTC. Two members, Thomas Wright and Andrew Ashton, lifted the  flag, folded it with military precision, and presented it to Salvatore.
Long Branch Board of Education member Avery Grant spoke to the  audience and talked about patriotism and their future. He urged those attending to remember the more than 3,000 who died in the three terrible attacks. “As a retired Army soldier, who has been around the world, I am proud to be an American!” Grant said. “God Bless America and all of us — proud, loyal Green Wavers. I salute you.”
“If you’re old enough, everyone remembers where they were when Kennedy was shot,” said Long Branch Mayor Adam Schneider. “And just like the Kennedy assassination, everybody remembers exactly where they were when the planes hit the World Trade Center.”
Schneider said he remembered learning  about the attacks while  at the courthouse in Trenton. He rushed back to Long Branch and the first place he headed to was Monmouth Medical Center. He had been told that Monmouth  was one of the main hospitals on the list for survivors being sent to New Jersey from New York,” “But when I got there all the beds were empty,” he said.  “It was an extremely sad sight.” There were no survivors to be sent to New Jersey.
The audience was entertained by students from Anastasia and Morris Avenue schools, who sang patriotic songs. The Long Branch Middle School Choir ended their segment with  John Lennon’s “Imagine.” High school student Jordan McKinzie led the audience in prayer and then Salvatore ended the ceremony.
“This is an actual piece of World Trade Center steel,” Salvatore said as he rested his hand on the cold slab of metal.  “And it will be on display at the school forever.”