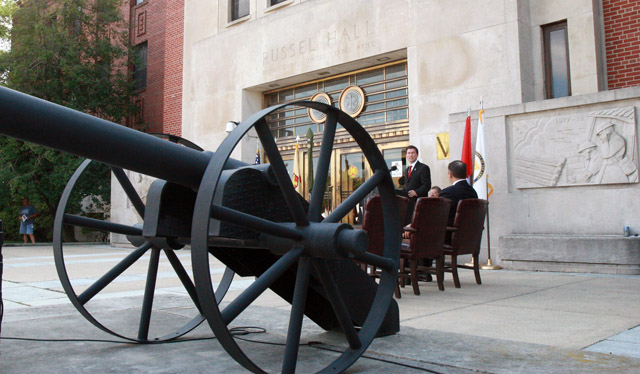 By Jonathan Weber
With the lowering of the flag on Thursday September 15 at 4:30 p.m. at Russell Hall, Fort Monmouth closes its 94-year history and fades to black. The original home of the U.S. Signal Corps, the developer of the first radio equipped weather balloon, the originator of radar, the first ones to bounce radio signals off the moon, and foremost the electronic development laboratory for the Army is no more.

An inactivation and color casing — where a unit’s flag is taken down and put in a protective case — was held Tuesday on the Fort grounds.
Eatontown Mayor Gerald Tarantolo lamented the passing of the Fort. “It’s going to be a very heavy day. I’ve been thinking about it for five years. It’s going to be difficult.
“I remember as a young boy listening to the radio when Pearl Harbor was attacked. They interrupted to say ‘Pearl Harbor was attacked.’ As a little kid, I had no perception of what it was all about. I went to my mother and asked if we were all going to die. She said they are very far away. Don’t worry; the soldiers at Fort Monmouth will protect us.”
The closing of the military facility, ordered by the BRAC commission in 2005, was supposed to cost the government $780 million and save over one billion dollars, but it soon became apparent the numbers weren’t going to add up.
It has already cost the Army twice the estimate, over $1.7 billion and the Government Accounting Office (GAO) found the Army’s cost figures were deeply flawed.
Efforts to save the Fort from New Jersey Senators and Congressmen fell on deaf ears. Monmouth County has lost an estimated 9,000 jobs and as much as $3.3 billion in its economy.
The 1,126 acres, almost two square miles of Army property, lie in the municipalities of Oceanport, Eatontown and Tinton Falls. By December of this year, FMERA, the Fort Monmouth Economic Revitalization Authority, a state agency charged with transitioning the land back to the three towns, is slated to have a zoning map ready which will allow redevelopment to begin.
Mayor Tarantolo feels confident the former military housing of Howard Commons will be able to name a developer for 270 housing units to replace the dilapidated 456 homes that currently sit on that particular site. It would be the first of plans for the complex.
Already, the Suneagles Golf course has been leased out by FMERA for one year. It sits on Eatontown Borough land, but the town is not expected to get any income from the rental until the final agreements for transferring the ownership of the grounds takes place.
A hotly contested plan to use the former Mallette Hall as a new Eatontown Borough Hall is incorporated into the Fort’s business plan and actually lists the building as such. Recent studies have shown the Borough Hall is outdated and overcrowded and needs double the current space.
Democrats on Council approved a study to see if the move from is feasible and what costs would be entailed. GOP Councilmen vehemently opposed spending any money on the study and Councilman Kevin Gonzalez even questioned if there is a space problem.
Mallette Hall has 57,000 square feet and the study recommended 30,000 square feet for the town hall. The current building on Broad Street has only 15,000 square feet. The mayor wants to lease out the excess office space, possibly for a regional court for the county.
As property is sold on the former military facility, the federal government would get 70 percent of the revenue, FMERA 30 percent. A question remains how much of that 30 percent the state will gobble up and how much will the municipalities get. Once the land is developed, the buildings and houses become ratables for Eatontown, Tinton Falls, and Oceanport.