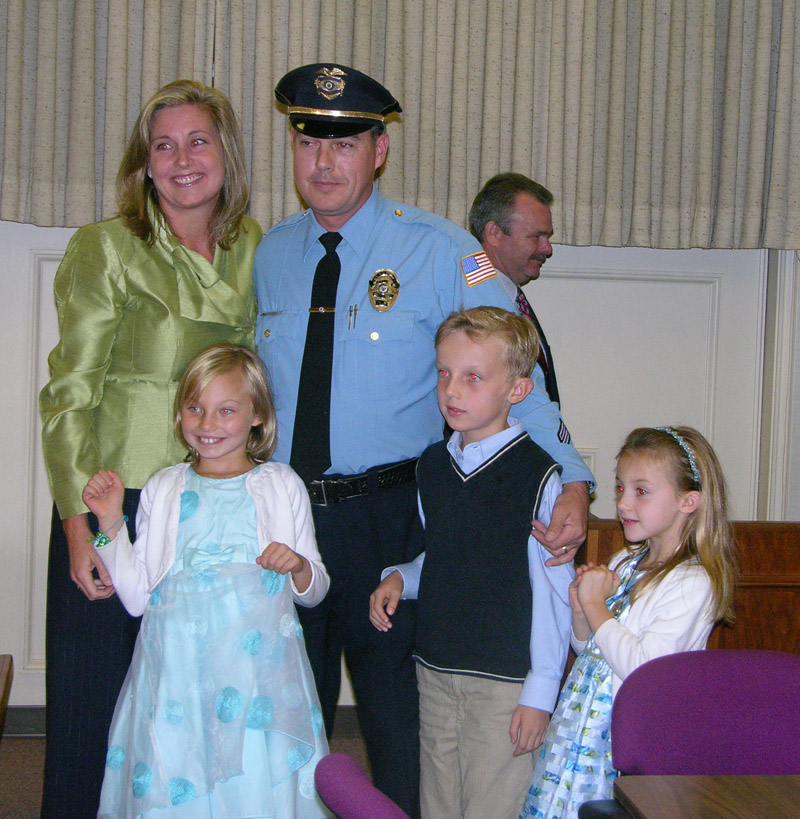 Sgt. Michael Kelly and his family pose for a photo after he received his promotion to the new rank.

By Neil Schulman
Oceanport — Oceanport Police Officers Michael Chenowith and Michael Kelly were both promoted to the rank of sergeant at the Oct. 6 Borough Council meeting.

Sgt. Michael Kelly and his family pose for a photo after he received his promotion to the new rank.

Michael Chenowith’s family and Mayor Michael Mahon look on as he takes the oath of office for police sergeant.


Both have received numerous awards and commendations during their careers.
Mayor Michael Mahon said the officers had set examples for the younger officers of the department, through leadership and positive attitudes.
“They are the Department Field Training Officers, teaching new probationary officers,” Mahon said.
In addition to standard police duties, they also have been heavily involved in traffic safety. Mahon said that if you saw a signboard about traffic around the borough, or an announcement in the Oceanport newsletter, it was probably written by one of these officers.
Chenowith, originally hired in 1997, has received the Life Saving Award, Chief’s Achievement Award, Exceptional Duty Award, Honorable Service Award, and department commendations. Mahon said that his professionalism has been noted frequently.
“The court even received a letter complimenting Mike on his professionalism, which was enclosed with the payment of a ticket,” he said.

Kelly is involved with all traffic planning for road projects in the borough, and is a Nationally Certified Drug Recognition Expert and a Certified Child Safety Seat technician.

The two took the oath of office surrounded by friends, family, and fellow officers.