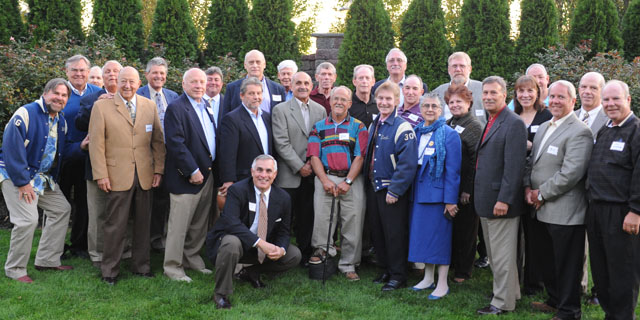 By Walter J. O’Neill, Jr.
In 1963, Shore Regional High School in West Long Branch was only in its second year of existence. As a new school, it was difficult for the sports programs to get teams to play. Dave Wachter, head coach of the Blue Devils football team, who finished 5-4 in its first season, said that he would play any school within a 300 mile radius of Shore Regional.

And those challengers found that Shore was a force to be reckoned with.
The first game of the ’63 season was a 13-7 win over Middlesex. Franklin Township was the next opponent, and fell 7-6 to the Blue Devils. The third game of the season was the first of five shutouts, as Shore beat Upper Freehold, 27-0. That win was followed by a 13-0 victory over Madison Township.

The fifth game was a road trip to Connecticut where the Blue Devils played to a 7-7 draw with Notre Dame. They came back to New Jersey and beat Southern Regional 23-0, then Raritan Regional 10-0, Mater Dei 40-0 and earned a 13-7 win over Monmouth Regional to end the year.

Newspaper accounts from 1963 showed how sports writers were impressed with the much-improved Shore Regional team. In fact, one headline called the undefeated Shore Regional Blue Devils the “Cinderella Team” of 1963.
Last Friday night, most of the team members reunited after 48 years to celebrate that banner season. Over the decades team members have spread out to Mexico, Canada, and all over the United States. Unfortunately, five of the players are no longer alive.