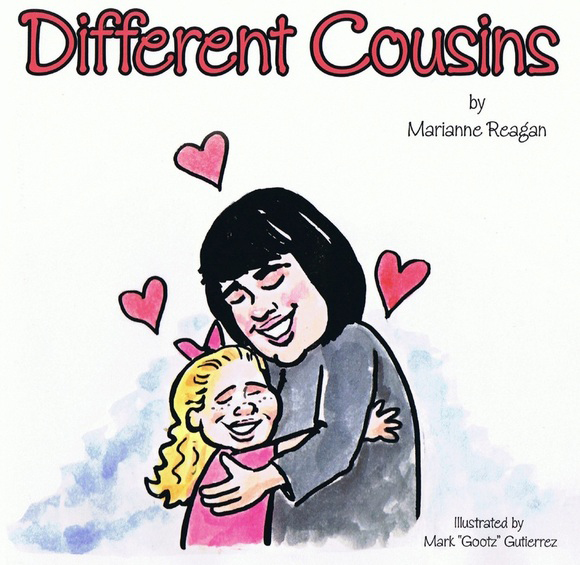 By Neil Schulman
Eatontown resident Marianne Reagan wants her new children’s book to be successful, and raise money for the  LADACIN Network. But ultimately she hopes it will open some eyes about cerebral palsey.

Marianne Reagan and her daughter Kelly.

On the first pages of “Different Cousin,” Kelly and her cousin Katherine play with dolls together, and pretend to read to each other, though neither knows how.
Kelly is 30, and Katherine is 4. As Katherine grows, and learns to read, she wonders why Kelly can’t. Her aunt Manny explains that Kelly has cerebral palsy, and there are many things she can’t do, but still many things she can, including bowling, basketball, tennis, and crafting. She may do them differently, using a wheelchair, but she can do them well.
Reagan says “Different Cousins,” is based on real events.
“This is a true story about my daughter, Kelly, and her cousin, who’s much younger, explaining why Kelly can’t do some things,” Marianne said.
Kelly, 32, has cerebral palsey. It draws attention.
“We are stared at in the mall and various other places,” Marianne said. “It is 2011, but people are still curious.”
Different Cousins was written in part to explain this.
“I never wanted to write a book until my father said you’ve got to tell your story,” Marianne said.
Marianne, a teacher at Atchison Elementary School in Tinton Falls, is working to promote the book. She says that the book seems to resonate with a wide age range of children.
“I’ve read it to first, second and third graders at the school,” she said.
The book is self published, but is available through major websites such as Barnes and Noble and Amazon.com.
Kelly goes to adult programs at LADACIN (formerly known as Cerebral Palsy of Monmouth and Ocean Counties). The organization has been a big help to the family, and Marianne decided to donate some of the proceeds from the book because “I’ve got to give back a little.”
Marianne wants to spread the book, and sold copies at a recent teacher’s convention. But Kelly’s work proved more popular.
“We sold 45 books there. My daughter makes napkin rings. She sold 125.”
She has big dreams for the book, which she hopes will raise awareness of cerebral palsey. She’d love to see it translated into Spanish. She’s also hoping for an audio version, for Kelly’s sake.
“I’ve got to find someone famous to read this book on tape. That’s how my daughter reads.”
Ultimately, her main goal is to change people’s perspectives.
“If I can open anybody’s eyes about differences… I don’t know if it will be a big money making thing for either LADACIN or myself, but you know what? Dreams do come true,” she said.
“I’m very enthusiastic. You’ve got to try. You’ve got one life, one shot. Let’s try it,” Marianne said. “And my daughter is feeling famous,” she added.