How many units okay for Roosevelt Ave. development? 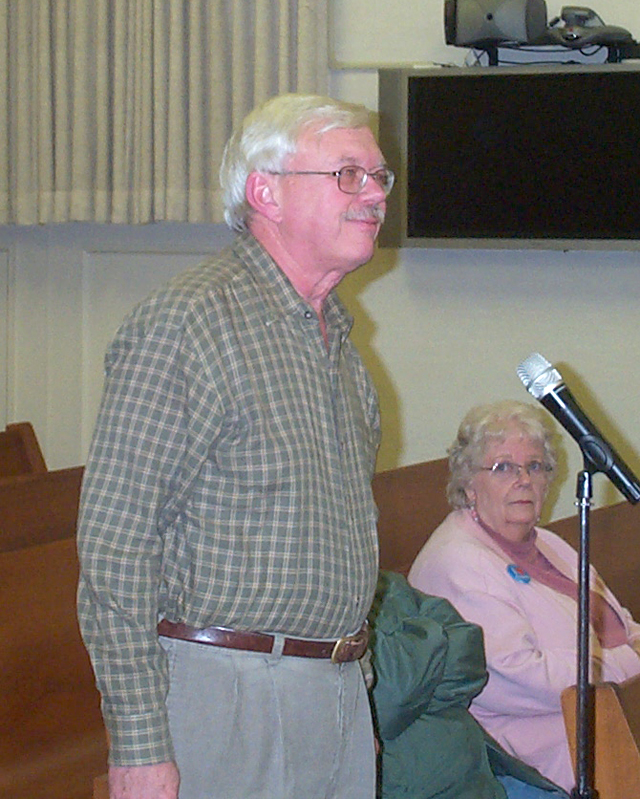 Lee Poole discusses his work in bringing sports and recreation to Oceanport.

By Neil Schulman
Oceanport — Oceanport presented a mayoral proclamation to Lee Poole for his decades of service to the Recreation Committee at the Dec. 15 Borough Council meeting.

Lee Poole discusses his work in bringing sports and recreation to Oceanport.

Poole, who has served on the committee for 26 years and is stepping down at the end of the year, received a standing ovation from the audience for his service.
Poole moved to Oceanport in 1980, and shortly afterward formed an adult athletic league. It was not just for competition, but for camaraderie, he said.
“We had one adult who could never play competitive ball, but we put him on second base,” Poole recalled.
That group still meets, and plays volleyball and other games.
Poole also made sure that there were opportunities for his three daughters.
“I feel good I helped to form the Two Rivers Girl Softball League,” he said. That let girls from Oceanport play teams from other towns. He would later help create the Two River Men’s Softball League, to allow people over 40 a chance to play.
On the Recreation Committee, Poole served two terms as president, and several times was the treasurer. He says he’s stepping down so that new faces can have a chance to contribute.
“It’s time, I think, to pass the baton to someone else.”
Mayor Michael Mahon, who presented Poole with the proclamation, said that the borough appreciated everything he had done.
“Words don’t go far enough, but you have a special place in Oceanport,” Mahon said.
Another longtime member of the Recreation Committee, James Foligno, is also stepping down. Council had prepared a proclamation for him too, but he was unable to attend the meeting. They hope to be able to honor him in person at a future date.
There is significant interest in the vacant seats on the committee, Borough Administrator Kim Jungfer reported. Oceanport received over ten applications, and many of them will be interviewed and examined in the coming weeks.