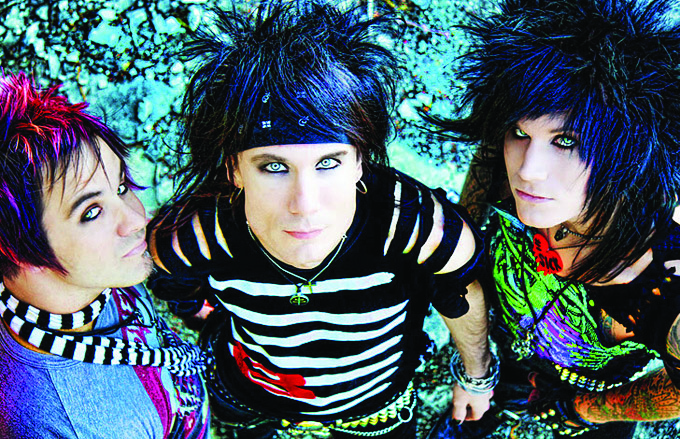 By Walter J. O’Neill, Jr.
Standing 6’5” and weighing in at only 100 pounds with pasty white skin, Jacob Bunton’s dream of owning a tanning salon and gym was not looking so bright. It was a good thing that his childhood friend David Lynam was looking to start a hard rock band. 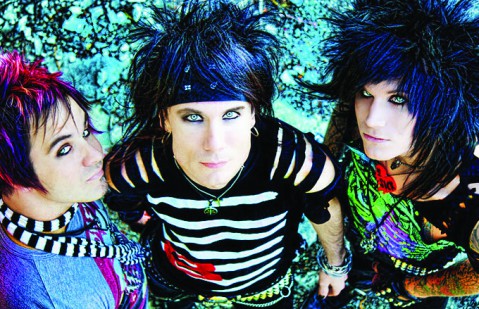 In 2001 the two friends formed the band Lynam in their hometown of Birmingham, Alabama. David was on drums and Jacob did the writing and performing vocals while playing guitar. The band needed a bass player and six months after they formed they located a blond self proclaimed hillbilly from North Carolina named Mark Dzier, and Lynam hit the road.
The group has the look of a hard rock band, the spiked and colored hair, black clothing with black nail polish and the swagger of stardom. Since 2001, they have performed at large venues opening for big name acts and getting booked on two rock and roll cruises, “Motley Cruise” and “ShipRocked.”
Slave to the Machine was the band’s third album to be released, and it peaked at number 21 on Billboard’s Top Independent Albums chart, and number 19 on Top Heatseekers chart. The first single on that album, “Tanis” shot up to number one on both the active rock independent chart and the mainstream rock independent chart.
The fifth album, Tragic City Symphony, peaked at number five. One song on that album, “Save My Soul,” also shot up the charts to the number five position. Rock groups Hinder and Eighteen Visions liked what they heard and asked Lynam to hit the road with them and open their 2006 tour.
Other big hits for the band are; “White Trash Superstar,” “Bling! Bling!”, “Life in Reverse,” “Tragic City Symphony,” and “Thank You Good Night.” My personal favorites are “Sister Babylon,” “Porn Star,” and “A Million Ways.”
Last year the hillbilly had an opportunity to expand his career and go into acting. The Tom Cruise movie/musical “Rock of Ages,” which opens on June 1 of this year,  needed a bass player. Out of the thousands who auditioned the producers picked Dzier, who left Lynam to pursue his dream of playing on Broadway.
That dream quickly became a nightmare for Dzier, who realized playing in a movie and then working a Broadway musical is not the life of a rock star. So just after a few months on tour with the musical he decided to leave and go back to acting. Dave and Jacob keep in touch with Dzier and post some hysterical updates on their official website.
However, the band needed to replace Mark and Facebook was the answer. Cody Elliott grew up in Alabama and then went over to the west coast to sign and play guitar in a band. However, he wanted to return to his home state and started looking online for rock bands in the Alabama area. That’s when he discovered Lynam and found Jacob on Facebook.
“We thought he was just a groupie stalker,” said David. He kept sending them messages and finally Jacob and David decided to meet with him.
“When we first saw him he had this gangster thing going on,” said Jacob. “He had two bandannas on his head with a baseball cap over them and had blond hair. I told David I was sorry I didn’t know what he looked like or what he sounded like.”
A few months went by and David and Jacob were performing at a club and Cody was in the audience. “I’m telling you, he was a stalker,” said David. “But we asked him to join us on stage to see what he had.”
According to Jacob they liked what they heard. “He changed his look to be more like us and we even got him to switch from guitar to bass. And he is learning all our material.”
Cody stated that he is always changing his hair. “I once had a three foot Mohawk, and change the color all the time.”. With that David and Jacob start laughing, and said they were just busting him, trying to get him rattled.
“It’s all part of being the new guy in the band,” said Jacob. “But seriously, Cody is a great addition to our band and we are fortunate to have him with us.”
As they tour the country and swing through the East Coast they always make time for a stop in Long Branch, where they have many friends. On Friday night, February 10, Lynam will be playing at the Nip-N-Tuck Bar.
“We love playing these small intimate clubs. And the Nip N Tuck has been great to us in the past,” said David.
Come out to the Nip N Tuck on Friday night for a free concert by a national act. If you love rock and roll, you will love Lynam.