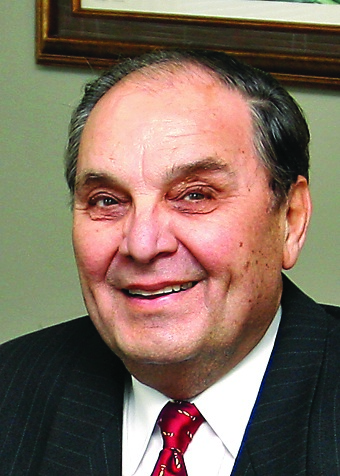 Compiled by staff of The Link News
What we do during our lifetime defines us as a person and how we’re remembered by those who knew us. This week, we heard story after story about a man who lived his 77 years defining himself as “Mr. Long Branch.”
On Sunday John A. Brockriede Sr., a lifelong Long Branch resident, passed away peacefully at home surrounded by his caring family.

Long Branch was saddened by the news and everyone had a different story about how Brockriede touched their lives.

“He had this uncanny knack of timing,” said Adam Schnieder reminiscing about his reelection campaign in 1994. His team would walk house to house for 15 hours and then meet at headquarters to rest and get something to eat. “That’s exactly when he would walk in and say, ‘What are you doing sitting around in here? Get back out on the street.’ He always had that sense of timing.”

Another story that stuck out was how a Long Branch family needed a place to live when they were losing their home and didn’t have the best credit. They turned to Brockriede, the one man they knew could help. That family is now living with peace of mind and the security of having a place to live and raise their family in Long Branch.

Brockriede was recalled as a tall, impressive man with a heart of gold and a mind for business. Friends said he truly loved his family, his community and worked hard to give back and help those less fortunate.

“A lot of people would say he is a good friend of theirs,” said ex councilman David Brown. “He was a compassionate man and he loved the city of Long Branch.”

“I tried to tell him my name was Joe but every time I went in he called me Ernie. Finally I gave up and just answered to Ernie. When I got my first gas card. (an Esso card, it was a while ago) I gave it to him. He asked why it said Joe and  I told him that was my name.

“He responded, ‘Why does everybody call you Ernie?’ I have fond memories of John. He was never too busy to say hello. A fine businessman and a true gentleman.”

Brockriede had built himself an impressive commercial and residential real-estate empire. And it all started at the age of 19, when he opened his own garage, known back then as Johnny’s Esso on Third and Morris avenues. That business later became Johnny’s Exxon which he operated for 32 years.

During the early 1960s Brockriede earned the trust of several business partners and started to purchase and develop apartment complexes throughout the city. Within ten years, Brockriede entered the restaurant field when he purchased and operated Hardee’s Restaurants throughout New Jersey. Those stores later turned into Kentucky Fried Chicken franchises.
Brockriede was not done with his business expansion; he then entered the world of auto sales. He became a partner in Finn Buick, and until his death was a partner in Circle Infinity, located on Highway 36 in West Long Branch.
His expertise of dealing with the community and understanding their needs and his keen self-taught business sense was highlighted as he was one of the founders of Jersey Shore Bank, in Long Branch. He served as a director of that bank and its successor banks, National State Bank and Constellation Bankcorp.

In 1998, “Mr. Long Branch” was a founding member of the Monmouth Community Bank in Long Branch, where he served as Vice-Chairman of the Board of Directors. That bank later changed its name to Central Jersey Bank in 2010, where he continued to work with the board.

Brockreide also showed he cared about his community through the many organizations and boards that he chaired and assisted. He served on the City of Long Branch Planning and Zoning Board of Adjustment, he was  a Commissioner on the Long Branch Sewer Authority, and was a trustee of the Monmouth Medical Center and the hospital’s Health Care Foundation.
Brockriede was also a member of the Board of Directors of Juvenile Diabetes Research Foundation and a trustee of the VNA Central New Jersey.

“Johnny was one of the nicest guys I ever knew in Long Branch.  We would talk for hours about finance and real estate,” said Edward Thomas, owner of  Shoreview Realty. “I’ve known him most of my life. My dad bought a Olds Toronado from him when I was a youngun’, then it became my first car.  Lots of memories everywhere.  This really upsets me. It’s going to be hard to imagine a Long Branch without Johnny Brockriede.”

“What can you say?” Long Branch City Administrator Howard Woolley added sadly as he remembered John. “He was one of a kind. A great friend, great citizen of Long Branch, a great human being. He was truly a wonderful guy. I can’t say enough about him.”

During the last few years, Brockriede suffered from cancer, but when you saw him he was always bright eyed and optimistic. He was committed to starting a special cancer research facility at Monmouth Medical Center.

When The Link News spoke with him about his plan and how much it was going to cost, Brockriede was honest. “This unit will not be able to help me. I probably will not be here when it’s completed. However, when it is finished it’s my hope that it will help others who suffer from this terrible disease,” said Brockriede. “I have worked hard all my life, and I love this community. How can I not want to help those less fortunate. Sometimes people just need a lift or people who can help them find that lift.”