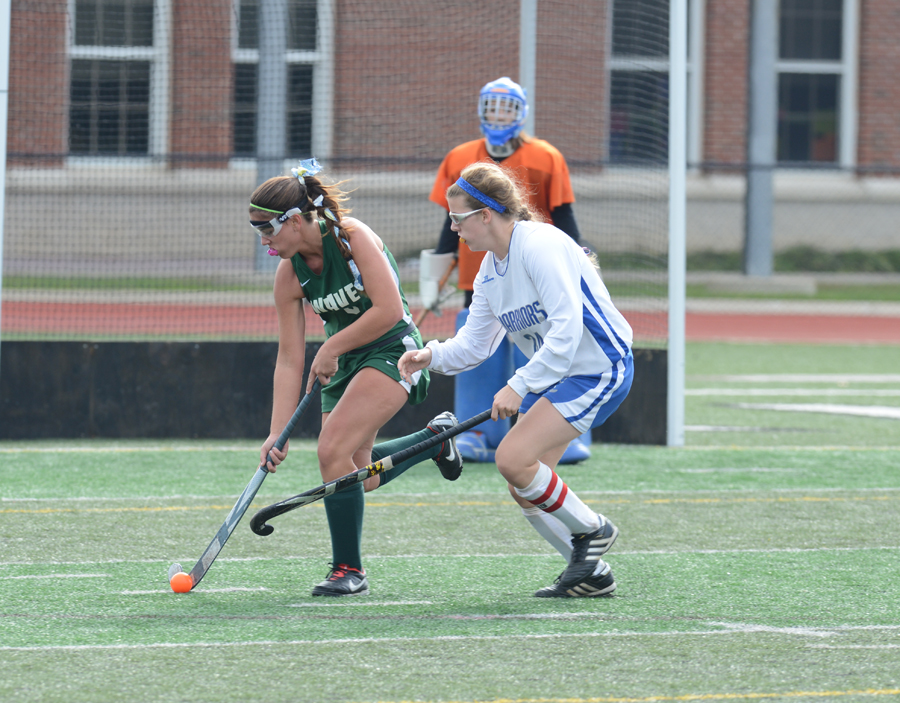 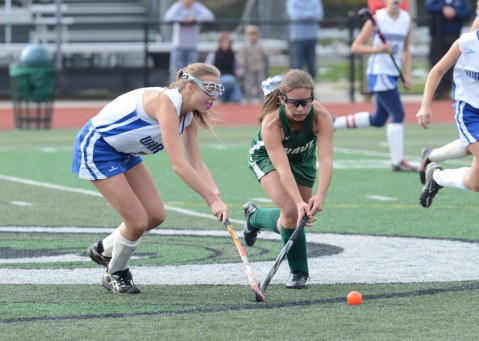 She is not the biggest or fastest player on the Long Branch roster, but Ruby Liss is one of the most consistent players. Here keeps the ball away from a Manasquan player. 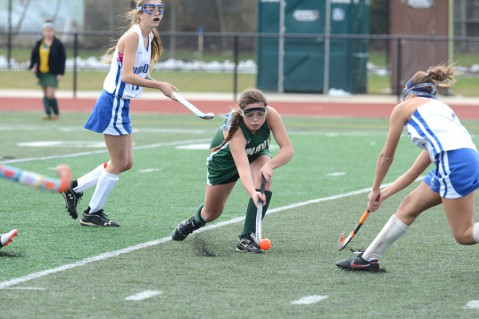 Walter O’Neill LINKsports Playing her heart out on defense is how Daisy Hoagland, a senior at Long Branch, was described by her coach during the NJSIAA quarterfinals. 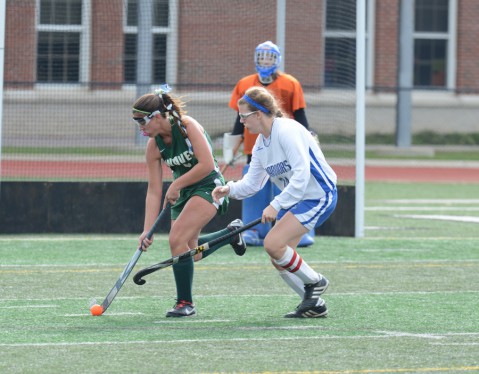 Long Branch senior Cassidy Egan controls the ball and keeps it away from a Manasquan player on Saturday morning during the quarterfinals of the NJSIAA Central Jersey Group 2 playoffs.

By Walter J. O’Neill, Jr.
The last time the Long Branch field hockey team made it to the quarterfinals of the NJSIAA state tournament was over a decade ago. Well, all that changed on November 10, after Allie Conlon, a sophomore, scored a goal 3:50 into the game against Manasquan.

Long Branch entered the Central Jersey Group 2 tournament as the sixth seed. In the opening round Long Branch received a forfeit win after Lakewood was unable to play. That set-up a round two match-up with Manasquan, the third seed.
Manasquan was unable to play on their field Saturday morning following Hurricane Sandy and the nor’easter of last week. So the venue was moved to Long Branch High School where they played on the turf.
Just over three minutes into the game Conlon, off an assist from Lexi Meyer, scored the winning and only goal of the game. “We are going to the semifinals. Our opponent will be Delran,” said Gina Keagle, head coach of the Green Wave. Delran is the number two seed, who had a bye round one and in the quarter finals beat Point Pleasant Borough 2-1.
“We are excited about going to the semifinals. I have said this all year, but I’ll keep saying it, we are a good team because everyone on the team contributes in a big way,” said Keagle. The philosophy going into this year was to be a group of solid dedicated players. “We play as a team and we win as a team.” With the victory over Manasquan the Green Wave improved to 14-6-1 on the season.
After scoring so early in the game the intensity seemed to magnify on Saturday morning. The defense was a major factor in keeping the game to a 1-0 victory for the Wave. “Daisy Hoagland, our senior center back, played her heart out making a diving save at the end of the game,” said Keagle.
With less than two minutes to play the Warriors mounted a furious attack on the Green Wave. A Manasquan player was able to get the ball into the circle and fired a shot at the Long Branch goal. Wave goalkeeper Ana Frazao was on the opposite side of the cage, but Hoagland made a dive and laid out flat blocking the shot. “It was the kind of save that give goose bumps, because it shows you have the heart of an athlete,” said Keagle. The coach also credited Frazao with a great game, making four saves in the win. Also getting high defensive praise was sophomore Alexa Rodriguez.
Long Branch offensively has a one-two punch in senior Kim Davis and Jancita Santos. Two of the quickest girls in the Shore Conference they are hard to defend. However, Keagle stated that Manasquan did a good job in keeping Davis and Santos in check. That is where the team spirit comes in for the Wave, as others stepped up.
“Lexi Meyer, a sophomore mid, comes soaring through the field playing great defense and offense,” said Keagle. The coach was very excited on her team’s victory and even more proud on their spirit and desire to succeed.