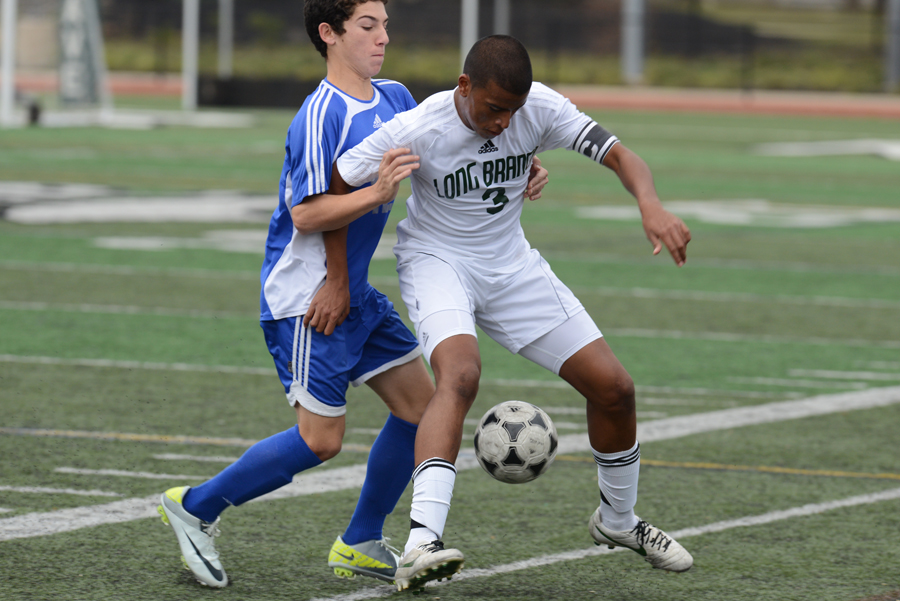 Walter O’Neill LINKsports Wilson Bonilla (3) a senior on the Long Branch squad, had an assist on a goal in the win over Manasquan during the opening round of the NJSIAA tournament.

Long Branch had six players in front of the Manasquan goal on a corner kick. The Green Wave beat Manasquan in the opening round of the NJSIAA playoffs. 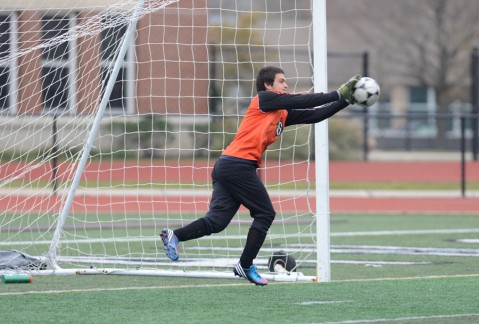 Long Branch senior goalkeeper Thomas McGlennon makes one of his eight saves in the win over Manasquan. 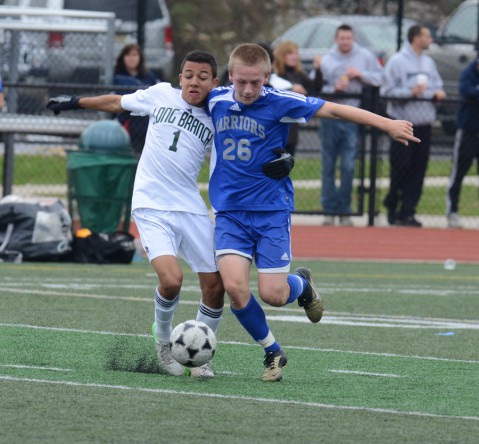 Walter O’Neill LINKsports It looks as if they are the best of friends, but in reality Samuel Hernandez (1) is fighting to keep the ball away from a Manasquan player. 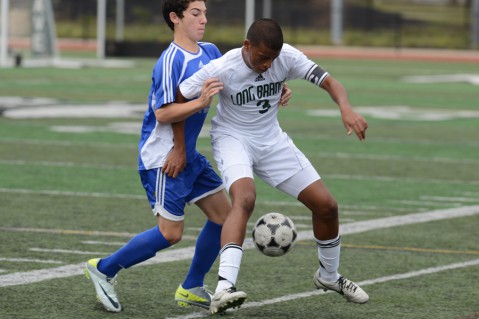 Walter O’Neill LINKsports Wilson Bonilla (3) a senior on the Long Branch squad, had an assist on a goal in the win over Manasquan during the opening round of the NJSIAA tournament.

By Walter J. O’Neill, Jr
It was not looking so good on Saturday afternoon for the Long Branch boys’ soccer team. They were hosting Manasquan in the opening round of the NJSIAA Central Jersey Group 2 state tournament.

Long Branch received the fifth seed in the bracket with the Warriors coming in at twelfth. The first half was scoreless, and then Manasquan scored a goal at the 43 minute mark. As the game clock ticked away so were the chances and opportunities for the Green Wave.
However, at the 55th minute Long Branch senior forward Welke Galvao was able to score off an assist from Wilson Bonilla, a senior midfielder, on-a-give and go play. That was all Long Branch needed to send the game into overtime.
After two overtime periods the game was still deadlocked at one goal each. It came down to the dreaded penalty kicks. The past two years Long Branch has been knocked out of the playoffs as a result of penalty kicks.
Last year Freehold booted the Wave in NJSIAA Group III quarterfinals, and the year before that by Ewing in the opening round of Group II play. Last season Galvao missed a penalty kick in the Freehold game, and this year he was going to make sure that didn’t happen again.
Before Galvao made the game winning kick after two overtime periods, Long Branch senior goalkeeper Thomas McGlennon made a critical save. According to Adrian Castro, head coach in LB, McGlennon is very confident in the net.
McGlennon stated after the game that as a goalkeeper it’s all about staying focused. He said that he has to prepare for each shot, and that is one opponent shoots to the right, the next player will shot to the opposite direction. And that is exactly what happened on Saturday afternoon, and McGlennon blocked two of the three Manasquan shots, the third hit the right post.
Then it was all on Galvao’s shoulders as he kicked a bullet into the right corner giving Long Branch the victory. “I missed my kick last year and that was hard to think about,” said Galvao. “I didn’t want to miss again. I had to forgot about that one and just do what I know how to do.”
With the victory Long Branch improved to 13-5 on the season and Manasquan drops to 9-8. The Green Wave will advance and face Robbinsville, the thirteen seed in the quarterfinals.