Accused buyers in operation “Hat Off” 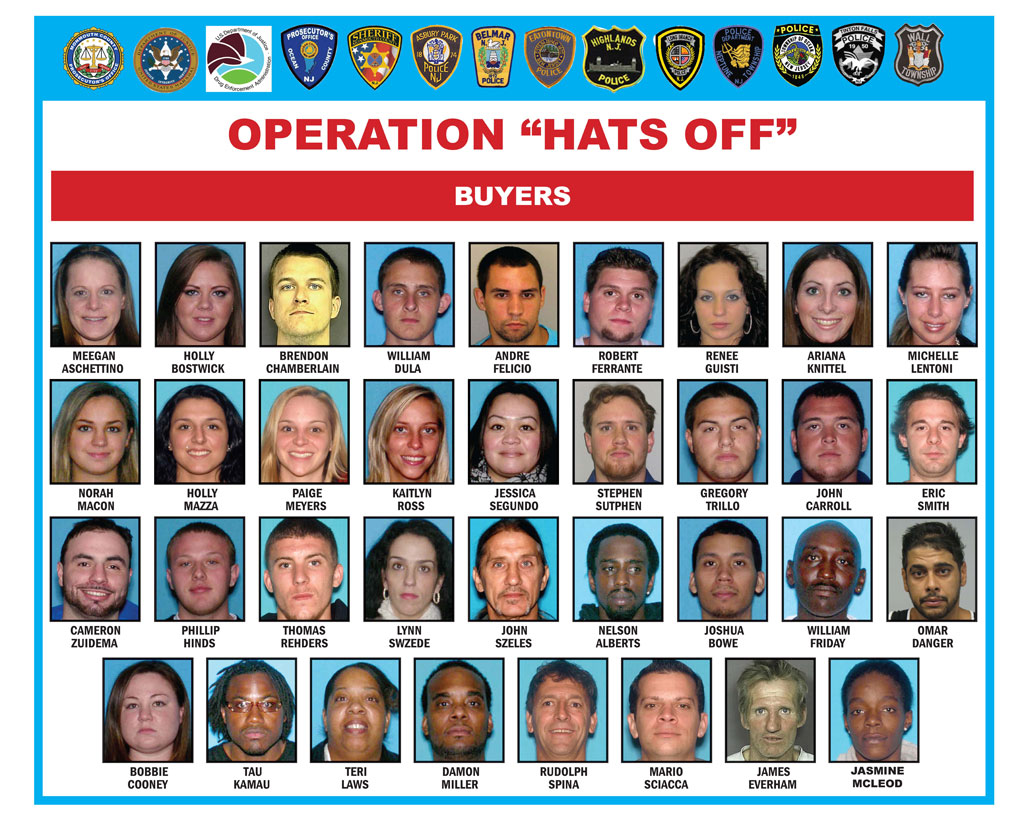 Buyers busted by the MCPO 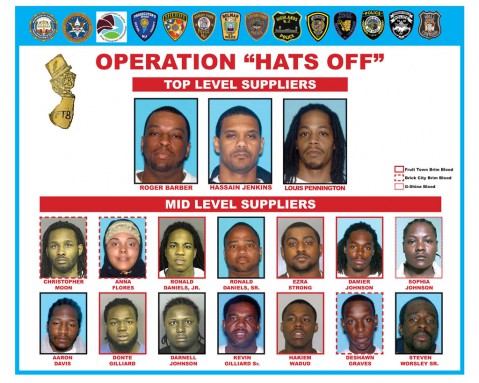 Suppliers according to the MCPO

52 people were charged today in a massive heroin sweep undertaken by the Monmouth County Prosecutor’s Office and a number of other law enforcement agencies, Acting Prosecutor Christopher J. Gramiccioni announced. Some of those arrested are members of a gang known as the “Fruit Town Brims,” a set of the “Bloods” street gang responsible for the distribution of significant quantities of heroin throughout Monmouth and Ocean Counties.

The eight-month investigation, titled “Operation Hats Off,” began last spring after the Office received information regarding gang activity and heroin distribution occurring in the shore area. During the investigation, members of the Fruit Town Brims and their conspirators orchestrated and/or personally sold approximately 200 bricks (10,000 bags) of heroin per week, including more than 1,000 bags of heroin to undercover detectives on dozens of occasions.

Overall, the criminal enterprise was responsible for the trafficking of more than 4,000 (200,000 bags) bricks of heroin during the course of the investigation. Law enforcement seized more than 300 bricks (15,000 bags) of heroin and approximately 17,000 in U.S. currency. A brick is a package containing fifty bags of heroin. In total, the heroin seized alone has an estimated street value of more than $150,000.

To date, 41 of the 52 defendants charged have been taken in custody. All of the defendants arrested were remanded to the Monmouth County Correctional Institution in lieu of bail, set by the Honorable Lawrence M. Lawson, A.J.S.C. Bails continue to be set by Judge Lawson throughout the day as defendants appear in court.

The primary heroin suppliers for the above-mentioned defendants were Hassain Jenkins, 39, of Orange, Roger Barber, 40, of Newark, and Louis Pennington, a/k/a “Gangsta,” 29, of Long Branch. Daniels and other members of the Fruit Town Brims gang arranged for the repeated purchase and transport of large quantities of heroin from Essex County and, once received, the product was sold to a number of buyers throughout the area. As set forth in the attached chart, buyers charged as part of the operation resided in several locations throughout Monmouth and Ocean Counties, including towns such as Oceanport, West Long Branch, Rumson, Eatontown, Red Bank, Bayville, Little Silver and Sea Bright.

During the course of this investigation, law enforcement officers developed information that led to seizures of significant amounts of heroin, cash and firearms from members of this criminal enterprise. For example, on November 19, law enforcement officers recovered approximately 100 bricks of heroin from an automobile in Eatontown during a routine vehicle stop. On December 13, law enforcement officers stopped Jenkins and Barber on the eastbound side of Route 36 in Tinton Falls. During that stop, officers recovered two packages, each containing 100 bricks (5,000 bags) of heroin. As a result, both Jenkins and Barber were charged with narcotics-related offenses and remain incarcerated at the Monmouth County Correctional Institution in lieu of bail.

Similarly, on December 13, officers executed a search warrant at 245 Atlantic Avenue, Apartment 219 in Long Branch. While executing the warrant, officers recovered approximately 130 bricks (6,500 bags) of heroin and approximately $10,000 in cash. The estimated value of the heroin recovered is $130,000. Three individuals at the residence – Michael Marshall, 62 of Long Branch, Tau Kamau, a/k/a “Kevin Smith,” 40, of Long Branch, and Ronald Daniels, Sr., 42, of Long Branch – were charged with narcotics-related offenses and also remain incarcerated at the Monmouth County Correctional Institution in lieu of bail. Searches simultaneously executed on December 17 at 1401 Rustic Drive, Apt. 13 in Ocean Township, and 22 Fourth Street in Highlands, resulted in the seizure of additional quantities of narcotics, firearms and cash.

Notwithstanding these arrests, the investigation into the criminal activities of this criminal enterprise remains active and is continuing. Members of the public with information regarding criminal activity by any of those individuals arrested should contact Captain Albert DeAngelis of the Monmouth County Prosecutor’s Office via the radio room at 1-800-533-7443. Photographs of the individuals arrested are attached to this news release to assist members of the public in ascertaining whether they possess information regarding these individuals’ activities.

The charges brought as a result of Operation Hats Off carry the following sentences:

Despite these charges, every defendant is presumed innocent, unless and until found guilty beyond a reasonable doubt, following a trial at which the defendant has all of the trial rights guaranteed by the United States Constitution and State law.

This case is being prosecuted by Assistant Prosecutor Christopher Matthews of the Office’s Narcotics and Criminal Enterprises Division.