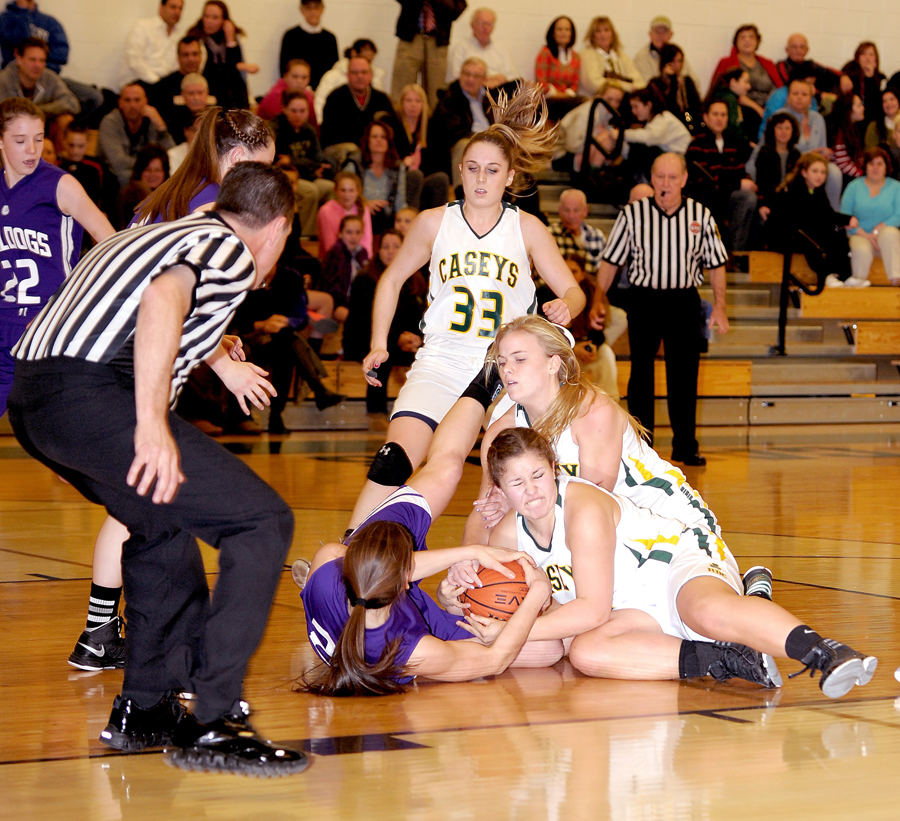 Jack Flaherty photo Red Bank Catholic guard Alexandra Barazotti takes to the floor for procession of the ball with a Rumson player along with Quinn McMenamen and Alexandra Alfano (standing) looking for a pass.

By Jim Hintelmann
Red Bank — A week ago, Red Bank Catholic’s girls basketball team dropped its first game of the season to Staten Island power Moore Catholic but, based on the results of its next two games, there hasn’t been any ill effects as RBC (17-1) followed up on its loss with A Central wins over Holmdel (47-37) and Rumson-Fair Have Regional (49-34). 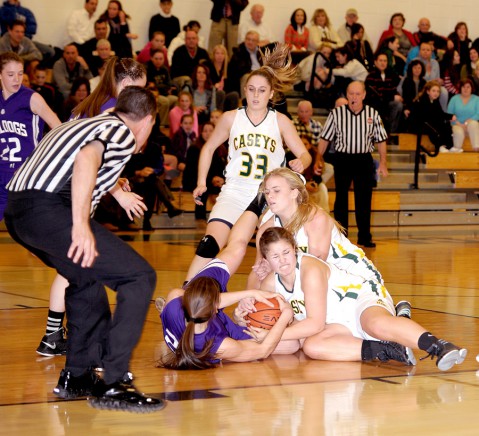 Jack Flaherty photo Red Bank Catholic guard Alexandra Barazotti takes to the floor for procession of the ball with a Rumson player along with Quinn McMenamen and Alexandra Alfano (standing) looking for a pass.

The win over Rumson on Thursday enabled RBC to clinch its first division championship since 2007 and the Caseys will be the team to beat in the upcoming Shore Conference Tournament.
“No one likes to lose,” said RBC senior Alex Alfano, “but we took something positive out of that game. It showed us so much how it feels like winning.. “It (winning the division) feels great and all of the hard work we put in paid off.”
Although winning by 15 points, RBC did not have an easy game until the final minutes when it broke a 34-34 tie by scoring the last 15 points of the game.
RBC had built up 28-14 lead just before the end of the first half and appeared to be in control , but Rumson rallied in the third quarter, holding the Caseys to just one point and finally tying it up at 29 on a jumper by Jess Harvey. 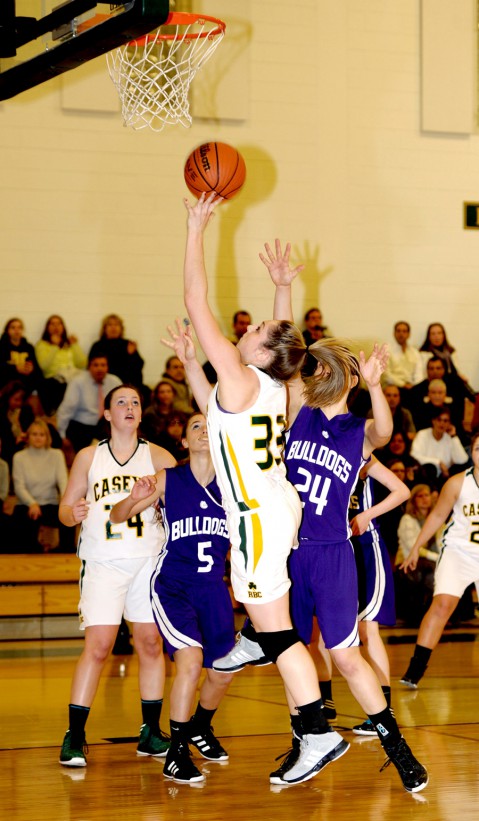 “We always seem to have trouble in the third quarter this year,” said RBC senior Mary Kate Caverly. “But Rumson is a tough team with good skill players. However, we came together and regrouped.
“This is the greatest feeling in the world,” Caverly added. “Nobody expected us to do this well because this is such a difficult division and we all worked very hard.” The game was tied twice more, the last time at 34 on a three-pointer by Rumson’s Grace Stant with five minutes remaining, but RBC tightened its defense and shut out the Bulldogs the rest of the way.
Offensively, the Caseys found their scoring touch and ran off the final 15 points of the game. Alex Barrazotti  started it off with a trey and Alfano added a jumper. Barrazotti scored on a three-point play and Caroline Corcoran scored the next five points Caverly closed it out with two foul shots.
“Rumson played real well in the third quarter,” said RBC coach Joe Montano. “But I’m proud of the way the kids kept their composure. Winning the title was satisfying because of the toughness of our division.”
By Walter J. O’Neill, Jr.
It was a text book win for the girls of Shore Regional as they defeated Lacey last week 53-48 in a nondivisional Shore Conference basketball game.
“This was a really good win for us coming off the Monmouth Regional loss,” said David Dudzinski, head coach of the Blue Devils.
Shore and Monmouth both play in the Class A Central division of the Shore Conference and are not in contention for the title. Of the eight teams in that division, the Devils and Falcons are at the rear of the pack.
Lacey, which plays in the Class A South division, was in West Long Branch on February 1, to face the Blue Devils. Lacey is in a similar spot as Shore Regional as far as position within the division, both are just one up from the bottom.
The first quarter was tight as both schools scored 13 points. It was the second quarter where Shore Regional took control and command of the game. They outscored Lacey 19-5 to close out the first half. “The girls played really hard from start to finish,” said Dudzinski.
During the second half, Lacey outscored the Blue Devils 30-21, but didn’t have enough in the tank to overcome the strong Shore Regional second quarter performance. “We played well enough to come away with a victory. Gina Ruscil led the scoring with 13 points, five assists and five steals,” said Dubzinski.
Shore Regional hit six shots from the three-point area. Ruscil is one of the leaders in the Shore Conference with a total of 27 three-point buckets. Emily Reiser finished with 12 points, six rebounds and three assists. Teammates Ciara Boice had 12 points, five steals and rebounds, and three assists, Emily Olsen scored seven points, pulled down five rebounds and had three assists, while Erika Ruscil had six points and four rebounds. “Playing larger schools will only make us a better team. We continue to learn from our mistakes,” said Dubzinski.
With the win the Blue Devils improve to 7-10 on the season.