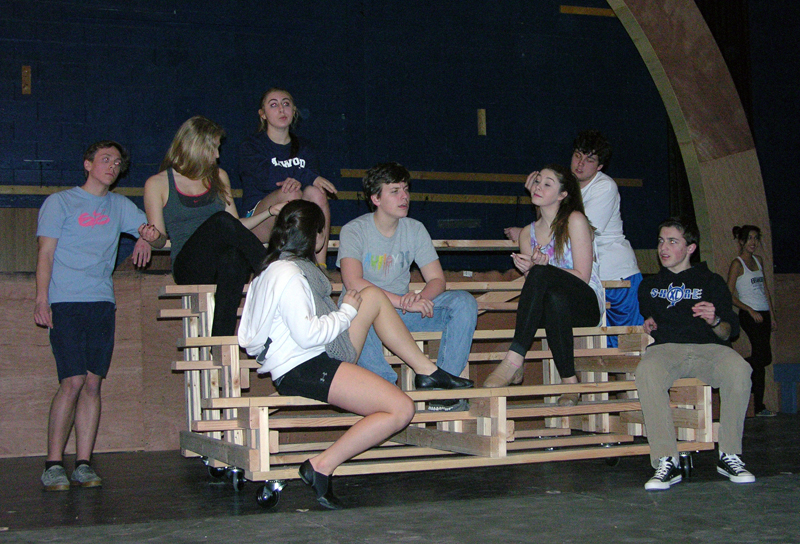 The Shore Players rehearse the choreography to “Magic Changes,” one of the many well known hits in Grease!, to be performed at Shore Regional High School.

By Neil Schulman
West Long Branch — From March 7-17, the Shore Players will present the musical Grease! at Shore Regional High School.
Since it was first performed in the early 1970s, Grease! has become a cult phenomenon. This story of teenagers in Rydell High School in the 1950s ran on Broadway (and other major venues) for years, and sparked the hit movie starring John Travolta and Oliva Newton-John.
Todd Aikens, who is directing the show, says that part of the reason it is so popular is because it captures a period in time so well. 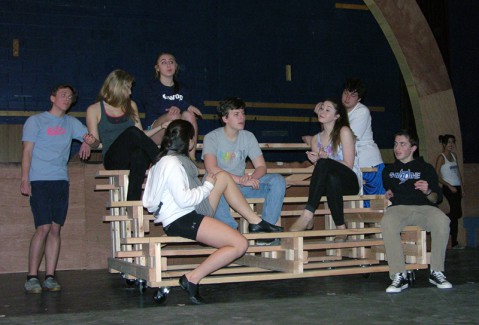 The Shore Players rehearse the choreography to “Magic Changes,” one of the many well known hits in Grease!, to be performed at Shore Regional High School.

“It’ll always play, because it catches that era,” he said.
It’s also a great play for a high school, he says. Not only does it have an ensemble cast, giving many a chance to shine, but the characters are all teenagers, easy for the actors to relate to.
“You’re teenagers playing teenagers, so you have fun with it,” he said.
They’re also easy for the director and others who are putting it together to relate to. Aikens has a long history with Grease! He toured nationally for two years as Vince Fontaine, the fast talking disc jockey. And he was a major part of Shore’s first production of Grease back in 2000.
Musical director Marcy Manfredi was actually cast as a swing in the original Broadway production of Grease!, and has several other Broadway credits to her name. Choreographer Tara Eccles has been involved in two different productions of the show with Phoenix Productions in Red Bank. And Assistant Director Jay Giberson made his stage debut here at Shore Regional 13 years ago, in the high school’s original production of the show.
The students are also having a ball. Senior Melissa Granet, who plays Marty, will be appearing in her first production.,
“I love being part of it. It’s like we’re a family,” she said.
“There’s so much behind it. The costumes are so fun, and the songs are so bubbly,” she said. “The producers are awesome.”
A special sneak peak performance for seniors will be held on Thur., March 7, 7 p.m. Regular performances are March 8-17, Fridays and Saturdays at 8 p.m. and Sundays at 2 p.m.
People are advised to come early in order to participate in Vince Fontaine’s Pre-Show Dance Contest, and come in 1950s-style costumes. Prizes will be awarded to dance winners and those who come dressed up.
Advanced tickets are $12 adults, $10 students; all tickets are $13 at the door.
To reserve tickets, call 732-222-9300 x2550 or email shoreplayerstix@shoreregional.org.