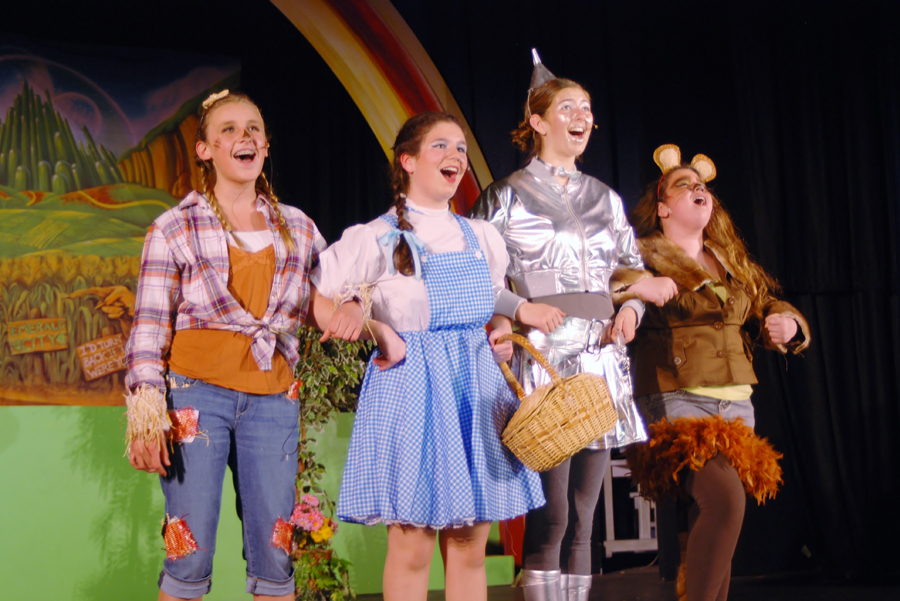 They are off to see the Wizard (l-r) Sarah Lang, Olivia Rescigno, Annie Ruoff & Elizabeth Witek

By Teja Anderson
Pink Beach Pass
This year the MB committee for Paint the Town Pink has decided to take a year off from the event due to the trials and tribulations of Sandy.

“With so many people not back in their homes and dealing with so many issues and with our local businesses not all back up and running yet, we thought it would be best to not do Pink Beach this year” committee member Monica Levy tells me, “Meridian Health has been just wonderful and understands completely and they are letting us stay on as an honorary town” she adds. For seven years now Paint the Town Pink has raised awareness of the importance of annual mammography across Monmouth County by getting surrounding towns awash in pink. This year 15 towns will be participating with MB and SB taking the year off. But if you still would like to be involved and show your support this May which is Breast Cancer Awareness month the theme this year is “Pink Your Ride” so if your pink goodies from years past weren’t stolen from your garage by Sandy feel free to decorate your car with pink items and washable pink paints. Luckily, my pink boas were in the attic and that faint pink line down Beach road is still discernible because my mother and many, many of my girlfriends are breast cancer survivors and I intend to be proud and pink! A special treat this year from Meridian; breast cancer survivor and TV personality Giuliana Rancic of E! News fame (and her own reality show) along with her husband Bill will be at the Algonquin Arts Theatre in Manasquan, Saturday, May 4, 2013 at 8:30 PM to share her inspirational story. The VIP Pink Carpet Event starts at 7PM for more information or to purchase tickets, call 1-855-PINK411.
Wizard of Oz

They are off to see the Wizard (l-r) Sarah Lang, Olivia Rescigno, Annie Ruoff & Elizabeth Witek


Our delightful MB 6-8th grade thespians amazed their families and friends with two sold out performances of the stage version of Frank L. Baum’s classic tale last weekend at Shore Regional HS. Under the skillful direction of Sean Openshaw and Billy Cardone and the tireless efforts of teacher Meaghan Jones with support from Erin Deininger, the cast led by Olivia Rescigno (Dorothy) dazzled, Kathryn Rossi (Wicked Witch) won over, Sarah Lang (Scarecrow) sparkled, Annie Ruoff (Tin Man) twinkled, Elizabeth Witek (Lion) lit up, Devon McDonough (Glinda) glimmered, Troy Maher (Auntie Em) amused Anthony Nannarello (the Wizard) wowed so much so that it was impossible to tell which young star shone the brightest! In fact, the whole cast and crew put on an awesome and highly entertaining show. Although I was momentarily confused by the updated musical score; I loved Elizabeth Witek as the Cowardly Lion singing “Born to be Wild”, and the graceful Sarina Redaelli as the dancing evil red poppy (drugs are bad!), I was relieved however that they kept Baum’s classic lines like; “Some people without brains do an awful lot of talking, don’t you think?”, “Toto I have a feeling we aren’t in Kansas anymore” and “Pay no attention to the man behind the curtain!” and when Dorothy said; “There is no place like home!” I couldn’t have agreed more; here’s hoping all of you are back in your own homes too very, very soon.
Photo #1 They are off to see the Wizard (l-r) Sarah Lang, Olivia Rescigno, Annie Ruoff & Elizabeth Witek
Photo#2 Witches and Wizards (l-r) Devon McDonough, Anthony Nannarello & Kathryn Rossi
Photos #3 Dorothy and Glinda are entertained by the Munchkins

*LOSAP is an incentive program for any of the MB First Aid responders who log a certain number of hours to be rewarded with $1,000 each year they qualify to go into an IRA account for them. Currently there are 16 members and they are looking to recruit more from out of town to help cover calls. In addition to the new ordinance passed tonight which gives each volunteer member a free beach and pool badge for the MBBP this summer, the members present at the meeting requested the town also extend resident privileges and prices to out of town First Aider’s families. The request is being considered and if you know of anyone who is a skilled and dedicated First Aid Volunteer, enjoys the beach and would like to join the MB Squad, please contact Steve Adams at 732-859-2671.

MB Library
“What goes around comes around . . . What’s old is new again . . . and the library is falling into step. It may not be up on the cherished balcony, you may not be taking a nostalgic walk up the stairway, but Borough Hall is home to the library once again!” They are tucked into a corner of the Great Room at Borough Hall,and are making themselves at home thanks to the graciousness of fellow borough employees. So please visit the “library” soon! Monday – Thursday, 1 pm- 4:30 pm for now, the library is not computerized, they are doing things the old fashioned way. Currently they have 170 new books and best sellers on the shelves waiting for their faithful patrons to “peruse and choose”. They will be expanding their book, DVD, and audio book collections as the spring and summer progress. Patrons, who request material from the county catalog on-line system, may pick up and return their selections to borough hall as well since the library has regular deliveries from the county. Miss Anne is looking forward to reading with the children at the bathing pavilion this summer, and is busy selecting some entertaining beach reads for everyone.

Ode to a Crane
I have already risked my marriage in this column before as my husband is Greek and can be a tad jealous, by admitting to my passion for cranes and other large machines. But when Nessie, the yellow Grove RT 700E Crane owned by Tarheel Enterprises at the Channel Club Marina slowly tipped over and partially fell off the pier while installing pilings on Dock A last Wednesday I was in tears and Frank let me run out of the house without question while the news helicopters circled overhead like vultures. Fortunately no one was hurt although several people were working on the dock at the time and one actually ended up in the water. The driver said that it happened very slowly so he had time to brace himself and then climb out once he was upside down. The crane which I personally nicknamed “Nessie” as I name all my favorite metal friends (Ziggy my former yellow VW bug, and Dory, my current blue VW bug) has a maximum capacity of 55 tons but somehow became unbalanced during the extensive repairs and upgrades her owner George Chrysanthopoulos has been making to the Marina in Sandy’s aftermath. I worry that he might be working her too hard while he prepares for the upcoming boating season; they are certainly going full steam ahead over there with150 new slips made out of Brazilian walnut and now all floating, all new electric, pedestals, gas station, hiring dive teams to comb the basin for debris, cleaning and refurbishing the Channel Club Banquet Hall itself with new everything and not a single whiff of Sandy’s perfume in the place as they ready for brides and party guest.