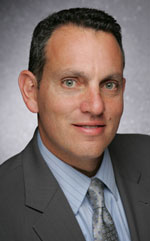 Oceanport resident Michael O'Neill was named as the new President & CEO of BMI on September 6, 2013.

(New York, NY – September 6, 2013) – Broadcast Music, Inc. (BMI), a global leader in music rights management, today announced that the Board of Directors has unanimously elected Michael O’Neill as Chief Executive Officer effective September 16, 2013. O’Neill will also become a member of the Board. O’Neill succeeds BMI’s current President and CEO Del Bryant who announced his desire to step down earlier this year after almost 42 years of continuous service to the company. O’Neill will assume the title of President upon Bryant’s retirement in June 2014.

Oceanport resident Michael O'Neill was named as the new President & CEO of BMI on September 6, 2013.

“After a thorough and deliberate selection process, the Board of Directors is delighted that Michael will lead BMI as we navigate through the evolving and expanding landscape of music rights,” said Susan Davenport Austin, Chairman of the Board of Directors. “Michael has a thorough understanding of the needs of our songwriters, our publishers and of our licensees who utilize the BMI repertoire. I have no doubt that he is the right person to take the helm at BMI as BMI enters its 75th year.”

“Whether listening to a cut or cutting a deal, Mike brings an A+ game comprised of affability, experience, innovation, and the desire to do what’s right for all our constituents,” said Del Bryant, current President and CEO. “I have always believed in him so it was no surprise that a world-wide search confirmed his talents. I am so happy for him, his family, and for BMI. I look forward to working with him in this new capacity over the next year on behalf of the company I love.”

O’Neill has served BMI for nearly 20 years, most recently as Senior Vice President Repertoire & Licensing, where he oversaw all aspects of BMI’s writer, composer and publisher relations, domestic licensing and revenue generation including radio, television, cable, satellite and the General Licensing division, and managed royalty distributions and administrative services groups.

“I am honored that the BMI Board of Directors chose me to follow in the footsteps of two truly iconic CEOs who have led BMI for the past 28 years – Frances Preston and Del Bryant,” said Michael O’Neill. “I am also thrilled that I will have the ability to rely on Del’s counsel over the coming year as he is an exceptional executive, leader, role model and friend.”

O’Neill led BMI’s licensing negotiations, developed new licenses and sales policies, spearheaded a new customer relations campaign, and played a key role in contributing to BMI’s explosive revenue growth over the past 20 years. He was instrumental in launching new royalty distributions including developing the ground breaking BMI Live program which pays performing songwriters for live performances in small venues and bars. He has also overseen the exponential growth in signing up over 40,000 new affiliated songwriters, composers and publishers each year over the past four years.

He holds an MBA from Rutgers University in Marketing and Finance and received his undergraduate degree in Business Administration from Montclair University.

Broadcast Music Inc. (BMI)
Broadcast Music Inc. (BMI) is a global leader in music rights management, serving as an advocate for the value of music. BMI represents the public performance rights in more than 7.5 million musical works created and owned by more than 600,000 songwriters, composers, and music publishers. The Company negotiates music license agreements and distributes the fees it generates as royalties to its affiliated writers and publishers when their songs are performed in public. In 1939, BMI created a groundbreaking open-door policy becoming the only performing rights organization to welcome and represent the creators of blues, jazz, country, and American roots music. Today, the musical compositions in BMI’s repertoire, from chart toppers to perennial favorites span all genres of music and are consistently among the most-performed hits of the year. For additional information and the latest BMI news, visit bmi.com, follow us on Twitter @BMI or stay connected through Broadcast Music Inc. (BMI) Facebook page.