‘You are too young to remember, but never forget’ 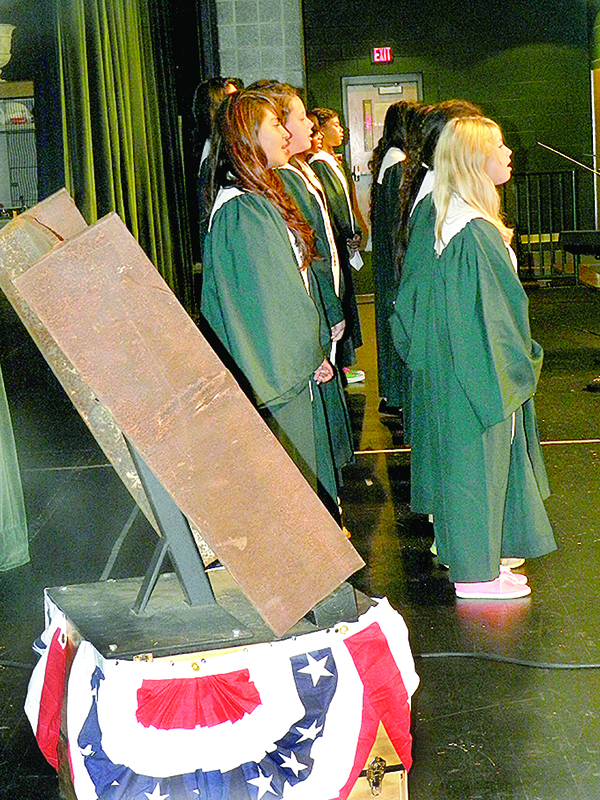 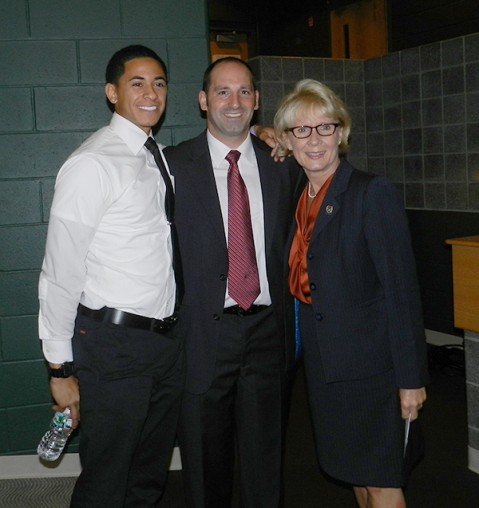 By Patty Booth O’Neill
Long Branch — The first thing you notice on the stage in the Long Branch High School auditorium is a large chunk of a steel beam that came out of the World Trade Center. The beam was donated to Long Branch after the events of September 11, 2001. 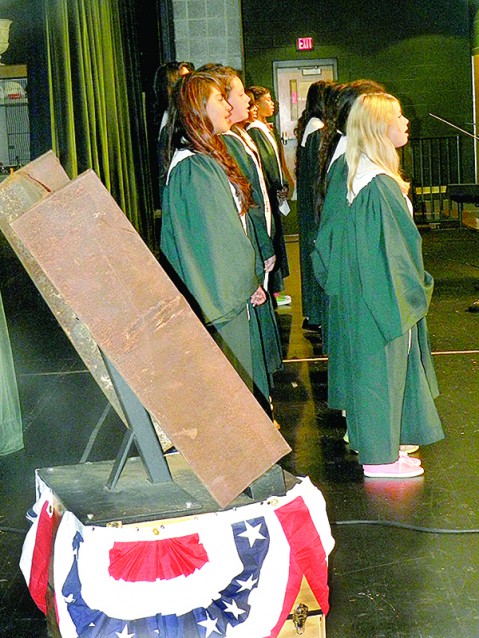 A steady stream of students, teachers, administrators and guests  filed into the auditorium on Wednesday afternoon to patriotic music played by the High School Band. Special guests and speakers had seats reserved for them in the front row and watched as the program began.
The Long Branch High School Junior Air Force ROTC performed the presentation of colors and followed with an impressive ritual of folding the flag.
The flag salute was led by high school student Melvin Ramos, and then student Reanna Runge sang the National Anthem, and student David Brown led the crowd in  opening prayer.
Superintendent Michael Salvatore opened by telling everyone that “I am making today an educational day.” He introduced the speakers and after each one spoke he gave students 60 seconds to reflect on what the speaker was trying to get across.
“We are reminded that what took years to build can be destroyed in minutes or seconds,” said Michele Critelli, Long Branch Board of Education member. “And even one act of unforgettable evil can forever change the way that we live.”
She said that many of the children in the auditorium were very young when the terrible events of September 11, took place. “For you the experience of 9-11 might be quite different, as an adult who experience 9-11, I can tell you that the attack brought America together in a way that I never truly experienced,” said Critelli. “In a moment whatever difference existed between people dissolved and were rendered trivial as to what we all had in common as fundamental compassion and concern for the wellbeing of others.”
“Now you all have sixty seconds to discuss what you got out of what you just heard,” said Salvatore. And the auditorium instantly came alive with a din of conversation as students discussed what Critelli had to say. “Five, four three, two, one,” Salvatore counted down, and the chatter came to a halt. “Okay, who wants to tell me what they heard?” Middle school student Kyle Smith stood up in the very last row and walked down the center aisle. “What I heard was unity. We must stay united,” he said, and everyone applauded.
“If you think about death and the tragedy of 9-11 you get bogged down,” said Assemblywoman Mary Pat Angelini. She said that it is important to reach out to your neighbor. “Many ordinary people going about their ordinary lives became extraordinary people. We can look to the positive in our country,” she said.
After sixty seconds of discussion high school student Ronny Murray said that what he got out of Angelini’s talk. “In a time of crises everyone comes together because whatever happens we are all one.”
What struck student Victoria Villanueva was, “ordinary to extraordinary.”
Monmouth County Superintendent Joe Passiment told the students how he was stuck in Italy at the time. He was able to get some information from BBC News, but had no idea what happened locally. “I didn’t know what happened to my family, my loved ones,” he said.
He told the students how proud they should be of their uniforms. “Everyone wears uniforms, it’s just a matter of what type. I’m wearing a uniform now,” he said. “Every time I come to this school I can’t be prouder of what you are and what you stand for,” he told the students.
Mike Salvatore closed the assembly by telling students, “Dare to Dream.” He told a story about how he saw a video of little kids being asked what 9-11 was and said he was appalled that not one knew. “I’m not going to ask you to remember, you were much too young. I am going to ask you to take information from today. Go back to your classrooms and learn about it. Then take that information and form an opinion,” he said.﻿