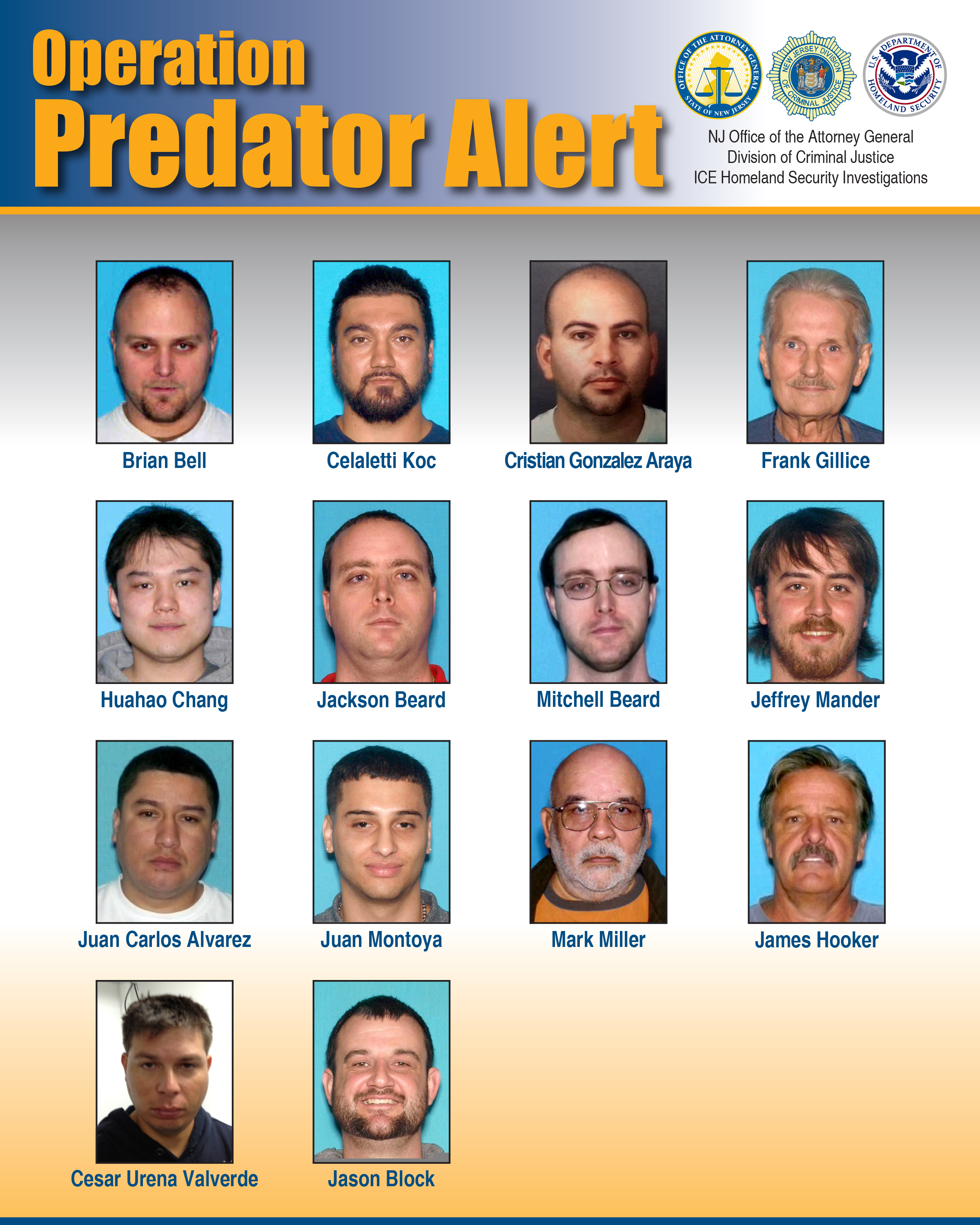 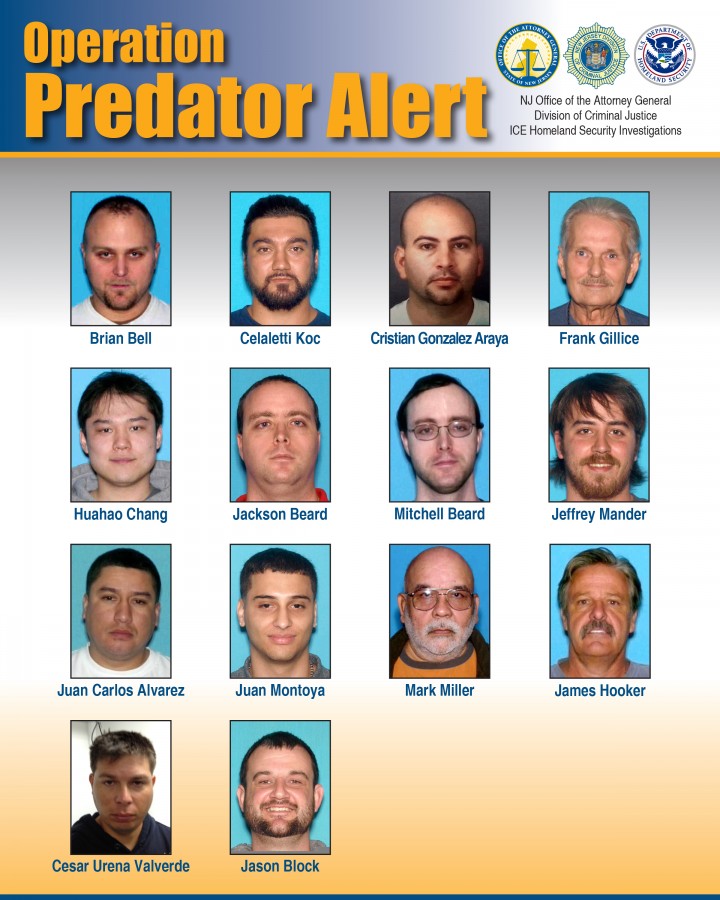 TRENTON – Acting Attorney General John J. Hoffman today announced that 14 men have been arrested in an operation that targeted offenders in New Jersey who used a file-sharing network to download and distribute child pornography, including child rape videos, on the Internet.

“Armed with New Jersey’s tough new child pornography law, we are coming down hard on offenders who, by sharing these vile materials, support and encourage the sexual predators who rape and abuse children to create them,” said Acting Attorney General Hoffman. “The claim that viewing child pornography online is a victimless crime is yet another affront to the victims whose images and cries can never be erased from the Internet. Each time we identify a viewer who has re-victimized children by taking perverse pleasure in their agony, we will seek justice for that crime.”

“By subjecting offenders to parole supervision for life under Megan’s Law, our new child pornography law recognizes that those who get sexual gratification from these abhorrent images pose a real danger to children,” said Director Elie Honig of the Division of Criminal Justice. “Operation Predator Alert is aptly named because we are sounding the alarm about deviants who troll the Internet for images of children being raped and tortured.”

“Child predators rob children of their youth and innocence. One child victimized by a pedophile is one too many,” said Andrew M. McLees, Special Agent in Charge of ICE Homeland Security Investigations in Newark. “This joint effort with the New Jersey Attorney General’s Division of Criminal Justice is a clear indication of HSI’s resolve to seek out those who sexually exploit innocent children.”

The file-sharing networks used by offenders to distribute child pornography operate in the same manner as websites used for privately sharing music or movies. Those in possession of the illegal images can make them available on computers that they control for others to download. Because many of these videos and photos of child pornography keep recirculating, they result in the perpetual re-victimization of the children who were sexually assaulted or abused to produce them.

Each of the arrested defendants allegedly was using Internet file-sharing software to make multiple files containing child pornography readily available for other users to download from a “shared folder” on his computer. Agents allegedly downloaded files containing child pornography from each defendant’s computer during the investigation. The files included videos showing pre-pubescent boys and girls being sexually penetrated or being coerced into performing sexual acts on themselves or others.

The Division of Criminal Justice obtained arrest and search warrants, which they executed with HSI beginning on Sept. 30. Numerous state, county and local law enforcement agencies assisted in executing the warrants. Those charged range in age from 24 to 66, and they come from all walks of life. For example, they include an engineer, a mail carrier, an auto mechanic, a master control operator for a local television network, a retiree, a supermarket customer service representative, and a fugitive wanted in Colorado on a charge of auto theft.

One man, Huahao “Howard” Chang, 30, of Somerset, was charged with possession of marijuana with intent to distribute, because marijuana and a digital scale were seized from his residence. He is charged with tampering with evidence for allegedly throwing a computer down a stairwell in an attempt to destroy the hard drive during his arrest on Sept. 30. Another man, Mitchell Beard, 32, of Lower Township, allegedly had an illegal assault rifle in his bedroom. Both he and his twin brother, Jackson Beard, 32, who lives at the same address, were arrested on child pornography charges.

The charges stemming from Operation Predator Alert will be prosecuted by the Division of Criminal Justice Financial & Computer Crimes Bureau, Computer Analysis and Technology Unit. As previously indicated, the defendants in Operation Predator Alert will be prosecuted under New Jersey’s new child pornography statute, signed into law by Governor Christie on Aug. 14. The new law increased the punishment for virtually all child pornography offenses and brought New Jersey law into much closer alignment with federal law.

Causing a child to engage in a prohibited sexual act for purposes of creating child pornography now is a first-degree crime for all persons, carrying a sentence of 10 to 20 years in state prison. Previously it was a first-degree crime only for parents or guardians of the child, and a second-degree crime for others. If convicted of that offense under the new law, an offender must serve 85 percent of the sentence without parole. No Predator Alert defendant is charged with that offense at this time, but the investigations are ongoing, including forensic examinations of computers and other evidence, including flash drives, memory cards, DVDs and cell phones, at the FBI’s Regional Computer Forensic Lab in Hamilton.

The agencies that participated in executing warrants in Operation Predator Alert with the New Jersey Division of Criminal Justice and ICE Homeland Security Investigations are:

The charges are merely accusations and the defendants are presumed innocent until proven guilty. Because the charges are indictable offenses, they will be presented to a state grand jury for potential indictment.