Those who served during Sandy honored

Antoon will be remembered forever in WLB 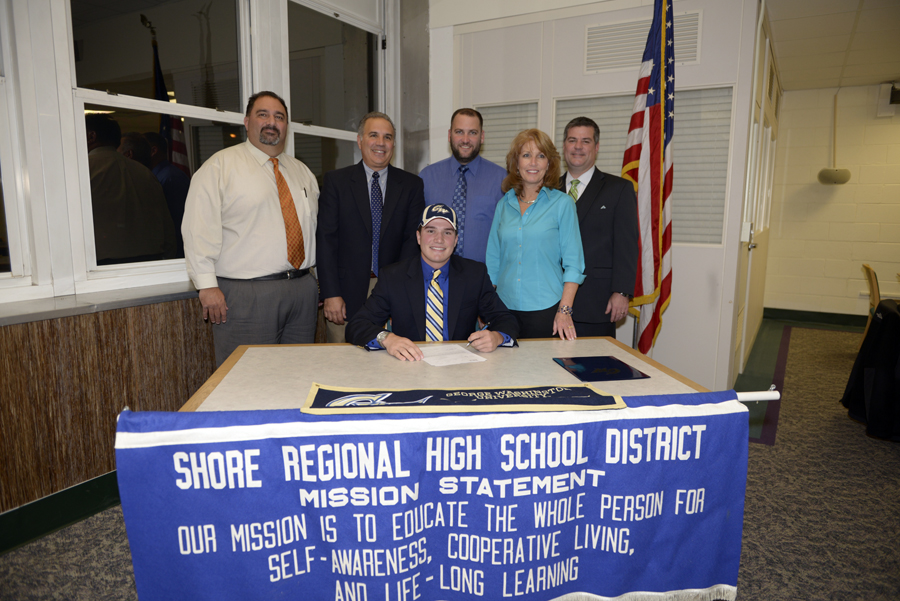 With the stroke of a pen Matt Cosentino inked his deal to attend George Washington University in the fall. A senior at Shore Regional High School he signed a letter of intent to accept a partial scholarship and play baseball for the Colonials during a brief ceremony before the board of education meeting on November 21, in the high school media center.

“Matt is a coach’s dream. He is the most competitive person I know and a great leader,” said Patrick O’Neill, head coach of the Blue Devils. Cosentino is a three year varsity letter winner and started since his freshman year. “He has a strong work ethic which makes him a great role model for the underclassmen.” 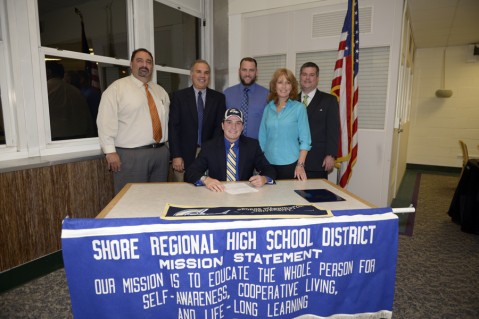 He plays outfield and also pitches, but when asked which he prefers, the answer was quick; “outfield.” As a sophomore he earned All Division A Central honors as an outfielder in 2012. Like many high school students he plays more than one sport and the last basketball game of his junior year, he fell and hurt his wrist which required an operation.

“For most of his junior year Matt was out with his injury. He only played in 13 games, four of which he pitched,” said O’Neill. Shore started the season last year horribly, but after Cosentino returned to the line-up the Blue Devils went on an 8-1 run. “He helped us reach the NJSIAA Central Jersey, Group I final last year.”

Even though he likes to play the field his biggest strength is at the plate. Cosentino is a hitter, considering he missed just about all of his junior year he has impressive numbers; 50 total hits, 10 doubles, 4 triples, 4 homeruns, 33 RBI’s, 38 runs, 33 stolen bases and a .420 batting average. “I pitch lefty but I bat from the right side,” said Cosentino. “It’s weird I never tried hitting from the left side.”

When asked why he decided on George Washington University, Cosentino said it was several reasons. “The campus was really nice and I liked the atmosphere when I was there. But what really sold me was Coach Gregg Ritchie,” said Cosentino.

Ritchie is graduate and former player at GW who went on to play professional ball. He is currently in his second year as head coach, before he joined the GW team he was the batting coach for the Pittsburgh Pirates. “He is a hitters coach, and I like hitting,” said a smiling Cosentino.

“I am very proud of Matt and his tremendous accomplishment in earning a baseball scholarship to George Washington University,” said O’Neill. “I am very excited to see what Matt can accomplish in his senior season.”