73 year old man charged with aggravated assault with a car 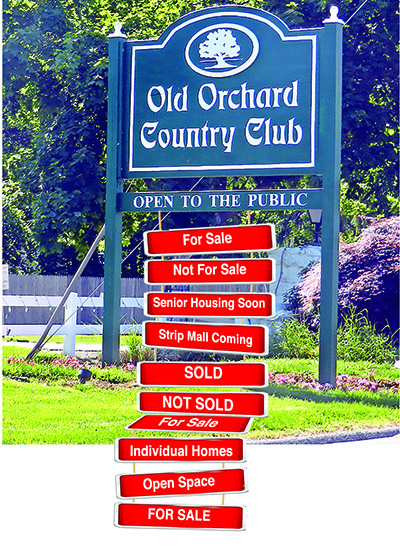 By Walter J. O’Neill, Jr.
Eatontown — The residents living near the Old Orchard Country Club on Monmouth Road who opposed the development of the property into a mixed commercial and residential use received an early holiday gift from the Planning Board Monday.

Members of the board voted 5-3 to reject an amendment to Eatontown’s Master Plan that would have allowed the developers of what is currently a golf course to build commercial uses along the 60 acres that front Highway 36 by keeping the remaining 75 acres that front the current residents as open space.

The area is currently zoned as R-32, which allows large residential dwellings. It questionable exactly how many units would fit in the zone, but it’s safe to say 95 to 108 homes could be built where the golf course is without variances.

The golf course, built in 1929 which has entertained players including Babe Ruth, has been up for sale for years.

Joseph Safdieh, a developer, attempted to build 700 residential units on the golf course back in 2009. His plan also called for a big commercial section. Strong opposition from the community resulted in that plan being shot down.

Gerald Tarantolo, Mayor of Eatontown, has been a very strong supporter of developing the golf course. In fact he has been the man behind the scenes pushing for subcommittees and studies on the property.

When the current developers, National Realty and Development Corp. subsidiary Eatontown Ventures, LLC, presented an application to the planning board earlier this year it was denied. That called for 175 age-restricted housing units in one part, and 450,000 square feet of commercial development along the highway.

Tarantolo then said a subcommittee should look to see if the Eatontown Master Plan should be revised. Again, a committee was put together and came back and said no. Eatontown is mandated to revise their Master Plan in 2017 by law.

Tarantolo then asked the planning board to vote on having a study conducted by Rich Crammer of T&M Associates. When the mayor was asked by two of the board members if the planning board had the money in its budget, Tarantolo responded, “money is there, I spoke to the CFO.” The board approved the vote for a study.

The Link News learned that Crammer had contacted the Borough Administrator to see if the money was transferred for the planning board study. At the time he called the money had not been not transferred and he had not submitted his study.

At the December 9 meeting it was still unclear how and when Crammer was going to get paid and how much his bill was going to be. The planning board and council are expected to pay up to $10,000 for the report, which upset many residents. One wanted to know why Eatontown should have to pay for a developer’s study.

The current plan submitted by Crammer agreed with the developer’s idea of changing the golf course’s zoning. The new proposal would be twice the size of the Home Depot Center in West Long Branch and the second largest development in Eatontown after Monmouth Mall.

When one of the planning board members questioned Crammer about his change in position, as in the past he was against large development on the site, he stated that a new law in August called “clustering” allowed for his change in views.
Clustering would allow for development along Highway 36, but would preserve the rest of the property as open space. If 75 of the 135 acres were preserved as open space, then the developers could build 350,000 square feet of commercial development on the remainder. If 90 acres were preserved, they could build 450,000 square feet on the remaining property.
Crammer’s letter was dated August 5; the law was enacted in late August according to Councilman Dennis Connelly.

“I questioned the report, the funding of the report and how much it is going to cost the taxpayers,” said Connelly.
It has been a contentious time for development in Eatontown, with Fort Monmouth closing and the lack of development at that site, combined with a seeming push for the development of the golf course.

Supporters of the proposed amendment said that it would keep development away from the neighbors on the northern half of the property, create more park space in the borough, and increase the tax ratables.

But opponents still had numerous concerns.
One of the biggest concerns is traffic. Highway 36 and Monmouth Road already have heavy traffic flow issues. Board members Mark Woloshin and Edmund Fitterer both voted against the amendment to the master plan and stated that they heard the concerns of the residents. Woloshin said that he found the idea of more open space attractive, but still had concerns about traffic and other issues.

Those that voted for the change were Tarantolo, Planning Board Chairman Carl Sohl and Michael Napolitan. People in the meeting room were chanting “dictator” towards Tarantolo.
“You can call me what you want, but I’m going to say what I have to say,” said Tarantolo. He then went on to talk about how the golf course has been losing money for the last five years and every time a redevelopment effort came forward it was crushed by public outcry.
Some residents have told The Link they believe that the golf course could be a viable business for the site.

A fire damaged its banquet kitchen several years ago and never repaired it, which means that the hall can’t be rented. Memberships went down as everyone knew the owners were going to sell. As one person said the owners had made up their minds after the fire that they wanted to sell and were not going to spend a penny to fix the place up; so how were they going to make any money.

“All I can say is that I’m glad that the Planning Board made the decision they did,” said Connelly. “Right now we need to focus on Fort Monmouth and to stick with our Master Plan. If the future dictates that we change the plan than that is something we will need to look at.”