Butterflies are gone for Mooney as Wave wins

Sterns Trailers Athlete of the Week 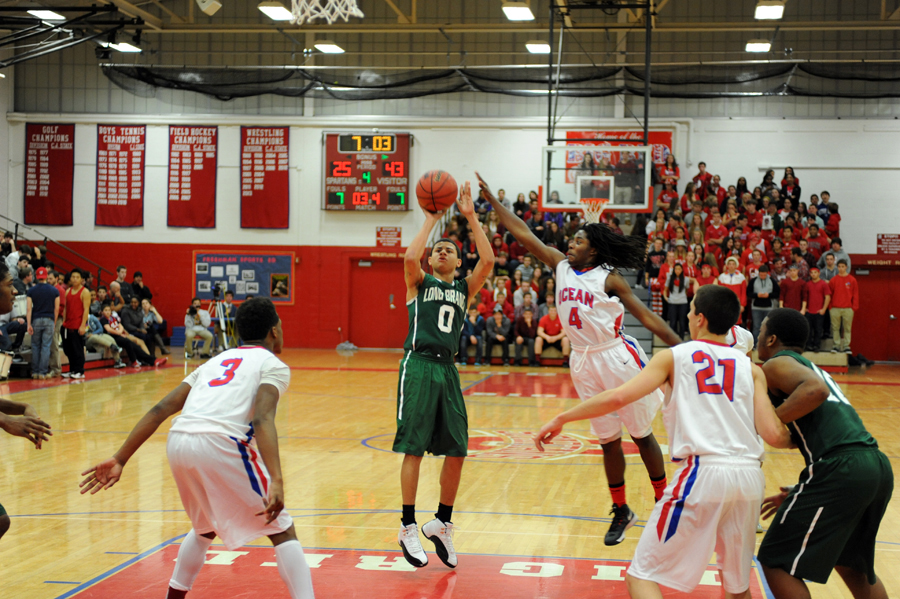 Edward Jones (0) of Long Branch goes up for a shot during the fourth of the game against Ocean Township.

Since 1989 he has been working in the shadows of his mentor and a Long Branch icon in the basketball community. Now for the first time in his career Stanley Mooney gets to have the title of head coach of the Green Wave boys’ team.

On Friday night the Green Wave traveled to Ocean Township High School where they played the Spartans to tip off the 2013-2014 Shore Conference season. Both schools playing in the highly competitive Class B North division. Long Branch received the preseason ranking of number six out of the top ten overall teams in the entire Shore Conference.

Edward Jones (0) of Long Branch goes up for a shot during the fourth of the game against Ocean Township.

Driving to the hoop is Izayah Irizarry (2) a senior guard at Long Branch and going for the block is Dean RuQuan (4) a sophomore guard at Ocean.

Floating to the hoop for Ocean is William Nicholson (1) a junior and attempting to block the shot for Long Branch is Hassan Foster (11) a senior forward.

He had only two points in the loss to Long Branch, but Lucas Snow (21) a senior guard had to work really hard to get past the aggressive Green Wave defense.

For the past 24 years Mooney has been studying and assisting Donald Covin, who resigned as head basketball coach after being elected to the Long Branch Board of Education in November. However, Covin has been appointed as a volunteer coach of the team, not receiving any payment from the Board of Education. “Stan makes all the decisions as to who made the team, who starts the game and when we need time outs and when to sub during the game,” said Covin. The former head coach stated that he will take on a supportive role and guiding role and is putting the finishing touches or polishing up Mooney for his future as a head coach. “During the game I will find it hard to sit in a chair, you will see me going up and down the bench directing our players. That is one of my roles as a volunteer and to assist Stan.”

“We have cohesiveness on the bench,” said Mooney. He also stated that he has tremendous respect for Covin and his knowledge of the game and ability to connect with the players. When asked what it was like coaching on Friday night with Covin walking back and forth he smiled. “I can’t see the game he is always pacing up and down the sideline blocking my view,” and then let out a big laugh.

When asked what players stood out for Long Branch Mooney was quick with his answer. “Terrel Cox. He had great defense and his shooting and balling handling was great,” said Mooney. He added that Hassan Foster, Izayah Irizarry also contributed above what he expected.

“We need to close the middle down more defensively,” said Mooney. The coach said that once they make that adjustment in practice the team will be alright. Overall he and Covin were very pleased with the overall performance.

Cox finished with 20 points, Irizarry had seven, Jamar and Hassan Foster each had six points as did Kenneth Barrow for Long Branch.

Ocean Township was out gunned in the first quarter as Long Branch took a 19-8 lead and then went into the halftime break up 34-17. The third quarter was the closest of the game as the Spartans only allowed Long Branch to score nine points while they put up seven. The final quarter of action had the Wave besting the Spartans 11-8. Long Branch never allowed Ocean to score double digits in any quarter of the game.

Leading scorer for Ocean was the center, Chris Seager, who was also the goalie on the soccer team. He had a team high 11 points. The next highest Spartan was RuQuan Dean with seven points.

To view more photos of this game please visit our LINK Sports Facebook page; www.facebook.com/thelinksports and LIKE the page!