Herculean efforts to save the mail and the mail carrier

It’s a boy for the Roebuck’s 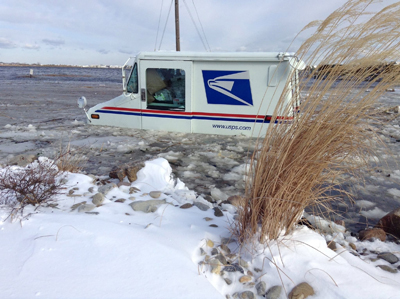 By Teja Anderson
Apparently the US Postal Service didn’t get the OEM warning about Storm Hercules that most of us in Monmouth Beach did. Or maybe it’s because the a new Postmaster Ben Winnie, who only took over the job a few days ago, didn’t suffer through Hurricane Sandy with us and didn’t have the wherewithal to warn his charges about just how bad certain streets in MB flood when the weather conditions get dicey.
The Coastal Flood Watch which was in effect from late Thursday evening through Friday forecasted “moderate” flooding and cautioned residents in flood-prone areas to take normal precautions including moving their vehicles to higher ground.

“Normal precautions” for MB and particularly my street, Monmouth Parkway, where “it floods on a good day” meant my car was parked safely up the street in a summer resident’s driveway and I had no intention of driving it anywhere until low tide at around 6 p.m. on Friday night.

Unfortunately, at precisely high tide on Friday morning (11:28 a.m.) Joe Sposito, a part time postal employee who lives in Middletown, drove down Shrewsbury Drive and attempted to round the corner at North Road right by the Shorelands/Pricilla Brower Park.

The problem was what looked like a snow covered road to him was actually chunks of ice floating on top of four feet of icy river water that covered the entire street and most of the park. Several moms out shoveling the snow from their driveways stared in disbelief as the young man drove the mail van headlong into the deepest part, one of them yelling for him to stop, but the windows of the mail truck were up since the temperatures were in the teens, so he didn’t hear them.

What followed next ended up on Eyewitness and national news. The young man, filling in for Charles Ziola, the regular letter carrier, realized too late that the road was badly flooded and by the time he braked he was already skidding and floating into the deepest part of the icy water.

Joe said he was terrified; he thought he was going to die as the van finally stopped in four feet of icy, swirling debris-filled water effectually trapping him. Shrewsbury Drive resident Carrie Tenuto, who witnessed the whole thing yelled to her husband Al to call 911.

Monmouth Beach police officers Peter Farmer and Eddie Junquet were there in minutes, but with no means to safely assist without getting hypothermia themselves, they watched powerlessly as the van appeared to tilt in the rushing waters as the man trapped inside frantically moved the mail in the truck away from the rising water.
“He was like a superhero,” Carrie marveled. “Before trying to get out he saved the mail. He thought about the mail first!”

We all know the motto; “Neither snow nor rain nor heat nor gloom of night stays these couriers from the swift completion of their appointed rounds” but seriously? That motto doesn’t say anything about icy flood waters either.
The first truck on the scene was Engine 25-4-75 from Long Branch, and their Water Rescue Team, headed by 1st Assistant Chief Kevin Stout, Lt. Jason Smuro and Firefighter Kenny Banach Jr. (his second day on the job) quickly donned their dry suits and headed to the partially submerged mail truck as the Monmouth Beach and Sea Bright Fire Companies arrived.

Command was swiftly established by the newly appointed MB 2nd Asst. Chief, Robert Pasquariello with MB Engine 3376, and he quickly had Engine 3387, the 2 1/2 ton water rescue truck, slowly back down Shrewsbury Drive.
The swimmers from Long Branch were able to help the postal worker remove his mail from the van and then assist him into the back of 3387. Once there, crews were able to bring the postal worker to dry ground where EMS personnel were waiting, but he refused medical attention.

A normal person might have taken the rest of the day off to count their blessings but this young hero Joe, instead drove to Kmart to buy dry boots and sweatpants (generously paid for by postmaster Winnie) and then rushed right back to MB to finish his route in his own yellow jeep!

When he handed me my completely dry mail barely an hour later his hands were a little shaky but if it was from the cold or the experience I still don’t know.

“I thought I was going to drown,” he told me excitedly. “The water was coming in the truck fast so I started moving the mail. People have their medications and checks and important stuff, I was so worried.”

Hopefully the USPS will take all this into account when they mourn the loss of their vehicle, which was towed away by 2 p.m. before all the news trucks arrived and put the story and our little town on all over the country!

Incredibly this wasn’t the only watery rescue of the day in MB; just as the Joe Sposito was being brought to safety, The Monmouth County Radio Room notified Chief Pasquariello of a second vehicle that was stuck in icy flood waters in MB. This one was on Sailors Way and River Road.

Apparently, two gentlemen had been in the MB area assisting residents with snow removal after Storm Hercules and were unfamiliar with the various streets notoriety for flooding. After helping shovel a driveway on Sailors Way they headed up the street and tried to make the left turn on to River Road. They did not realize how badly the street was flooded and their black Chevy Blazer stalled in water.

Unable to open their doors without letting water in to the car, both men climbed out their window and onto the roof where they began yelling for help.

As luck would have it, Anita Macaluso was home in her upstairs office at 8 Sailors Way and looked out her window to see the driver of the vehicle Charles Miller in the water past his knees wading towards their house. She watched in disbelief as he stumbled and fell up to his neck in the frigid, choppy water. Anita called to her husband Tim and the two of them met Miller at their front door, ushering him in.

“He was freezing, his clothes were soaked” Anita recalls, “I think he was probably in shock because he didn’t say much, he just started taking his clothes off right there by the front door.”

Anita led him to the bathroom and he handed her everything but his underwear to put in the drier.” “His clothes were completely drenched and he was a big guy, we had nothing that would fit him but some fuzzy socks so I got him those and a big comforter to wrap himself in.”

While Anita’s daughter Lily (6) helped  her mother cart Mr. Miller’s clothing to the drier, Tim called 911 and let them know they had a victim of flooding in their home who they were afraid might have hypothermia.
The crew from 3387, consisting of both MB & LB fire fighters, proceeded to this call, along with Chief Pasquariello, and the entire EMS crew still in truck 3357 consisting of new Captain Nichols Berse, Sue McDonald, James Dolan, Dave Gallagher, and Cynthia Esposito.

They located the SUV in at least four feet of icy water with the male passenger still on the roof. 3387 was able to pull alongside of the vehicle and the LB Fire Company Water Rescue Team was once again able to assist the LB resident off the roof and into the back of the MB Aquatic apparatus.

The man, in his 30s informed his rescuers that Miller had already self-extricated himself through the window and made it through the flood waters to the Macaluso home. The crews from 3387 entered the Macaluso’s home about 10-15 minutes after Miller’s arrival to find him wrapped up and having hot tea but still in shock and trembling. They were able to coax him into a red life vest, retrieve his still wet clothes from the drier which Anita gave them in a garbage bag to accompany him to the hospital, and they walked with Miller to the MB Aquatic apparatus wrapped in Anita’s huge white down comforter.

Truck 3387 then backed up Seaview Ave and crews were able to turn over both victims to the waiting EMS team. It was again very luck that EMS had brought the old EMS truck and not the new one as it is a few inches higher off the ground; not helpful when backing into the ER platform at Monmouth Medical Center, but very helpful when negotiating the flooded streets of MB.

Although his friend and passenger refused medical attention, Miller was evaluated, wrapped in foil blankets (the ones used for marathon runners), the heat in the EMS truck was cranked to the max and he was transported to Monmouth Medical Center and happily released in less than an hour.
Here’s hoping we see less excitement for our heroic Fire, Police and EMS teams and more of our heroic letter carrier and MB residents.

After the USPS worker was rescued the team had to go rescue an SUV stuck in icy flood water at the corner of Sailor Way and River Rd in MB. There was a person sitting on top of the vehicle who was safely removed.

Newly appointed MB 2nd Asst. Chief, Robert Pasquariello (with wife Jenna and daughter) has had a busy start to 2014!

Although it looks like a snow covered street, I am standing in knee deep water to take this shot of the truck.

The sea grass-filled USPS truck about to be towed as the tide recedes.

The view across Shorelands/Pricilla Brower Park towards the corner of North & Shrewsbury where the mail truck is stalled.