NJ anti-human trafficking efforts ahead of the Super Bowl 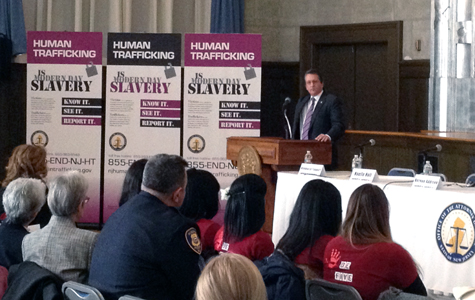 Victims of human trafficking, men, women and children, can be exploited for the purpose of commercial sexual activity, including prostitution and pornography, as well as many types of forced labor, including domestic servitude and migrant agricultural work. Traffickers lure and control their victims through the use of force, fraud, or coercion, and employ techniques such as physical and psychological abuse, false employment offers, document holding, and isolation.

“Human trafficking is a deplorable crime that strips its victims of their most basic right – their freedom,” Acting Attorney General John J. Hoffman said. “We, as law enforcement and as human beings, have an obligation to make sure that we do everything in our power to stop this atrocity. Through a multi-faceted community outreach campaign, we continue to actively educate the public about the dangers of human trafficking, what it is, how to spot it and how to report it. In addition, we have committed significant resources to investigating and prosecuting human trafficking.”

“Combatting human trafficking effectively takes the increased awareness of every citizen across the State and the strength and will of our collective efforts, said DCF Commissioner Allison Blake. “Today’s awareness event is only one of many efforts to win the battle against human trafficking and protect and support the victims and their families.”

“It is unconscionable that unscrupulous criminals continue to prey on other human beings and exploit them in horrifying ways, including forced labor and prostitution, just to make a dollar,” U.S. Attorney Paul J. Fishman said. “These victims are forced to endure the violation of their most basic human and civil rights. This type of behavior is intolerable in a civilized society.”

“It remains critical that we continue our vigorous fight against human trafficking so that we can give a voice to the victims who have their innocence stolen, and also remind the predators that engage in this reprehensible conduct that they will be severely punished,” Chiesa said.

To date, the Human Trafficking Task Force has trained thousands of law enforcement members and people from other walks of life, including hospitality management and staff, taxi cab drivers, CEOs, university presidents, health care industry executives and people working in a broad array of other vocations. As part of its outreach efforts, the Human Trafficking Task Force will continue to hold “say something assemblies,” which educate students and the community at large about the dangers of human trafficking, how to spot it and how to report it. More information about those assemblies can be found at www.njhumantrafficking.gov.

In addition, the Human Trafficking Task Force has launched a multi-media campaign to raise awareness of this type of modern-day slavery. Billboards, radio and newspaper ads, and place mats in diners are several ways that the Task Force is getting out its message. In addition, each of the 21 counties has its two liaisons – an Assistant Prosecutor and an Investigator – who conduct outreach in their own counties.

Earlier this month, a public service announcement, which tells of one woman’s struggles to break free of human trafficking, was produced ahead of the 2014 Super Bowl and will begin airing shortly on cable television networks. The PSA can be viewedwww.njhumantrafficking.gov.