‘No excuse for city snow job’ in Long Branch 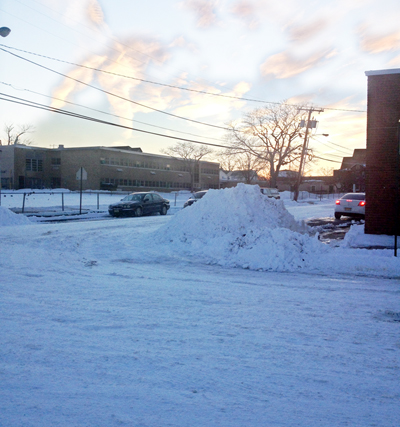 Memorial Pkwy had mounds of snow plowed up to the corner of Memorial and 'Garfield. But even though the pile of snow is pretty high, Memorial and Garfield are still packed down with snow.

Memorial Pkwy had mounds of snow plowed up to the corner of Memorial and 'Garfield. But even though the pile of snow is pretty high on Friday, Memorial and Garfield are still packed down with snow.

By Patty Booth O’Neill
People in Long Branch are not happy with the way the streets were plowed after the recent storm where over a foot of snow fell on some parts of the area.

“I agree with them,” said Long Branch Mayor Adam Schneider. “Somewhere along the line, someone dropped the ball.”

Schneider said that for some reason no salt or sand was put down, and no scraping was done, and overtime was kept at a minimum. All without his knowledge. “Tuesday I wasn’t worried, Wednesday I wasn’t concerned, but when Thursday came I knew there was a problem. There is no use pretending otherwise,” he said.

People driving around Long Branch and other towns couldn’t help but compare the difference between road conditions.

The LINK News received calls and Letters to the Editor about the roads saying the same thing — streets in Long Branch were horrible. No one mentioned one part of town getting more attention over another, though. They all seemed to be equally bad.

Schneider said that proper preparations were not made before the storm.“If you get behind on something like this all you can do is react, problems get worse and worse.”

Schneider made sure that road crews were on the job on Friday working overtime, plowing, taking care of the problem.

He plans on holding meetings to see where the problems stemmed from and that it never happens again. He said that in his years as mayor he has never had as many complaints about snow removal as with this storm. “The way those storms were handled was spot on,” Schneider said. He said, ultimately, as mayor of the city, he would have to accept the blame. “But I’m not accepting any excuses,” he said.