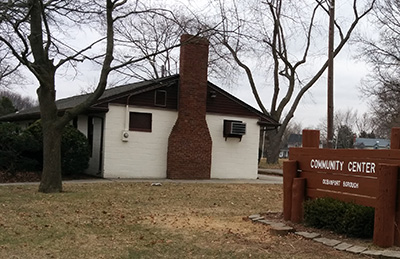 The Oceanport Library will be moving to the Community Center since the Borough Hall has become dangerous.

By Neil Schulman
Oceanport — Borough Hall will soon be emptied due to structural damage, as officials decide whether it is worth repairing or if new facilities should be found.

The Oceanport Library will be moving to the Community Center and borough offices will be moving to the Old Wharf House. New police facilities are also being sought.
At the Jan. 16 Borough Council meeting, Borough Administrator John Bennett described the work being done to the buildings to get them into shape for their new uses.

“As you know, the abilities to stay in Borough Hall are severely limited,” he said.
When Superstorm Sandy caused hit in 2012, it caused significant flood damage to the building. While some repairs were made – the library reopened late last year, and offices work there, other parts have been unusable.
The meeting room is one of those places; since the storm the council and other boards have met at Maple Place school. The police department is operating out of trailers, and is currently looking for a slightly more permanent residence.
Bennett said that minor repairs are being made to the Community Center and Old Wharf House to get them into better shape. These include things like coats of paint and capping unused chimneys for fire places. He said the expenses were light.

He believes that the federal government may pay for Oceanport’s relocation costs, as it is a storm-related expense.
“We are only leaving borough hall because of superstorm Sandy,” he said.

Bennett said that he’s been looking for spaces for the small recreation groups which will be displaced by these moves. The local pastors have offered the church as a meeting space, he said.
Mayor Michael Mahon said that they have determined that “Borough Hall has reached a point where it can no longer be occupied for any period of time.”

The mayor said an architectural firm was being hired “for plan B,” though council is still determining what the details will be.

For the past several months, council has been studying whether to repair the building, find other space in the borough, or look for a building on the closed Fort Monmouth property which could be used.
Bennett said that the reason for the move is long term structural concerns, not mold or other health problems. Employees are in no danger staying there until the new space is ready, he said.

The Oceanport Library will be moving to the Community Center since the Borough Hall has become dangerous.

“I don’t want to infer it is an air quality issue; it is not,” he said. “It is not an imminent health danger.”