Officials: nothing improper about library demolition 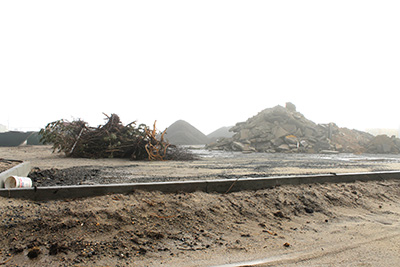 Some Sea Bright residents were not happy when they found the library was razed over the weekend.

Read this week‘s LINK News for an update

By Neil Schulman
Sea Bright — While some residents insist that the borough demolished the library prematurely and without enough notification, officials say there was nothing improper about the procedure – and that since no official date had been set for the demolition, it wasn’t premature.

Some Sea Bright residents were not happy when they found the library was razed over the weekend. 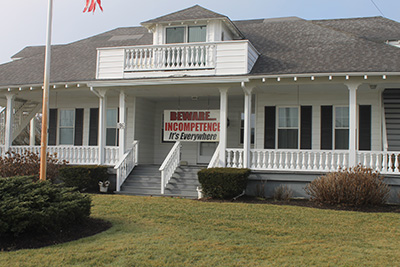 This Ocean Ave. resident made sure his displeasure over the decision to destroy the library was displayed for all to see.

On Saturday morning, Jan. 11, the library, which had opened in the early 1990s, and had been closed since Superstorm Sandy, was torn down.

At Tuesday’s Borough Council meeting – the first since the library’s destruction – numerous residents came to complain about the process and lack of information.

Borough resident Charles Rooney said that on Dec. 17, 2013 council had voted 4-2 to knock down the building following a high estimate for the cost of repairs.

Earlier in 2013, council had voted to restore the library, based on the fact that an estimate for repair work came in at about $70,000 and the insurance would provide up to $95,000 for repairs. However, by December, a different estimate suggested the costs would be more than $209,000.

As a result, council voted to tear down the library, and build a new one as part of an expanded bathing pavilion.
Rooney, who showed a photo of his late  father, mayor Charley Rooney, outside the library when it opened in 1992, said more investigation should have been done, due to the extreme cost differences.
“How did we go from $70,000 to $209,000?” he asked.

On Jan. 8, Rooney visited the library with an electrical contractor, who not only thought it was in good shape, but said he would be willing to donate labor costs. Rooney contacted Councilman Brian Kelly, and said he would like to tour the building with him on the afternoon of Saturday, Jan. 11. Rooney believed the library was scheduled to be torn down Jan. 13.

But two hours before he and Kelly were to meet, demolition crews came and tore the building u“What was the major rush in tearing down the building?” Rooney asked.

Other residents also spoke about how quickly and suddenly the demolition took place. One said that she had asked on Friday to take down the signs for the new building, and was assured she would have time over the weekend to do so. Instead, people had to sort through the rubble to find the sign.

Liz Von Ziegesar, Chair of the Sea Bright Trust Advisory Committee, which oversees the library, said that council had ended up destroying “the one focal point our residents knew for 20 years,” a place used not only for books, but to socialize, host art exhibits, and more.

Several people said that there had been no time for council to hear objections. After December 17, no council meetings were scheduled until Jan. 21 (which was cancelled due to the snow). But borough officials said that nothing improper happened. After they voted to demolish the project, it was put out to bid, and a contract has awarded.

Councilman Read Murphy said that the work was done on Jan. 11 because the contractor was available.
“The contractor showed up with his equipment and asked our superintendent (of public works),” Murphy said.
Councilman Marc Leckstein said that council only voted to demolish the library, not to demolish it on a certain date. “There was never a set date. Who said there was a date…. This is the first time I ever heard,” he said. Mayor Dina Long said that she believes that everything was done legally. “To suggest the borough acted improperly in demolishing the building, I do not think it’s fair or factually correct,” she said.

Long said that there should have been more communication with the library committee and other concerned parties, who generally found out about it second hand. Long said that she would have preferred to keep the structure, but the mayor only has a vote when council is tied on an issue.

The new library
Kelly said that a new permanent library, part of a lifeguard station and beach facility, would be completed by Memorial Day 2015 at the latest.

The station had originally been planned as a 2,200 square foot facility, but since the library was added, engineers are looking at a much bigger structure, tentatively closer to 6,000 square feet.

In the meantime, council will be bringing in a double-wide trailer, with restroom facilities, to act as a temporary library. When the Middletown Library closed a branch last year, they donated the books and supplies to Sea Bright. Those are currently in storage. The demolition of the library will mean more room for visitors in the summer, allowing approximately 21 more spaces in the municipal lot. In addition to the freed space from the building, the borough will also be able to remove several telephone poles in the lot which only provided power to that one building.