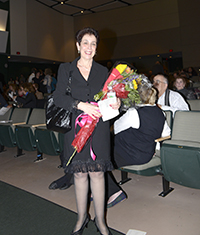 ­By Walter J. O’Neill Jr.
Long Branch — By hundreds of accounts, Vincent J. Borelli was a man who touched the lives of generations of students and fellow educators in ways that words simply can’t describe.

To many at Long Branch High School he was known as “Mr. Borelli,” “Borelli,” “Vinnie,” “Mr. B,” or just “B”. In 1972 Vinnie brought his unique and extremely talented personality to Long Branch Public Schools. He was a teacher of the Visual and Performing Arts until his retirement in April 2005. For decades he was the mastermind behind the award-winning Westwood Players, putting on so many plays that he once remarked that he was running out of shows to produce.

As his wife and fellow co-worker, Angela Borelli, stated, “How ironic that he would leave us on April 20, 2005 at 8:00 p.m., exactly curtain time for what would have been the opening night performance of Anything Goes.”

It was a rare form of eye cancer, metastatic uvial melanoma, which took Vincent Borelli from this stage of life.

On Saturday, February 22, the Long Branch Board of Education officially dedicated the theater at the High School in the honor and memory of Vincent J. Borelli.

“My daughters Anna, Antonia, and I would like to thank you all for attending the dedication of this beautiful auditorium to our beloved Vinnie, daddy,” said Angela.

Then she had special words for the Long Branch Board of Education and the administration. “We extend our most sincere thanks for this wonderful tribute to the devoted students who gathered together and made it their mission to have this auditorium named, we are truly grateful. It is hard to believe that almost nine years have passed. But today is not about sadness and tears, today is about remembering and celebration.”

The board had voted to rename this auditorium in October 2013. Originally the Long Branch Board of Education had dedicated the auditorium in the “old” high school the Vincent J. Borelli Theater in 2006, but shortly after that the school was closed and the new school was opened.

Michael Salvatore, Superintendent of Schools, stated that due to delays in the restoration of the “old” High School and the uncertainty of when that facility will be back in use, the Board of Education wishes to transfer the honor of naming the “new” High School auditorium after Vincent J. Borelli.

“This is a wonderful gesture. Nobody gave more to LBHS than Vinnie Borelli,” said James Simonelli, former head principal of the High School. “Thanks to any and all who made this happen. It is only fitting that the facility he designed bears his name.”

“The way it should have been from the beginning!” said Terry Janeczek, a former co-work of Borelli. “What a great teacher and a great friend. Miss him all the time.”

“Long overdue!” said Darlene Biasi. “Vinnie Borelli was a gifted teacher who brought the best out of any student who was fortunate to have had him. He was an amazing father and friend as well.”
Danielle Drakes, LBHS class of 1997, said that Borelli had instilled in her the importance of the arts and how it builds confidence. She is now a professional actress with a master’s degree and teaches and produces theatre in Washington D.C.

Michelle Begley, LBHS class of 1982, recalled a bus beeping outside her house at 6:30 in the morning on a Saturday and then hearing the booming voice of Borelli yelling at her to get out of bed and get ready for the forensics tournament. “I was trying desperately to blow off that tournament,” said Begley. “At the end of the day I was always glad he dragged me out kicking and screaming.” Today, Begley is a professional actress living in Los Angeles.

Anita Woolley-Nelson, LBHS class of 1998, said she is a lifetime student of Borelli. “I finally got what he was trying to tell us about laughing at oneself. He was very clear about the fact that laughing was much better way to spend one’s time than winning,” said Woolley-Nelson. “When I think of him, I think of a man who would show us the steps, show us on our way, but always be there in case we were lost and he’d be sure we were recognized if we found our way to success. I am forever changed because of this man.” Today, Anita is the Vice President of Strategic Planning for Tishman Construction Corporation.

So many people had so many positive memories of Borelli that we just can’t publish them all. The dedication ceremony was something Borelli would have been proud of. It started with a video of his life, photos and interviews with family, friends and co-workers. It showed the funny, personal and unique side of the man.

Then the curtain went up and the Long Branch High School Symphonic Band played the “Opening Night Broadway” and Mary L. George, Board of Education member, welcomed the 200 plus in attendance to the ceremony.

Cast members of the Westwood Players then performed a medley from “Godspell” to a standing ovation. That was followed by remarks by Vincent Muscillo, lead principal of Long Branch High School, who was a student of Borelli.

“It is ironic that an educator so dedicated to his students never saw his own daughters, Annamaria and Antonia, graduate from high school and college. It is ironic that a man with so much love in his heart never got to walk his daughter down the aisle last July 27 as Antonia married her love Richard,” said Angela. “I am not going to lie, with this rededication these past few weeks it has stirred up so many memories and feelings that you just put away in order to function on a daily basis. I known he is smiling down on us today, he is truly the star of the show.”