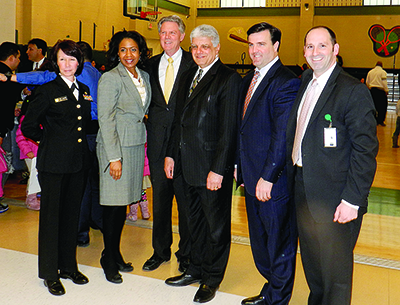 Groups call on public to enroll for Affordable Care Act 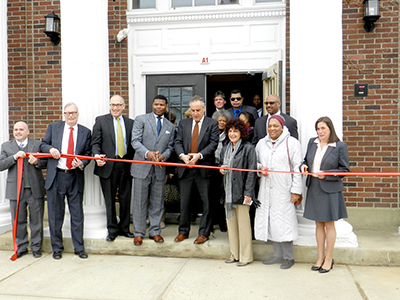 A ribbon is cut to mark the opening of the first phase of the Gregory Senior Residences, in the old Gregory School building.

By Neil Schulman
Long Branch — The Long Branch Housing Authority held the grand opening ceremony for Gregory Senior Residences and Maestro Annex on Monday, and also kicked off the second phase of the $30 million project.

Officials at the opening ceremony said that the new affordable senior housing, at the former Gregory School, was a joint effort between the Long Branch Housing Authority, private companies, and local, state and federal officials.

“Projects like this don’t happen unless you have a strong partnership,” said Donna Reneiro, of the New Jersey Housing and Mortgage Finance Agency.

Reneiro noted that you could still see this used to be a school. The presentation was given in the former auditorium, which has been turned into a community room.

Projects that reuse an existing building are environmentally friendly, she said. They also allow a building to have a character you don’t see in new construction.

“This is truly a public and private partnership,” said Tyrone Garrett, Executive Director of the Long Branch Housing Authority.

When the Long Branch School District wanted to build a more modern school (the new Gregory School is located on Monmouth Avenue), they donated the old building, parts of which are 90 years old, to the City of Long Branch.

The Housing Authority purchased the property from the city, and with the help of its partners, Conifer Realty, the Metro Company, Maestro Community Development Corp. and others, have completed the first phase of the project, creating 65 units at a cost of $16.5 million.

The second phase, officially begun on Monday day, will bring the total number of units up to 117, and is estimated to cost $13.5 million.

Due to the historic nature of the building, many characteristics have been preserved.
Speakers said that the project encountered some difficulties in the first phase. Work started in September of 2012, and Superstorm Sandy hit the shore the next month. Workers and managers had to struggle to build this project while dealing with problems such as damage to their own homes.

Mayor Adam Schneider said that his children, and many others, attended school at the Seventh Avenue building, and he was glad to see it used for a new purpose. He said that the appearance of the Gregory Senior Residences, and all the housing authority’s new developments, was top notch. “Nothing that’s happened here would look out of place if it was on the oceanfront in Long Branch,” Schneider said.

Garrett noted in the last seven years, the LBHA has been involved in nine tax credit programs, projects to improve and increase the affordable housing in the city.

The LBHA’s success has become a model for others. Garrett said that over the weekend, he spoke to a housing authority in Chicago, which was looking at modeling its program after Long Branch.
And he’s thinking what’s next for the city. “My mind is turning now to our next step,” Garrett said.

A ribbon is cut to mark the opening of the first phase of the Gregory Senior Residences, in the old Gregory School building. 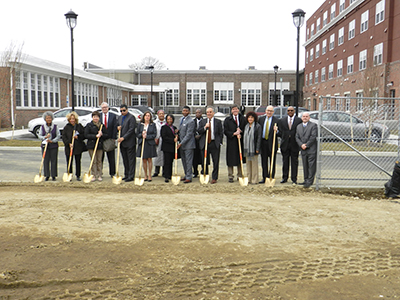 Officials kick off the second phase of the Gregory Senior Residences and Maestro Annex, which will add another 52 units to the project. 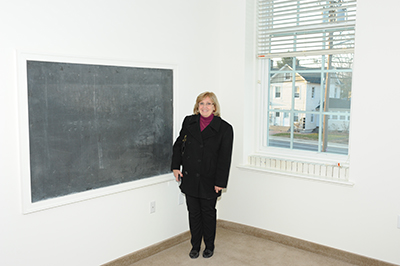 Cathy Scarlata, a retired teacher, who taught in Gregory School’s classroom #2 stands in her old room, which is now a living room. The blackboard from the original classroom was kept a part of the decor due to the historic nature of the building.