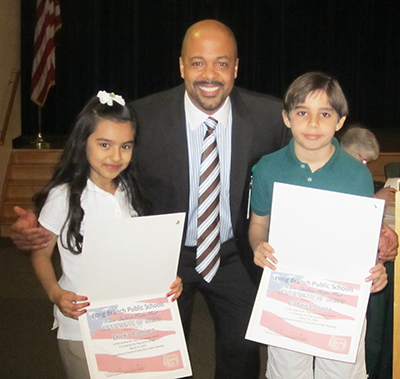 Long Branch — On March 19, the Long Branch Board of Education held is monthly public meeting at the Middle School. The evening started with Alvin L. Freeman, Assistant Superintendent of Schools introducing Ericka Ramirez and Gabriel Souza of the Audrey W. Clark School as the two students leading the Flag Salute and Pledge of Allegiance. 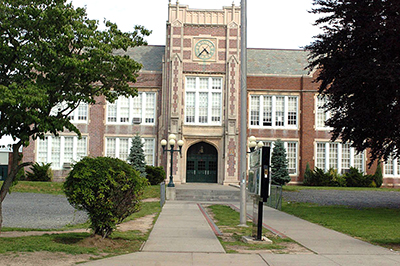 Long Branch Board of Education is planning on using the $3 million from the recent sale of West End School the to get the doors open to the old high school.

, physical education teacher at the Morris Avenue School. The Support Staff of the Month Award was presented to Hadija Haskovic, instructional assistant at the Gregory Elementary School.
* * *
A vote was taken by the board to approve and submit a tentative FY2015 budget to the Monmouth County Superintendent of Schools. Each district must turn in a budget to the county on or before March 20, 2014 for approval. The district will hold a public hearing on the budget on April 30.
The board also voted on a resolution stating the district has fully exhausted all eligible statutory spending authority and must increase the base budget in the amount of $2,026,524 for the purposes of funding required expenses needed to meet a through and efficient education.

Michael Salvatore, Superintendent of Schools, stated that this district does not plan on holding mass layoffs. However, the school tax rate will increase slightly as the salary and health care costs keep going up.

He added that in the budget they plan on opening part of the old high school, using some of the funds from the sale of the West End School.

The board also approved to go out for bid on partial roof replacement at the Lenna W. Conrow School, and to get a bid for the FY2015 Wrap-Around Program. One other bid that the board is putting together is for the food service. Currently Sodexo is the district food provider and a new bid is going out for the FY2015 year.

Under personnel action the board accepted, with regret and best wishes, the retirement of Catherine T. Beatty, a teacher at Morris Ave. School, with 25 years 11 months of service. Lawrence Heptig, a drama teacher from the Amerigo A. Anastasia School, also announced he is going to retire after 27 years service. Robert Gant resigned as a biology teacher at the Alternative Academy effective March 12, 2014.